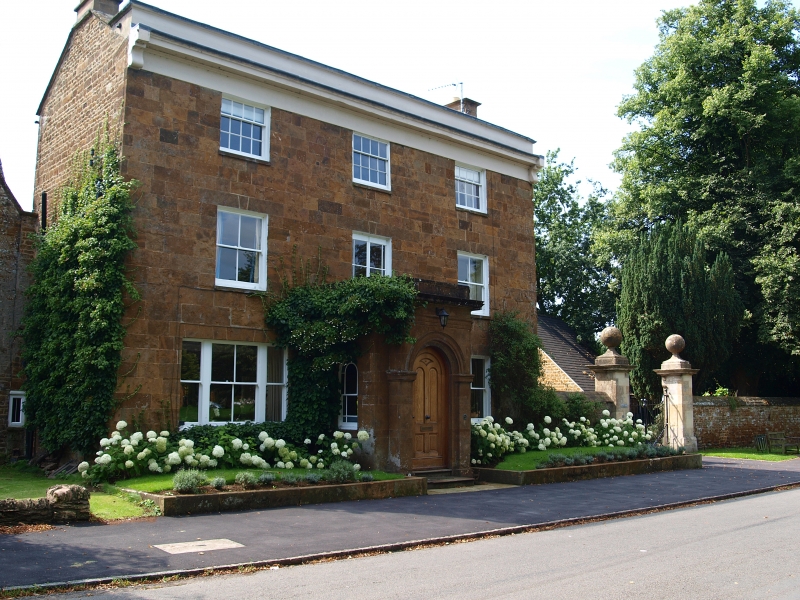 GV II
Substantial house. 1824, altered and extended late C19; wall and gatepiers late
C17. Marlstone ashlar and coursed squared rubble; brick; Welsh-slate roofs with
ashlar and brick stacks. Probable central-stair plan with rear wing. 3 storeys
and 2 storeys. 3-window ashlar front of taller main range has 4-light sashes at
ground and first floors, except for a late-C19 tripartite sash to left of the
entrance, and has shorter 12-pane sashes at second floor; cornice and plain
parapet are rendered and painted, and conceal a shallow-pitched roof with gable
parapets bearing ashlar stacks. Late-C19 ashlar porch has an arched entrance and
side sashes plus a stone entablature. Hipped-roofed brick rear wing has further
sashes. Interior not inspected. Rubble wall, to right of the house,
approximately 2 metres high with a 3-course triangular coping, is broken by a
gateway with early-C19 iron gates and 2 large square limestone-ashlar piers with
chamfered plinths, cornices and large ball finials, from which the wall extends
approximately 30 metres to a further gatepier, part of the entrance to The
Orchard. See also "Wall and gatepier approximately 15 metres north of The
Orchard (not included)". Walls and gatepiers belonged to the large C16/C17
Mansion of the Cobb family, demolished 1815, a stone from which inscribed 1582
is re-set in one of the gatepiers.
(Buildings of England: Oxfordshire: p4i8; VCH: Oxfordshire: Vol IX, pll)