A Grade II Listed Building in Clifton, City of Bristol 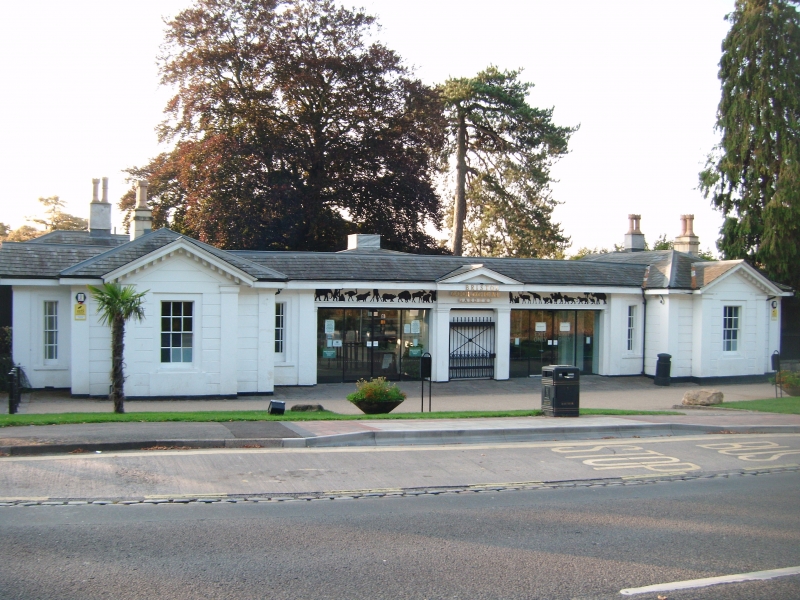 Entrance lodges to Bristol Zoological Gardens, built in 1836, with associated flanking walls and railings. The link building between the two lodges was designed by CFW Dening and added in 1934. Late C20 and early C21 alterations. The extensions to south side of the link building and the west lodge are not included in the listing.

Entrance lodges to Bristol Zoological Gardens, built in 1836, with associated flanking walls and railings. The link building between the two lodges was designed by CFW Dening and added in 1934. Late C20 and early C21 alterations. The extensions to south side of the link building and the west lodge are not included in the listing.

MATERIALS: constructed of limestone ashlar with hipped and gabled roofs covered in slate tiles. The stacks are of limestone with clay pots. Timber sash windows.

DETAILS: designed in a neoclassical style, each lodge has overhanging eaves and is articulated by its cruciform plan with Doric pilasters emphasising the corners. The north elevation has a central pediment with a dentilled cornice and a six-over-six sash window, with subsidiary two-over-two sash windows with margin lights. The windows are set within recessed plain surrounds. The setback link building is of three bays with Doric piers supporting an entablature with a frieze of animal silhouettes over the wider outer bays. The central pedimented bay is slightly set forward and has an iron gate featuring rosettes and fluted verticals, and blocked octagonal openings to its side elevations. The doors to the inner elevations of the lodges have consoles supporting triangular-shaped pediments, with further door and window openings to the side elevations. The rear elevation of the east lodge has a wide central bay with a triangular pediment over an arrangement of a six-over-six sash window flanked by six-over-nine sash windows. The openings to the side and rear elevation of the west lodge have been modified and the original doors and windows removed.

Bristol Zoological Gardens opened on the 11 July 1836, becoming the second zoological garden to open in England, after London Zoo in Regents Park (1828), and the fifth in Europe; the others being Schönbrunn Zoo in Vienna (1752), the Jardin des Plantes in Paris (1800), and Dublin Zoo (1831). Many more were to follow, illustrating the rapid and extensive establishment of zoological gardens, alongside other C19 cultural institutions such as museums and galleries, that were being built in England and across Europe to exhibit and study the exotic animal, plant, and cultural specimens that were being provided by empire and colonisation.

Bristol Zoological Gardens was founded by The Bristol, Clifton, and West of England Zoological Society that was formed in 1835 with the intention of creating a zoo for the purposes of both education and entertainment. The society raised the funds for their venture through the sale of shares, with many prominent Bristolians, such as Isambard Kingdom Brunel, William Goldney, and members of the Fry, Wills and Sturges families, being among the first shareholders. They were subsequently able to purchase 12 acres of land to the north of the suburb of Clifton on the outskirts of Bristol.

The design for Bristol Zoological Gardens was produced by Richard Forrest. A landscape designer and nurseryman, Forrest, was well-respected in his field and during his career worked on several important commissions including the gardens at Syon House, London, and Eaton Hall, Cheshire, as well as producing designs for several other zoological gardens. As with all early examples of zoological gardens, the design for Bristol was much influenced by the C18 landscaped gardens of the aristocracy, and this can be seen in Forrest’s scheme that retained many of the existing mature trees, but also including the planting of specimen trees and plants, the excavation of a lake to the centre, the creation of a Grand Terrace for promenading, as well as buildings in a characteristic pavilion style. Comparison of Forrest’s plan with George Ashmead’s map of 1853, alongside knowledge of the financial restrictions of the project, suggest that Forrest’s plans were not fully implemented. Ashmead’s map shows a simplified version of Forrest’s scheme with the animal enclosures concentrated to the north of the Grand Terrace, with most of the site being given over to gardens. This would seem to reflect both the difficulty in meeting management costs and that the botanical rather than the animal attractions were the initial draw for visitors. To increase revenue, the site was increasingly hired out for events, becoming a place not only to enjoy the plants and animals, but also a place of entertainment.

From the mid-1850s the surrounding land was developed for housing, and in 1862 the first buildings of Clifton College, located to the immediate south, were built. This development and the later Bank Holiday Act of 1871 led to an increase in visitor numbers leading to extensive changes to the zoo with a clear focus on public entertainment. The new animal enclosures added at this time, such as the elephant and giraffe house, and the polar bear enclosure that abutted its north elevation, were built in domestic styles and reflected the then architectural trend to place foreign wildlife into an English domestic setting.

In the early C20 the zoo suffered a period of stagnation, and the standard of the site declined. However, from 1925, the influence of Dr Richard Clarke as director of the society, began to steer the zoo towards the promotion of knowledge through the quality of the botanical and animal specimens, and away from the pleasure ground aspect of the site. He proposed that 'every year a new feature should be built and shewn annually' to attract increased visitor numbers. He consequently ushered in a new profitability and animal focused philosophy, with the new buildings in modern and interesting settings. These new buildings were often designed under his guidance, with some showing the influence of Carl Hagenbeck’s zoo at Tierpark, Stellingen, near Hamburg (1906), and his ideas for the presentation of animals in their “natural” habitat, with the creation of panoramas, artificial rock formations, and the removal of cages. The Monkey Temple (1928) and the polar bear enclosure (1935) were particular examples at Bristol Zoo.

Further changes occurred throughout the C20 and C21, with a move to more hygienic enclosures with tiled surfaces, to increasingly natural and open environments as animal welfare and conservation became central to the zoo’s philosophy.

The entrance lodges to Bristol Zoological Gardens were built in 1836 and formed part of the zoo’s original formal layout as designed by Richard Forrest. The lodges were originally connected at the rear by a low wall surmounted by railings, with pedestrian gates to either side of a wide central gateway with an iron overthrow incorporating the words “Zoological Gardens” and a suspended central lamp. In front of the pedestrian gates were turnstiles and in front of the central gate stood a wooden ticket booth.

In 1929, Dr Richard Clarke commissioned the architect CFW Dening, who undertook a number of commissions at the zoo, to remodel the north entrance. The works were completed in 1934 and connected the two lodges with a single-storey linking structure that comprised a central pedimented bay flanked by wide openings with a frieze of animals in silhouette above. Gates were added to the openings, but these were replaced to the outer bays with automatic doors when the structure was enclosed and extended in the late C20 and early C21.

The North entrance lodges, with flanking walls and central link building, are listed at Grade II for the following principal reasons:

* for their sophisticated pavilion design in the neoclassical style with Greek cruciform plans and good attention to architectural detailing, form and massing;
* for the sensitive addition of the link building between the two lodges designed by CFW Dening, who played an important role in designing various buildings at the zoo in the 1920s and 1930s;
* for the good degree of overall survival of both the lodges and the link building.

* built in 1836, they are an early example of a pair of entrance lodges associated with the first phase of zoological gardens in England during the 1830s, and their design and form illustrates the influence of the C18 landscaped garden on early zoo buildings;
* as part of the original formal landscape design for Bristol Zoological Gardens by noted landscape designer Richard Forrest.

* with the other listed buildings at Bristol Zoological Gardens.