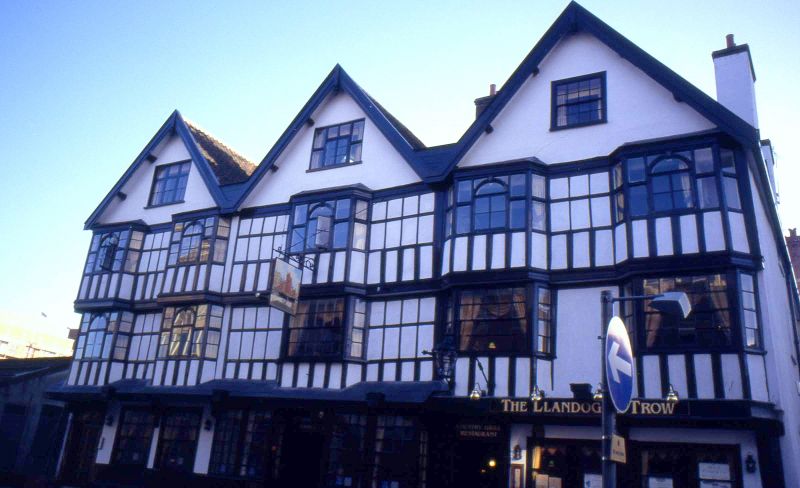 Row of 3 houses, now one public house and restaurant. c1665,
partly refenestrated C18. Timber box frame with stone party
walls, brick lateral stacks and pantile roof.
Gabled fronts at right angles to road, each with central
right-hand stair-wells between 2 lateral stacks, opening to a
central lobby between front and rear rooms.
3 storeys, attic and basement; 5-bay range. A fine range of 3
equal gables, jettied above the ground and first floors with a
slate pent over the ground floor, moulded fascia boards and
boxed eaves. Ground floors of outer houses articulated by
Jacobean Ionic pilasters with lozenges, beneath moulded
brackets, and left-hand doors.
No.3 has a framed 16-panel door, and two 8/8-pane sashes above
a left-hand segmental-arched basement hatch. No.4 has a C18
shop front with central C20 door, deep bays each side with
paired 12/12-pane sashes to the right and two 24-pane windows
to the left. No.5 has a framed scratch-moulded 16-panel door,
and 2 pairs of plate-glass sashes above brick nogging. Upper
floors have exposed ovolo-moulded close studding, beneath
continuous full-width fenestration, now blocked, between 2:1:2
2-storey canted oriels containing Ipswich windows to No.3 and
the second floors of Nos 4 & 5, which have 12/12-pane sashes
to the first floor; the attic has 3-light mullion and transom
windows to Nos 3 & 4, and 8/8-pane sash to No.5.
Right return a 1-window range with C17 mullion and transom
casements, and 2 lateral stacks set in small gables. Rear
gables each 1-window range with late C19 sashes, with a
2-storey oriel to No.5 beneath a second-floor pent roof.
Attached late C20 kitchen blocks.
INTERIOR: good C17 plaster ceilings, and cyma-moulded beams
with bar stopped chamfers. Central right-hand framed dogleg
stairs with thick turned balusters, square newels with ball
finials, and moulded rails, opening into central first-floor
lobbies. Ground and first floors divided into narrow
compartments by moulded beams, with plaster quatrefoil
patterns, featuring Adam and Eve-style figures, pomegranites,
fleurs de lys, most ornate in the first-floor former Great
Chambers to the front.
The ground floor of No.4 has a narrow front compartment
representing a former shop. Scratch-moulded first-floor
panelling to No.4 with incised decoration, various dates from
late C17. Ground-floor front room to No.3 fully-panelled with
bolection moulding, now linked to No.4; C20 kitchen to the
rear. Rear room of No.4 has a C17 carved N German overmantel
depicting the Nativity, and a shell-hood corner cupboard to
the left. No.5 has a rear door with stopped moulded frame,
panelled doors from the stair well, which is restored on the
ground floor and has an ovolo-moulded cross window and
casements with turn buckles. First-floor C17 stone fire
surrounds to Nos 3 & 5 have Tudor arches and stopped
mouldings.
Originally part of a range of 5 houses with shops on the
ground floor, prefiguring later terrace forms, of which 2 were
lost in the last war. The finest group of C17 timber-framed
buildings in Bristol, retaining original plan forms. Similar
plasterwork can be found in No.33 (qv).
(Gomme A, Jenner M and Little B: Bristol, An Architectural
History: Bristol: 1979-: 84; The Buildings of England: Pevsner
N: North Somerset and Bristol: London: 1958-: 433).