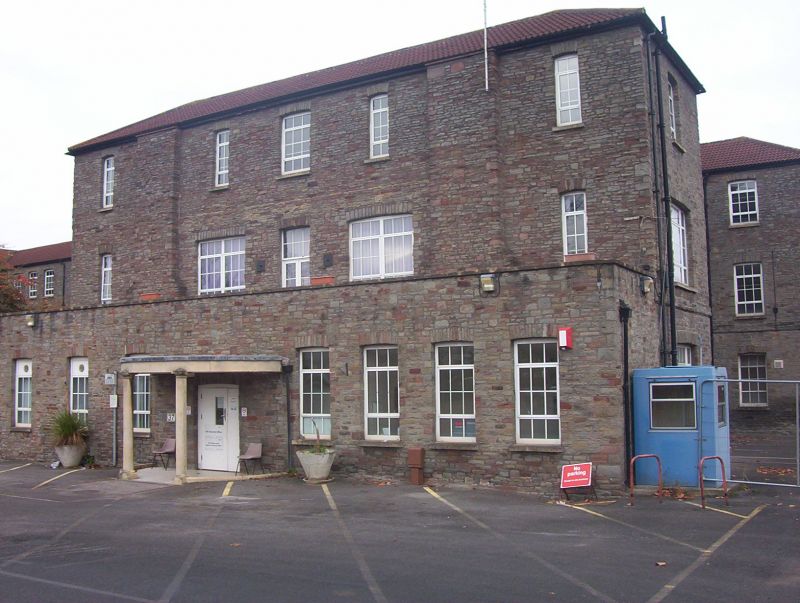 Prisoner of war camp, work-house, now hospital. c1779.
Work-house from 1837, extended 1865, and hospital since 1946.
Pennant rubble with limestone ashlar porches, exterior stacks
and interlocking tile hipped roof. Axial, E-shaped plan.
3 storeys; 5:9:3:9:5-window range. A symmetrical front has a
3-window central projecting block, and 5-window T-shaped end
wings, with a central C19 porch with columns to a flat canopy;
C20 porches to the other ranges except the left-hand one.
Cambered rubble heads to late C20 windows. The side wings are
articulated by pairs of exterior decapitated stacks. Large
1861-5 five-window extension to the left has semicircular
ground-floor arches with chamfered surrounds, now glazed.
INTERIOR: remodelled C20.
HISTORICAL NOTE: constructed by the Admiralty as a prisoner of
war camp, holding prisoners from the wars with the American
colonies, and with France from 1793, an early and important
example. The other is at Yaxley, Cambs. Converted by the Poor
Law Commission, and a lunatic asylum from 1870.
(Site Record, Trial Survey of Gardens, etc. ACCES: Harding S:
SMR 2794: Bristol: 1987-).