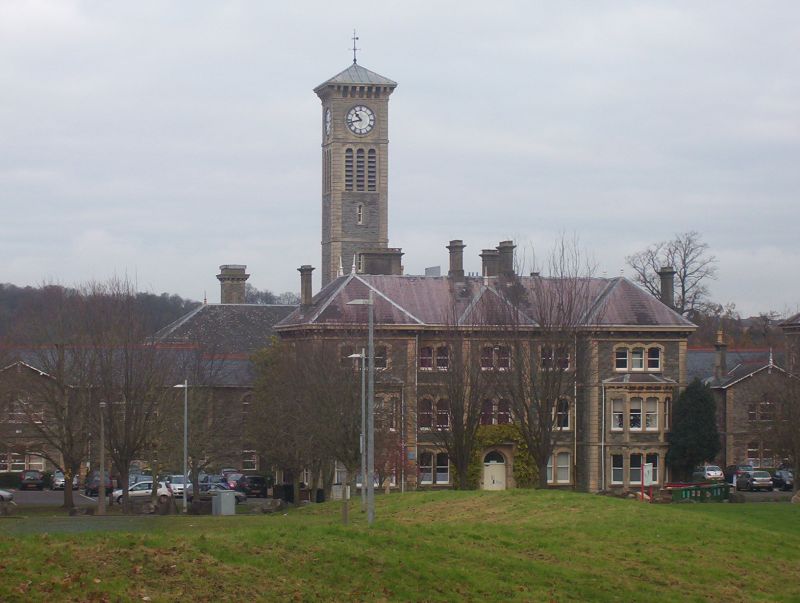 Mental hospital now University of the West of England Campus. 1861. By Henry Crisp. Subsequent additions by Crisp and Oatley.

EXTERIOR: Italianate style. The central administration block is three storey; five bay range with rusticated quoin stones, plat bands on each floor with deep corbelled eaves. Two storey canted bays either side of the central round-arched doorway. Plate-glass sash windows with segmental heads, round-arched on the middle of the first floor, with ovolo mouldings under the arches. Behind is the recreation hall, beneath a clock tower with clasping pilasters, three-light louvered belfry windows, clocks to each face and a shallow lead roof. Symmetrical wings of two storeys with central gables and a three-storey tower with pyramidal roofs. The projections end in gables flanked by squat towers; the inner ones have a central blind round arch, with segmental-headed ground-floor, and round-arched first-floor windows; the outer gables are similar but wider. Later blocks in a similar style.

The laundry and powerhouse block to the north-west is a two storey range which houses the steam engines to the ground floor and the laundry to the first floor. The tall square laundry chimney no longer survives.

The steam engines to the powerhouse were manufactured by Bellis & Morcam of Birmingham and are a reciprocating steam self-generation power plant of a type once common throughout much of the NHS hospital sector and the British manufacturing industry more generally.

HISTORY: The Lunatic Asylums Act of 1845 made the erection of county pauper asylums compulsory and Bristol Lunatic Asylum (Glenside Hospital, now known as Glenside University Campus) is one of the 63 built between 1845 and 1888. Fishponds was approved as a site for a lunatic asylum in March 1857 and in 1858 works started on Henry Crisp's design. Bristol Lunatic Asylum opened in 1861, even though the building was not yet complete. The pavilion plan, a characteristic feature of asylum design by 1861, was later enlarged in stages by architects Henry Crisp and George Oatley and the spaces between the wings became enclosed gardens. The Asylum was nicknamed `The Lunatic Pauper Palace' because of the cost of the building and its architectural grandeur.

REASONS FOR DESIGNATION DECISION: Glenside Hospital is designated at Grade II for the following principal reasons:
* A good example of a pavilion plan lunatic asylum
* The principal rooms such as the recreation hall and library survive well and retain their original features such as coffered ceilings
* Good group value with the Lower Lodge and Glenside Hospital Chapel, both listed at Grade II