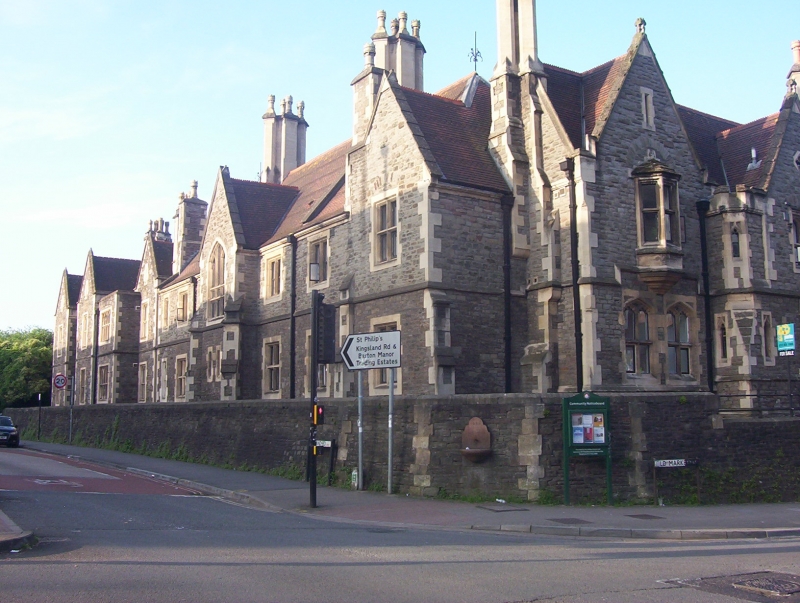 Almshouses, now flats. 1402. Founded by John Barstaple.
Rebuilt 1857-58 NE block, 1867 chapel and W block, 1881-83 SE
block, by Foster and Wood. Squared Pennant rubble with
limestone dressings, brick, limestone ashlar ridge, gable and
exterior stacks, tiled hipped and gable roofs with decorative
ridges.
Double-depth plan, parallel ranges of 3 E blocks and 2 W
blocks and a chapel to opposite sides of a courtyard. Tudor
Revival style, later blocks with Burgundian Gothic influence.
2 storeys. Symmetrically-fronted blocks have coped parapets
and gables, mullion and transom Tudor-arched windows with
metal casements, label moulds, sill bands and drip courses,
oak doors with linenfold panels and carved posts to upper
glazing, stacks with corbelled cornices, and much carved
decoration.
The 1867 NW block (drawings 1864) of 5 gables, the end ones
projecting with finials; entrances in the angles with the end
gables have steeply pitched porches with carved oak sides and
steps up. 2 cross windows to the middle gable, 3-light windows
to the others, those at the ends with trefoil heads and sunken
traceried panels above and shield label stops inscribed JB;
carved animals link the string across the downpipes, and
first-floor corner gargoyles.
Fine rear elevation has end gables and a central section set
back to form a small courtyard, with wide arches to dogleg
stairs at either side, flanking stout columns to a bracketed
gallery on 3 sides beneath extended eaves, with traceried
panels.
The 1867 SW block has projecting gabled ends and a central bay
with brick between, and linked by galleries below the
sprocketed eaves; canted outer bays with balustrades and
trefoil-headed windows; middle full-height bay has full-width
5-light windows, and a timber-framed gable with brick infill;
right-hand doors below the galleries with left-hand 3-light
windows. The rear has a crenellated right-hand block and 4
gables, the left-hand pair separated by the eaves extending
through the parapet over 2 carved oak open arches.
The E range is 2 linked blocks: 1881 SE block mirrors that
opposite, but crenellated right end block, and good, carved,
open oak stair turret to the middle, with spiral stairs to
gallery and a conical roof with lead finial. Rear elevation
has 4 projecting gables with cross windows and 4-light windows
between; in the end elevation is a canted bay.
The 1858 NE block almost mirrors that opposite, with single
pitched canopy to central doorway, taller stacks and linking
block to S. The rear elevation has a central projecting gable
with diagonal buttresses, arrow slits on ground floor, 3-light
first-floor windows, and exterior stack to left.
At the N end is an asymmetrical block fronting Old Market
Street, with a right-hand entrance and pitched canopy beneath
a 4-light window, and a central square stair turret; in the
end gable is a canted bay beneath a 3-light window and panel
inscribed FOUNDED BY JOHN BARSTAPLE/ REBUILT MDCCCLVII. The
road front has 2 projecting gables with cross windows and a
large exterior stack to the right.
The chapel has a 3-light 'E' window with Perpendicular tracery
and an ogee hood, with crocketed niches either side and above;
5-bay 'N' side has a battered lower wall, developing
buttresses between 4-light aisle windows under an ashlar
parapet, and a gabled right-hand cross wing with 2-light
window; 3 clerestory windows have 3 lights, a wide stack to
the right, above a bellcote to the back of the cross wing.
4-light 'N' window with rectilinear tracery. From the 'N'
gable a revetment wall extends along the Jacob Street
elevation of the W range, with a plinth and 2 brick sections
with quatrefoils and wrought-iron stanchions and braces.
INTERIOR: chapel has a glazed tiled E end, painted inscription
at the top of the wall, and a C20 mezzanine above angel
corbels. Flats have open-well stairs with chamfered balusters
and ball finial newels, half-glazed panelled doors with
wrought-iron studs, built-in shelves and cupboards, and open
ceiling joists.
SUBSIDIARY FEATURES: attached walls and railings on curved
brackets enclose the galleried courtyard to Jacob Street, with
2 good wrought-iron lamp baskets hanging over the gallery
stairs, and also the area to the SW.
HISTORICAL NOTE: the design of the almshouses became more
French-influenced during their reconstruction, and shares some
features, such as the open spiral stair, with the Fosters
Almshouses (qv) of 1861.