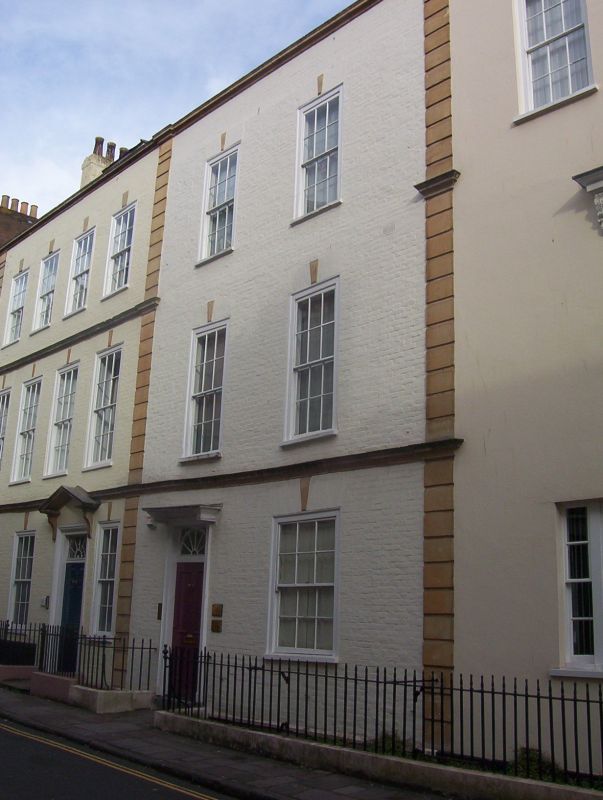 GV II*
Attached house. 1717-22. Painted brick with limestone dressings, brick party wall stacks and a pantile roof. Double-depth plan. Early Georgian style. 3 storeys, attic and basement; 2-window range. Rusticated pilaster strips to a moulded parapet coping. A left-hand doorway has a timber canopy on flat brackets, architrave with an over-light containing a fanlight, and a C19 four-panel door. Keyed brick flat arches, one on the ground-floor, to 6/6-pane sashes; hipped dormer.
INTERIOR: entrance stair hall with a dogleg winder stair with turned balusters, uncut string and a ramped, moulded rail, the stair dividing at the half-landing with a short flight to the rear service block; fully-panelled ground-floor rooms, the rear one with an eared fire surround with niches each side; panelled shutters and 4-panel doors. Brick tunnel vaulted cellars.
SUBSIDIARY FEATURES: attached wrought-iron front area railings with finials. Laid out by the Corporation as a terrace with Nos 10-13, though built by separate developers, and forming a group with the rest of Orchard and Unity Streets.
(Gomme A, Jenner M and Little B: Bristol, An Architectural History: Bristol: 1979-: 101; Mowl T: To Build the Second City: Bristol: 1991-: 15).