Former Pro-Cathedral of the Holy Apostles 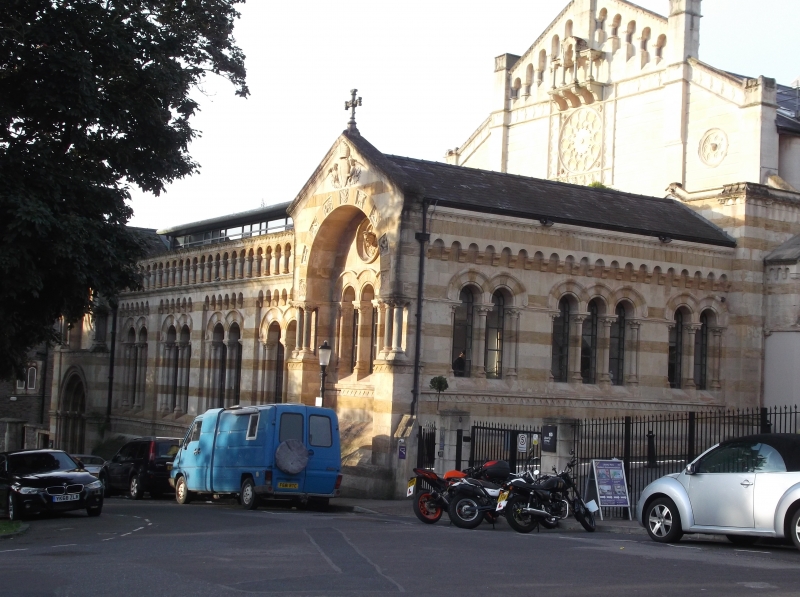 Former Roman Catholic pro-cathedral, later a school. c1834. By HH
Goodridge for Bishop Baines. Work stopped 1845, interior and
roof by C Hansom 1848, partly refaced and extended 1870-76 by
Hansom. Bath stone ashlar; 1870 extension Pennant rubble;
slate roof.
Greek Revival-style 1834 work, Northern Italian Gothic
Revival-style for 1870 alterations and school. Arcaded nave,
transept, and school room across the W end. The 1834 work
consists of a 6-bay N elevation articulated by column shafts
with entasis to overhanging eaves, with banded walls between,
pierced by c1870 semicircular-arched windows, and a
flat-headed window to the transept with architrave and console
sill blocks. Similar S elevation, with a basement with windows
with pilaster jambs to recessed lintels and a rendered C20
range above, and 3 doorways to the transept with architraves;
E end obscured by ivy and the Bishop's Palace (qv).
The c1870 W end has a single storey 6-bay elevation, with
raised gables set forward at each end containing semicircular
arches on paired Pennant columns and alternate voussoirs
carved with Zodiacal symbols, beneath cartouches held by
angels.
The left-hand gable has a deeply-set 8-light wheel window with
trefoil heads in a moulded architrave, above a
semicircular-arched doorway with 3 orders to stiff leaf
capitals and a panelled door; the right-hand gable has a
weathered sill to 3 deeply-set semicircular-arched windows
with a round panel above containing a Tudor head. The centre
has a weathered sill band, chevron band above and machicolated
frieze to the parapet, with paired semicircular-arched windows
separated by pilaster strips.
The right-hand return has 2:3:2 windows as the front, with a
right-hand gable, as the front, supported by C20 props, with a
tympanum carved with New Testament scene, and darker limestone
alternate voussoirs to the arch. The nave gable has a raised
central section, divided by plain square buttresses, with a
panelled band across and down the raking aisles, a central
blind round window above with 12 round panels and panelled
bands to the sides and beneath, and brackets above supporting
a tripartite balcony with a central arch; the gable has a
parapet with blind semicircular arches on thick columns.
INTERIOR: 9-bay nave with timber posts to semicircular arches
between and across the aisles and nave, and a clerestory
arcade along the nave, Gothic ashlar reredos to raised
chancel; narthex has central tripartite arches with round
columns with crocket capitals and carved relief frieze, with 3
blind arches each side, and a tiled floor; the school has a
flight of steps up from the entrance, to a gallery above the
full-width hall; brick vaulted crypt.
HISTORICAL NOTE: the original design envisaged a large
Classical temple overlooking the city, with pedimented ends
and Corinthian columns. The foundations were laid in 1834, but
work stopped and bankruptcy ensued after they shifted in 1845.
To the half-finished columns, Hansom constructed a
light-weight timber church, 'on shipbuilding principles'
(Crick). The 1870 design for its completion, also by Hansom,
included the Lombardic re-working of the W end along the sides
to the transepts, and building a SW campanile in the same
manner. The building across the W end was intended as a school
room, and the Gothic Revival house at the E end for a Bishop's
Palace (qv).
(Crick C: Victorian Buildings in Bristol: Bristol: 1975-: 6,
32; Gomme A, Jenner M and Little B: Bristol, An Architectural
History: Bristol: 1979-: 243).