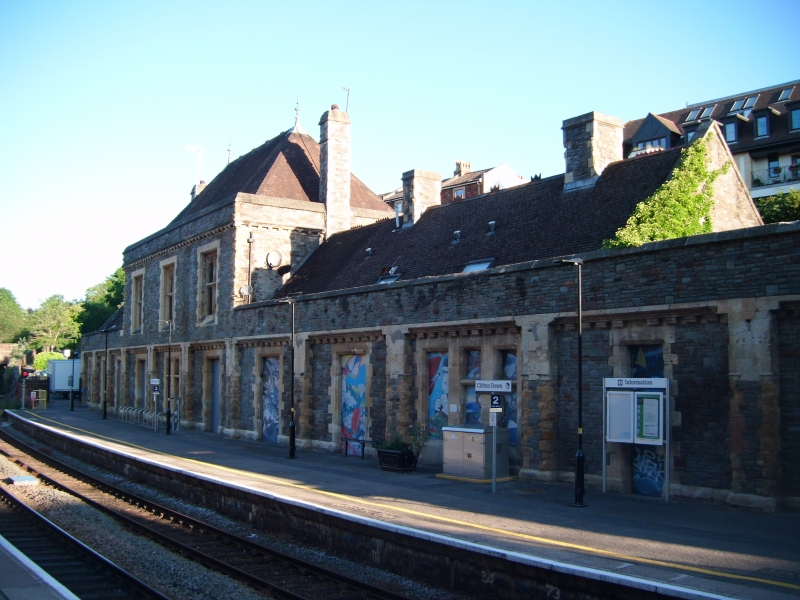 Church of England Parish: Clifton All Saints with St John

Railway station, now station and public house. Opened 1874,
converted 1970s. Squared Pennant rubble with limestone
dressings, lateral and ridge stacks and a tiled hipped roof.
Single-depth plan. Tudor Gothic Revival style.
2 storeys; 3-window range, with single-storey side blocks
either side.
Central booking office has rock-faced quoins, impost band and
sill band; corbel table below a weathered parapet; three
2-centre arches have splayed reveals and C20 glazing and door,
and large second-floor cross windows with trefoil arches in
flat heads. The roof has lead finials. End-gabled block each
end have 5 single and paired flat-headed windows with glazing
bars, the E block has a parapeted end section, the W block has
a rounded corner beneath a moulded, corbelled corner. The rear
elevation is articulated into rectangular recessed bays with
corbel tables, with blocked openings to the backs of the
station blocks. INTERIOR: converted to a public house.
SUBSIDIARY FEATURES: screen wall, articulated into bays as the
station buildings, extends from the station to the Whiteladies
Road bridge (not included). Built as the terminus of the
Clifton Extension Railway, it became a through station with
the opening of the Clifton Down tunnel in 1885. Formerly with
good glazed canopies on cast-iron posts, which extended on
both sides supported by the screen walls (qv).
(Oakely M: Bristol Suburban: Temple Meads, Local Stations etc:
Bristol: 1990-: 42).