A Grade I Listed Building in Cubley, Derbyshire 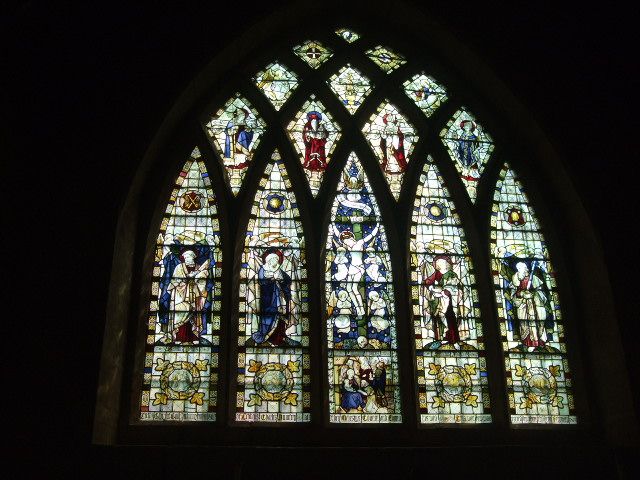 Three-stage western, late C15 ashlar tower has deep plinth with moulded copings and full-height stepped angle buttresses to all corners. West elevation has elaborately moulded, pointed doorcase with hoodmould and carved spandrels with dagger-like cusped panels surrounding central coats of arms. Above, a moulded string course and a large, deeply recessed 3-light transomed Perp window with hoodmould. To north and south sides of tower at this level are friezes of the Montgomery coat of arms. Also to the south elevation are thin staircase windows. Above to west, is a C19 clock face and to north and south are deeply recessed quatrefoil windows. Above again is a continuous string course and the third stage with cusped Y-tracery, louvred bell openings with hoodmoulds to all sides, that to south displaced to east by staircase. Embattled parapets with ridgeback copings and corner crocketed pinnacles, over. North nave elevation has rubble stonework with
herringbone patterns to base and coursed squared sandstone above. Two C17 large 2-light recessed and chamfered mullioned and transomed windows with leaded lights flank a large stepped buttress. To east, chancel of coursed squared sandstone with crude plinth and two stepped buttresses with two thin chamfered C13 lancets between on north wall. East window is a squat 5-light intersecting tracery window with corner buttresses to either side. South chancel wall has three chamfered lancets, that to east C19, the others C13. Between western two is a C13 pointed doorcase with hoodmould. To west the south ave aisle has C17 2-light recessed and chamfered mullioned and transomed east window and two similar windows to south with stepped buttresses to either end. Above is a moulded string course and low parapets with ridgeback copings. To west stands south porch with circular mouchette-traceried side windows and a cusped ogee headed doorcase. Inner doorcase is C13 with plain pointed arch, moulded imposts, chamfered jambs, and hoodmould.

Several fine monuments, in the chancel is an alabaster tomb chest to Sir Nicholas Montgomery, who died 1494, with the figure of an armoured knight with his feet on a lion to the top, and angels. holding shields to the sides. Also, on the south wall of the chancel, is another alabaster tomb chest, set in a moulded four-centred arched niche with crocketed pinnacles to the sides. The effigy has been lost but the sides
have finely carved weepers under double ogee arches with crocketed tops. This tomb has been ascribed to Harper and Moorecook of Burton, c1500. A similar niche, without a tomb,is placed against the south wall of the south aisle. Also in the south east corner of the chancel is a very worn stone slab carved with the figure of a woman, placed on the floor, probably late C15.

Fragments of medieval glass survived in most of the chancel windows, except for the east window which has stained glass, of 1874. Fragments of painted decoration also survive over the chancel arch and the east arch of the nave arcade. A C12 circular font stands in the nave aisle and there are two C19 commandment plaques on the nave north wall.

This List entry has been amended to add the source for War Memorials Register. This source was not used in the compilation of this List entry but is added here as a guide for further reading, 25 January 2017.