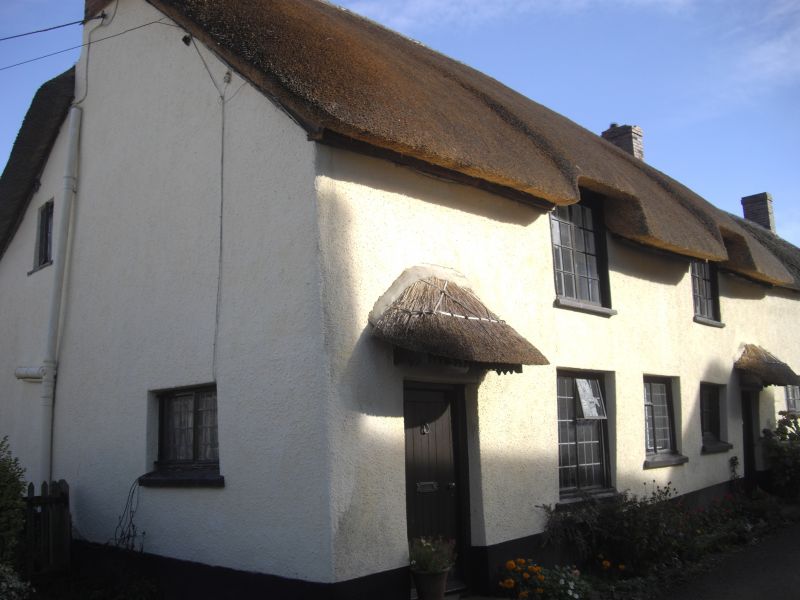 5/39 Hutchings and Ponderosa
22.2.55 (formerly listed as cottages adja-
cent to Newcott on West side).

2 adjoining estate cottages, probably originally one house. C17 or earlier origins
with later alterations. Creamwashed and rendered, probably cob on stone footings;
thatched roof with plain ridge, gabled at left end, hipped at right end; left end
stack, axial stack to rear wing, both with brick shafts.
Plan: L plan, a single depth main range probably 2 rooms wide, one room to Hutchings
to the left with a rear right wing at right angles to Ponderosa. The evolution of
the plan was not clear on survey (1987) as interior of Hutchings only inspected but a
C17 window frame on the ground floor of Ponderosa indicates origins of at least that
date and it is possible that the building is earlier.
Exterior: 2 storeys. Asymmetrical 3 window front, the eaves thatch eyebrowed over 2
first floor windows. C19 or C20 plank front doors to left and right, each with a
thatched porch hood. C17 2-light window with a chamfered timber frame to the left of
the front door to Ponderosa, 2 other ground floor windows, both 2-light C20 casements
with square leaded panes. 2 first floor C19 or C20 small pane timber casements. The
right return of Ponderosa has one first floor 3-light C20 casement with square leaded
panes and two 2-light ground floor casements. A C19 cast iron pump, the handle
missing, is sited in a small rough-cobbled yard to the left (west) of Hutchings and
is included in the listing.
Interior: Hutchings only inspected. The front room has exposed carpentry, probably
C20 replacement, and an open fireplace with a plain timber lintel and a bread oven.
Roof: Not inspected but may be of interest and early roof timbers may survive. An
interior inspection of Ponderosa might necessitae revisting the suggested dating.
In an outstanding village characterized by cob and thatch.