A Grade I Listed Building in Fortuneswell, Dorset 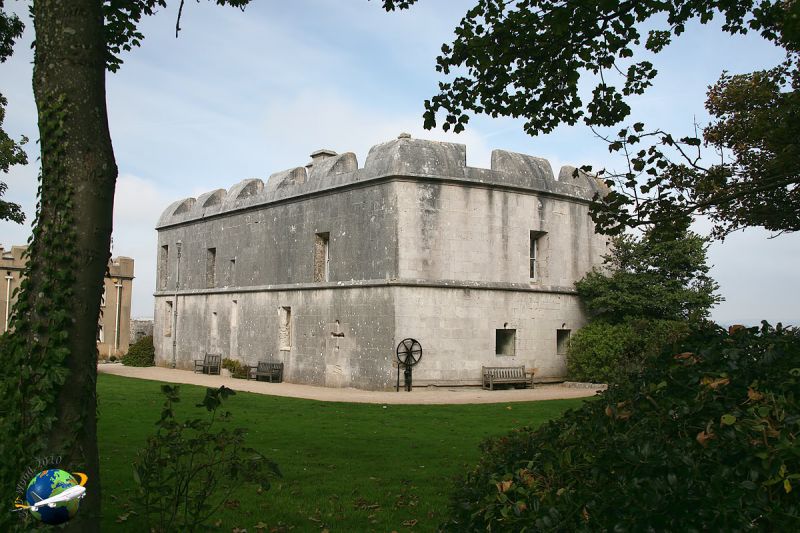 Coastal fortification. c 1540, one of Henry VIII's castles.
Total cost »4964-19-10d. Portland ashlar, lead and slate roof.
Circular keep enclosing octagonal hall, flanked by wings at an
obtuse angle, and enclosing a gun platform at upper level,
contained in a segmental wall to seaward. A short cranked
passageway gives access to the octagonal hall from the W side;
on each side of the hall a large rectangular room at each
level, that at ground floor to the SE being the former
kitchen. The straignt enclosing walls have various rectangular
openings to splayed jambs, with a continuous weathered string
at mid height, and a further string immediately below the bold
segmental parapet with wide splayed gun ports. This detail is
carried round the upper level of the roofed quarters. The
seaward segment is set on a wide splayed glacis, and has 5
segmental-headed deep double-splayed gun ports, below the
weathered string at the segmental parapet with 4 gun ports.
The gun platform, behind the parapet with its walkway, is in
stone flags. Interior: the ground floor has stone flags, and
the upper floor is boarded, carried on heavy floor joists and
beams, some of these original. Walls are ashlar, unpainted.
The octagonal hall is sub- divided at each level by timber and
plaster partitions. The kitchen, to the right, has very deep
splayed openings, to former gun-loops, with flat
straight-sided inner arches. The great thickness of walls is
shown by the dept of reveals to all openings. Various arched
fireplaces; stone stairs with flat-slab stone ceilings.
Portland Castle was one of a pair with Sandsfoot Castle in
Weymouth, across the harbour and c 3km to the N. Portland
originally had a defensive moat. In 1623 it had 13 guns, but
by the time of the Civil War there were 21 guns. The Castle
was held by the Royalists, but yielded in 1646. From 1816 it
was occupied by the Manning family, and the adjacent Captain's
House (qv) was built. In 1870 it reverted to the Crown, and in
1984 became an English Heritage Property in Care.
(Royal Commission on Historical Monuments: Dorset: London:
1970-: 251-2; Buildings of England: Pevsner N and Newman J:
Dorset: London: 1972-1989: 340-1).