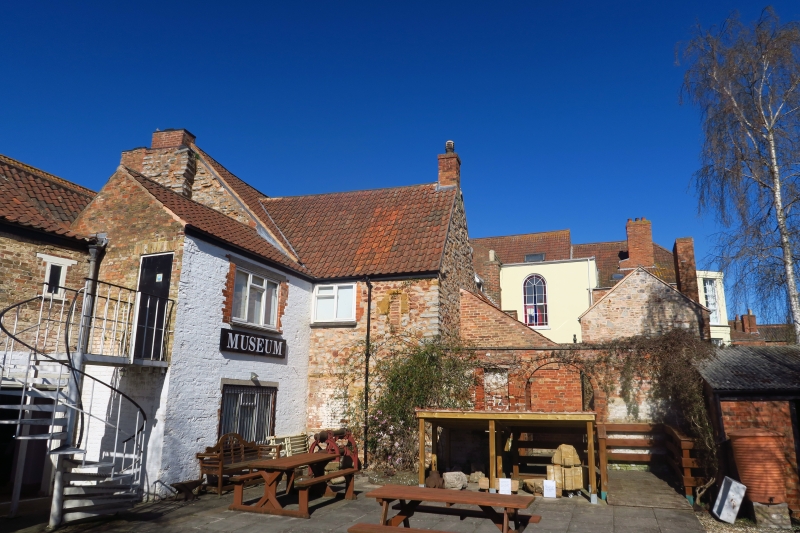 House, now a museum. Late C15/early C16, remodelled early C17
and refronted C19. Limestone rubble with some C18 irregular
English-bond brick to the right and Ham Hill stone, painted
rough-cast to the first floor, pantile roof with stone stacks
to gable ends and brick stacks to rear.
PLAN: 2 bays flanked by 2 half bays through-passage plan,
possibly L-shaped, now double-depth plan.
2 storeys; 3-window range. At eaves level the first floor has
late C19 two-light casement windows with Tudor arches to each
light and some C20 timber-framing to the left. Similar
full-height late C19 windows with C20 timber lintels and C19
brick jambs flank late C19 four-panel double doors with
Tudor-arched panels to the top. A similar smaller window to
the far right. Set into the wall to either side of window to
left are moulded Ham Hill stone jambs and the corners of
smoothed-off label moulds to former stone-mullioned windows. A
stone jamb to a former door to the left of the present door
and a blocked door with timber lintel to right.
The rear right wing is of red Wembdon Hill rubblestone and
blue lias limestone rubble; it has a C19 outshut, mostly
brick, with a pantile roof to the rear; the right return has a
slit window with Ham Hill stone quoins to the first floor and
top of a 2-light stone mullioned window. The late C18/early
C19 rear left wing is of Flemish-bond brick with a roof
parallel to the front; it has semi-elliptical brick arches
over C20 two-light casement windows; a lean-to with 2-light
glazing-bar casements and a half-glazed door with
stained-glass margin panes.
INTERIOR: the room to the ground-floor left has
hollow-chamfered beams to a 6-panel ceiling with early C17
plaster moulding to the edge and a roundel to the centre of
each panel. The hall is stone-flagged with C19 wainscoting in
C17 style, below a dado rail and two 2-panel doors with
raised-and-fielded panels to the right; an early C19 staircase
with stick balusters, swept rail and turned newels to the rear
left with C19 wainscoting.
The former through-passage, now part of the room to right of
the door, has a heavy unmoulded beam to right; rest of room to
right has a hollow-chamfered quartered ceiling, a late
C15/early C16 open fire to right has a hollow-moulded shallow
Tudor-arched oak lintel on Ham Hill stone chamfered imposts
and moulded jambs. To left of it is a late C15/early C16
two-light stone-mullioned window with cinquefoil heads to each
light, looking onto a further room; to right is a C20 doorway
with steps down to that room, a former C19 cottage, now an
exhibition room.
A room to the rear right has a 2-light timber window frame
with a chamfered stone lintel, a diagonally-set vertical iron
bar to each light and some thinner horizontal bars, it is
bricked up on the outside.
The first floor is 6 bays with arch-braced trusses; exposed
timber cross-wall frame with tension braces to the left and
front corner. The right-hand wall has a Ham Hill stone
shallow-pointed lintel and jambs to a open fireplace to right
of centre. The first-floor room to the right has 2 exposed
panels with C17 graffiti including a ship, a man on horseback,
shoes and a spinning wheel.
History: Admiral Robert Blake, 1599-1657 was born and lived in
this house. A scholar at Wadham College Oxford, on the death
of his father he gave up his literary career to see to the
education and settlement of his 13 brothers and sisters.
Concerned in politics of Church and State, he became Member of
Parliament for Bridgwater in the Short Parliament dissolved by
Charles I and for Taunton in 1645. A supporter of the
parliamentary cause, he distinguished himself in the sieges of
Bodmin, Lansdown, Bristol and Taunton. In 1649, at the age of
50, he took up his first command of a ship and until his death
was regarded with an enthusiasm bordering on idolatry; even
those against whom he fought considered him as a knightly foe.
The body of the hero was embalmed and placed in a new vault in
Henry VII's Chapel in Westminster Abbey. In 1660 Charles II
ordered the body to be removed and thrown into a pit.
The house was described in 1889 as "an old and interesting
structure, two stories high, built of blue lias stone, with
walls of immense thickness, heavy stone stairs, oak wainscots
and decorated ceilings; altogether a habitation of Tudor
origin, and of unmistakable importance in those times."
(Harmam S J: History of Bridgwater).