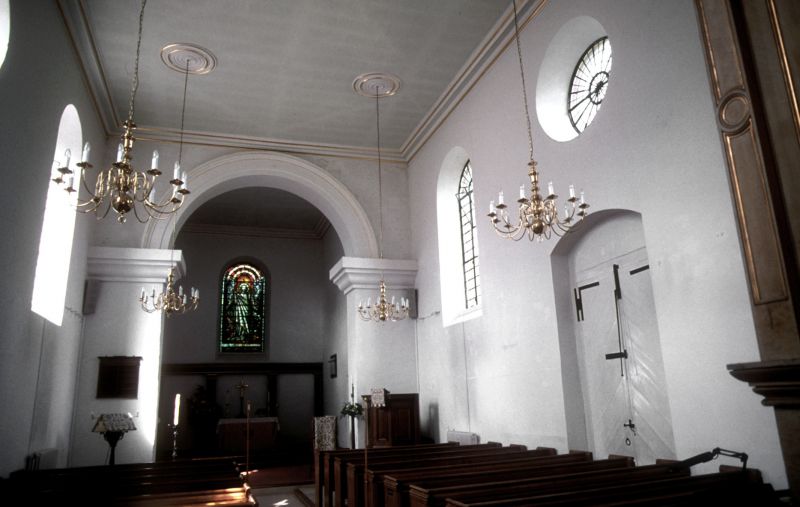 Parish church. 1734. For Robert, eighth Lord Petre. Red brick
in Flemish bond with some stone dressings, roofed with
handmade red clay tiles. In the style of Hawksmoor. Chancel
and nave aligned almost N-S, with vestries to each side of
chancel, and S tower, but described here by conventional
cardinal points.
The chancel is narrower than the nave. It has an E window with
a semicircular arch, and glass by Edward Frampton, 1894. The N
and S walls each have one round window. Raised band below the
windows. Eaves cornice with large dentils and mouldings,
hipped roof of shallow pitch. Paintings on E, N and S walls of
chancel by Reginald Hallward, 1894, covered by white paint.
Moulded plaster ceiling cornice. Moulded semicircular
chancel-arch with extended imposts. The nave has in each of
the N and S walls 2 casements with semicircular arches and one
round casement, all with original wooden frames. Original N
and S double doors, each of 8 panels with ovolo mouldings, in
semicircular arches. Raised band below windows. Cornice
similar to that of chancel, but roof gabled and of higher
pitch.
INTERIOR: plain apart from a moulded ceiling cornice. Each
vestry has an E window with semicircular arch, and a W doorway
with boarded frame and segmental arch; original 6-panel door
in N vestry, C20 replica in S vestry. Moulded eaves cornices
and hipped roofs. The W tower is plain, with a semi-octagonal
turret at each side, rising above the parapet as octagonal.
Original W double doors, each leaf of 8 fielded panels, in a
semicircular arch with projecting keystone, the wooden
tympanum having radial slots. Raised bands at impost and
keystone levels. Plain casement above doors, with flat arch of
gauged brick. In the bell-stage is a louvred aperture to E and
W with semicircular arch. Arched corbel table on 4 sides of
tower. Each turret has 3 plain loops. The church was built in
1734, consecrated 1736, to replace 2 medieval parish churches
closed by Act of Parliament, St Nicholas', Ingrave, one km to
the N, and St Nicholas', West Horndon, 2.5 km to the S from
which some fittings were transferred.
FITTINGS AND MEMORIALS: font, octagonal bowl with quatrefoiled
panels and moulded rim and base, early C16. Pulpit, oak,
octagonal, c1735. In the chancel are brasses (1) of Margaret
Wake, 1466, figure of woman in kirtle, mantle and butterfly
head-dress, with incomplete marginal inscription plates and 4
shields of arms, (2) of Sir Richard Fitz-Lewes, 1528, figure
of man in plate armour with tabard of arms, head on crested
helm, feet on dog, and figures of 4 wives in fur-trimmed gowns
and pedimental head-dresses, indents of 2 groups of children
(all illustrated in RCHM). The organ, 1856, was removed from
the chapel of Thorndon Hall (qv). In the chancel are
floor-slabs (1) of Grace, wife of Reverend John Newman, 1795,
and John Newman, 1802, (2) of Elizabeth Banks, 1787, Elizabeth
Newman, 1788, Robert Newman, 1792, and Joseph Newman, 1802,
(3) of Joseph Collborne, 1795, and Hester, his widow, 1831,
(4) of Rev. Owen Jones, and Anne Jones, 1772, (5) of Mary Ann
Marston, 1795, and Ann, wife of Charles Marston, 1795, and
Charles Marston, 1806, and (6) of Henrietta Walmesley, 1767.
In the nave are floor-slabs (1) of John Tempest, 1736, (2) of
John Tempest, 1757, (3) of Reverend Charles Lucas, 1787, (4)
of Luke Davy, 1799, (5) of Peter Denoir, 1799. Inset under
glass near the NW corner of the nave is a portion of a
black-letter inscription to Walter Gayslee, C14. On the N wall
of the chancel is a tablet to Reverend Thomas Newman, 1807,
and his widow Margaret, 1819, and on the S wall a tablet to
Thomas and Elizabeth Newman, 1842. There are 6 bells, of which
the first, second, third and fifth, are by Thomas Gardiner,
the second dated 1737, the fifth dated 1735, the others
probably of similar dates.