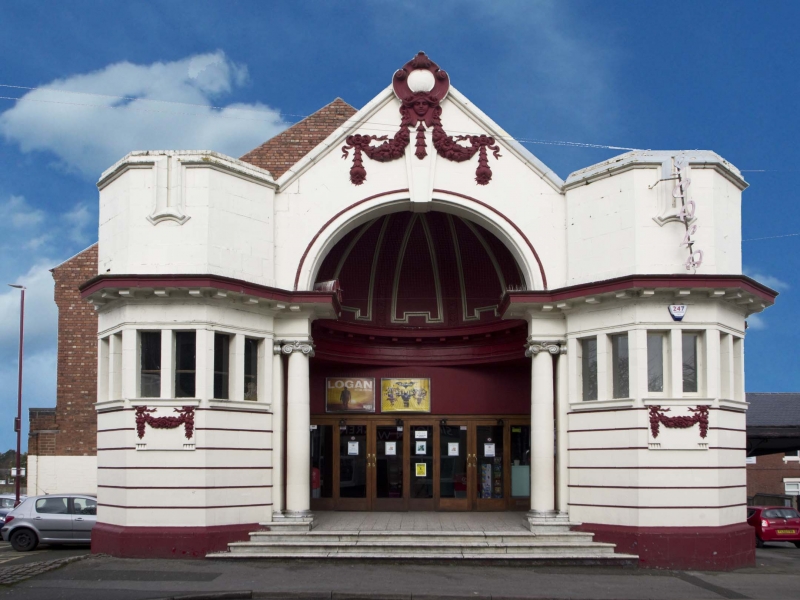 Cinema. 1913 by John Parsons and Sons of Bulwell. Constructed by Pegg and Bailey of Derby. Stock brick, the front block painted terracotta by Hathern. Welsh slate roof, single boiler chimney to west. Tall, rectangular hall with short gallery has small ancillary structures to west (originally shielded by buildings) and projecting foyer area to front. Frontispiece in Edwardian Classical style, utilitarian brick range behind. The frontispiece is a tripartite composition of gabled centre bay, flanked by canted bays. Banded rustication. The centre bay is filled by a large semi-circular headed arch, supported on Ionic columns the entablature and dentil cornice of which continue across the canted bays and along the return walls. The arch has a stepped keystone with swag and cartouche of a female figure in the apex of the gable. The canted bays have two-light square section mullion windows to each face and on the main face, beneath the sill, a panel with a swag. Tall attic/parapet with moulded stringcourse. Within the entrance arch is a half domed semi-circular recessed porch. The entablature and cornice continue around and the half dome has panels of applied decoration. The body of the auditorium is of stock brick, without windows, and with the east and west elevations broken up by panels of recessed brickwork. East side with full length timber queuing canopy on wrought-iron brackets. At northern end, exit door in painted stone surround. Projecting sound box to rear indicative that this was originally a silent cinema without a stage area on which to mount the c.1930 speaker equipment (ie. that it was never a cine-variety hall). Interior. Panelled foyer the full width of entrance with office in canted bay to right and dog-leg stairs with iron barley-sugar balustrade in canted bay to left. Central paybox probably late 1930s, contemporary with double entrance doors in similar wood veneer with chrome handles. Auditorium of seven bays with one-and-a-half bay balcony at rear. Original proscenium with pediment now set behind later free-standing screen. Barrel-vaulted ceiling with circular ventilation grilles and crossed by ribs with moulded fruit decoration. These continue on side walls as pilasters with Ionic capitals embellished with cherub heads. Between them plasterwork treated as panels, all with continuous heavy modillion cornice over. Gallery front elaborately treated with flowing cartouche mouldings. Gas secondary lighting survives at rear of hall. Original seating to front two-thirds of stalls.