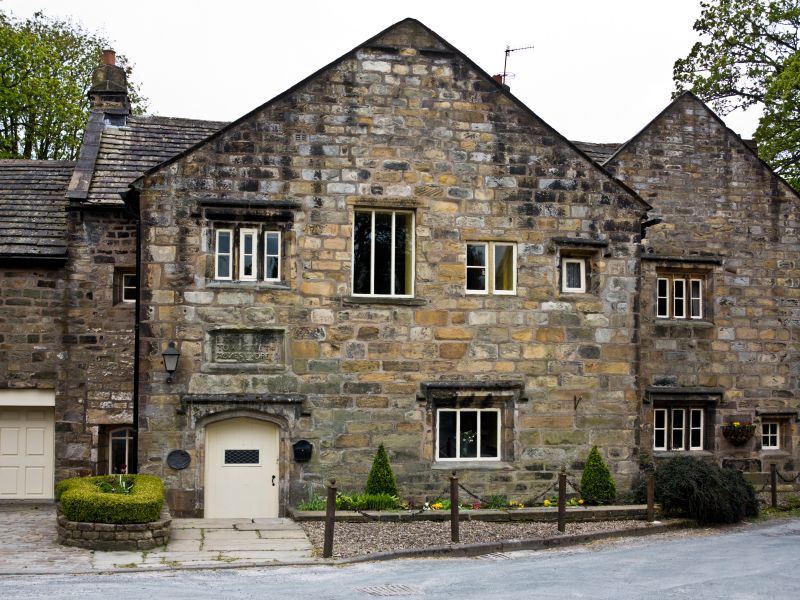 Lesser-gentry hall-house, subsequently farmhouse, now house. Dated 1579
over doorway on north side; altered. Coursed squared sandstone (without
quoins), stone slate roof on 2 levels. L-shaped plan, facing south: hall
range with short rear wing, projecting crosswing at west end, axial wing at
east end. Two storeys; south front of dressed masonry has recessed
mullioned windows all with round-headed lights and hollow spandrels, and
mostly with king-mullions; at the right hand end of the hall range a gabled
2-storey porch with moulded 4-centred arched outer and inner doorways,
slightly-oversailing upper floor with a 2-light window under a hoodmould,
and a straight ledge above this (probably associated with former
pigeon-holes in gable); to the left of the porch long windows of 3 + 3 + 3
and 2 lights at ground floor and 3 + 3 + 3 + 2 lights above, both with
continuous dripmoulds and the upper of these carried round the re-entrant
wall of the wing, which has a 2-light window and a small single-light
window at this level. The gable of the west wing has a 3 + 3 light window
with a hoodmuld on each floor; its return wall has an external chimney
stack to the front bay, with offsets, a corbelled chimney at 1st floor of
the rear bay, between these a square-headed 2-light mullioned windows with
hoodmould on each floor (upper altered as sash), a little chamfered window
beside the front stack at 1st floor, and some other inserted or altered
openings. East wing, of 2 lower storeys, set back slightly, has windows of
4 and 2 lights at ground floor, 4 lights at 1st floor, matching the others
at the front but without hoodmoulds. Rear is dominated by the wide central
gable of the short wing to the hall, which has near the left (east) corner
a moulded 4-centred arched doorway to an internal porch, with a hoodmould,
above this a rectangular datestone with moulded surround, lettered in
reflief BARNARDUS, and at 1st floor a recessed 3-light mullioned window
TOWNLEY ET
AGNES VXOS EIVS
1579
with hoodmould; the rest of this gable wall has a similar 3-light window at
ground floor (lacking mullions) a single-light window at 1st floor, 2
inserted stairlights, and an interrupted ledge in the apex of the gable (as
for stone cap of firehood), re-entrant of this wing, and gable of west
wing, have some other recessed mullion windows. Rear of east wing altered
as garage. Chimney on ridge, another on each east gable. Interior:
altered but surviving features include some muntin-and-rail panelling in
hall, moulded fireplace in parlour of wing and another in chamber above,
corbelled-head fireplace in chamber over, hall and another in the east wing
behind it. Reference: RCHM pp.172-3 et passim.