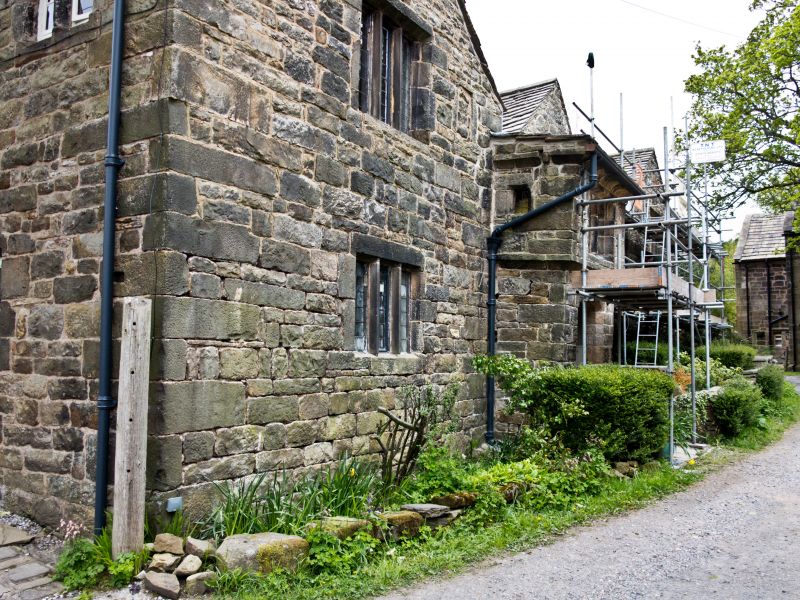 Farmhouse, now house. Probably mid-C16, altered. Large sandstone blocks
brought to courses, with quoins, stone slate roof. H-plan facing south:
hall with 2-bay crosswings. Now all 2 storeys, but formerly with central
open hall; at left end of hall a low 2-storey porch under carried-down roof
of shallow pitch, with wide chamfered outer doorway, a 3-light window above
with round-headed lights and hollow spandrels, chamfered inner doorway, and
in right hand wall a small arched doorway and a small window above (both
blocked, visible internally); hall has two slightly-recessed windows of 3
round-headed lights with hollow spandrels, and above there a large gable
with a window to light the inserted upper floor (3 lights with chamfered
flush mullions); gable of west wing has an altered 3-light window on each
floor; gable of east wing has a 3-light window on each floor, the lower
with chamfered flush mullions and the upper with round-headed lights like
those in the hall. A ridge chimney on each wing. Rear of hall has a gable
in line with that in front, with an apex chimney, various altered openings,
and large added outshut, overlapping left wing and hall, with catslide roof
and tall chimney at the rear. Left return wall of west wing has a 2-light
mullioned window with lintel inscribed "DAIRY". Interior: coupled
triangular-headed chamfered doorways into west wing; in front bay of this
wing a large rectangular fireplace with moulded surround, compartmented
ceiling formed by 4 major and 4 minor beams, all chamfered; stone flagged
ceiling to rear bay of this wing (and vaulted cellar below); separated
triangular-headed chamfered doorways from hall into east wing; early C17
inserted partition wall at lower end of hall, with chamfered
segmental-headed doorway; some early C17 moulded plaster decoration in hall
including original surround to head of this door, and between the beams at
the opposite end a foliated pattern with little winged figures in the
corners; king post roof trusses with angle struts, and arch-braced open
trusses in wings. Reference RCHM pp. 174-5 et passim,