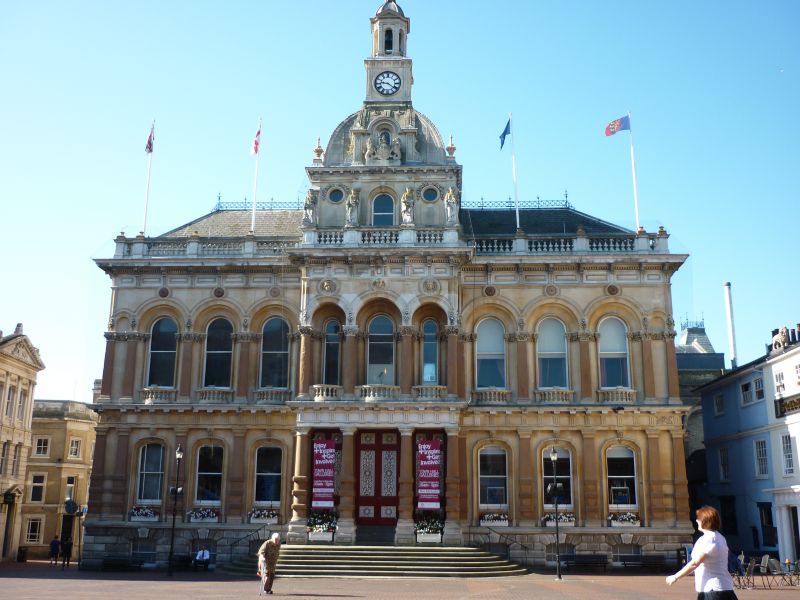 2.
A yellow stone building with pink pilasters, columns and dressings and
a balustraded parapet with a bracketted and dentilled cornice. Built
in 1867-68 by Bellamy and Hardy of Lincoln, it is a good example of high
Victorian civic architecture. 2 storeys and a sub-basement which becomes
a lower ground storey on Princes Street. The centre part, of 3 window
range breaks forward with an arcade of Corinthian columns on the 1st storey
and a Roman Doric Collonade with vermiculated rustications on the ground
storey. The portico is approached by a flight of stone steps. The balustraded
parapet has 4 female standing figures. Behind the parapet the centre
part rises to an attic storey with a modillioned cornice, a central window
and flanking bulls-eye windows. A stone dome, above, is surmounted by
stone clock tower and cupola. 9 window range on front (arranged 3:3:3),
and 6 window range on Princes Street, double-hung sashes without glazing
bars. The 1st storey windows have semi-circular arches with Corinthian
pilasters, coved splays, segmental balustraded balconies and roundels
above the arches (the roundels in the centre part have heads). the ground
storey windows have Baroque architraves and are set between Roman Doric
pilasters with vermiculated rustications. A modillion cornice runs between
the storeys, The sub-basement forms a rusciated plinth to the building.
Roof slate, hipped. The building was cleaned in 1971.

Also The Town Hall forms a group with The Corn Exchange, King Street.