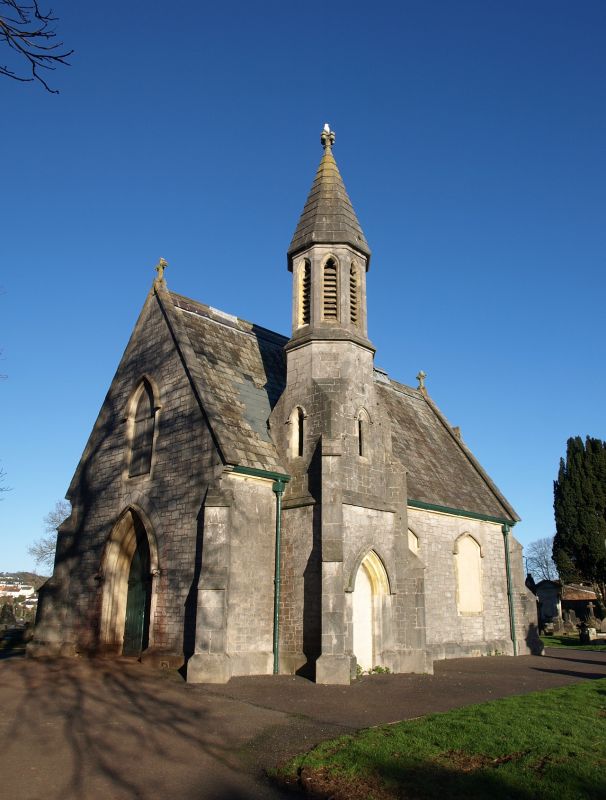 Anglican cemetery chapel, disused and semi-derelict at time of
survey. c1852, probably contemporary with the establishment of
the cemetery. Snecked local grey limestone with Bathstone
dressings; slate roof. Decorated style.
PLAN: Simple aisleless plan: 3 bays. On a
south-west/north-east axis. South-west end (ritual west) has
doorway; porch on ritual south side in western bay; slender
engaged bell tower in (ritual) western bay on north side.
EXTERIOR: Diagonal buttresses with set-offs; coped gables.
Ritual west end has a 3-centred moulded doorway with a
hoodmould; original plank door with elaborate strap hinges.
3-centred arched window above has a hoodmould, probably
2-light but boarded up at time of survey. West end has a
larger boarded-up window with a hoodmould, set in a
round-headed panel of masonry. Small gabled porch on south
side with a double-chamfered arched doorway and remains of
original boarded door with elaborate strap hinges. The 2
eastern bays have crank-headed blocked windows with
hoodmoulds. North side similar but with 3-stage tower in the
western bay with diagonal buttresses. Moulded arched doorway
on north face. Second stage has one-light trefoil-headed
windows with hoodmoulds and splays, up to the octagonal belfry
stage which has tall trefoil-headed louvred belfry openings
and a pyramidal stone slate roof with a crocketed finial.
INTERIOR: Not inspected.
HISTORY: 17-acre site established by the Torquay Extra-Mural
Cemetery Company (Brooks). Included for group value.
(Brooks Chris (ed.): Mortal Remains: 1989-: P.176).