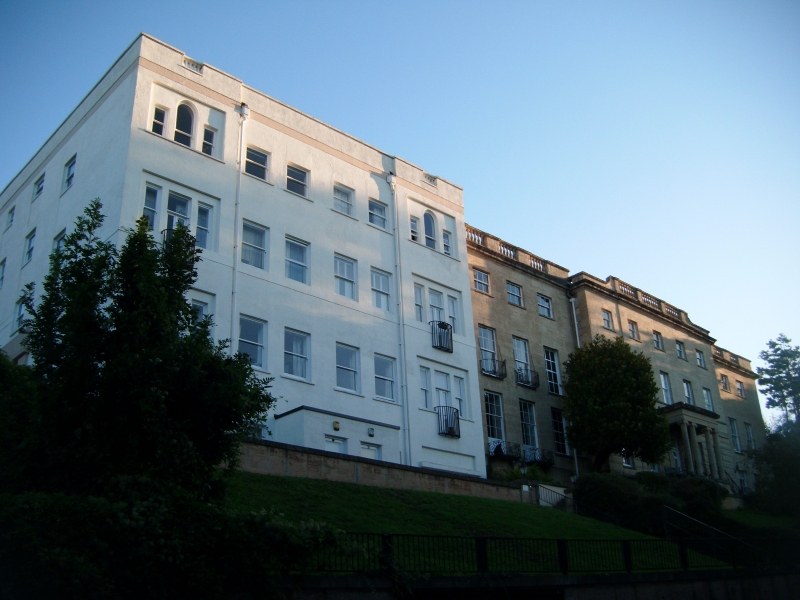 House, now flats. c1794, extended c1820. Limestone ashlar and
stucco, roof not visible. Double-depth plan. Mid Georgian
style. 3 storeys and basement; 11-window range.
A symmetrical front has central C18 five-window block with the
middle 3 windows broken forward, and 3-window C19 wings set
back each side. The piano nobile ground floor has bowed
rustication to a plat band, first-floor sill band, cornice,
and parapet ramped up over the centre and with balustrades
over the windows.
A large C19 raised porch has a rusticated basement with 3
semicircular-arched openings, separated by niches below paired
Ionic columns to an entablature; flights of steps each side
with Pennant dressings have cast-iron railings with diagonal
bars. Pennant stair flight to the right-hand wing with
wrought-iron railings. Semicircular-arched basement windows;
6/6-pane sashes, 3/3-panes to the second storey.
The stucco rear elevation has 1:3:1 C18 middle with quoins and
inner pilasters, plat band, first-floor sill band, and
cornice, doorway with a console cornice, rectangular fanlight
and 6-panel door; windows with architraves, keyed to the
centre, to 6/6-pane and 3/3-pane sashes. Projecting ashlar
outer blocks have inner semicircular-arched doorways, and
ground-floor windows set in elliptical-arched recesses linked
by an impost band.
INTERIOR: much altered; rear stair hall with a good mid C18
open-well stair with column-on-vase balusters with twisted
vases, 3 per tread, and a moulded ramped rail to a wide
curtail, second-floor stair with column balusters, and a
modillion cornice.
(Gomme A, Jenner M and Little B: Bristol, An Architectural
History: Bristol: 1979-: 263).