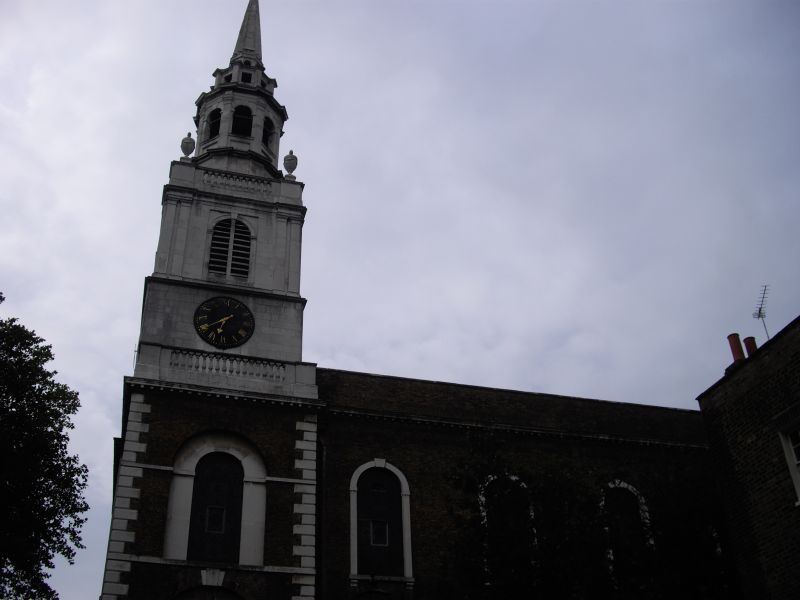 Anglican church. 1788-92 by James Carr; steeple rebuilt 1849;
restored by Reginald Blomfield 1882. Multi-coloured brick set
in Flemish bond with Portland stone dressings, roof of Welsh
slate. Chancel, nave, porch and vestibules under a single
roof, tower and spire over the pedimented west gable. The east
end has crypt windows and two levels above, all with plain
stone architraves, the crypt and lower level segmental-arched,
the upper level round-arched; central east window round-arched
with gauged brick head and inset Palladian motif; shallow
segmental-arched window to pedimented gable. The south side
has slightly projecting outer bays with chamfered quoins and
balustrated parapet: each bay has a flat-arched entrance
flanked by Roman Doric columns carrying triglyph frieze,
mutule cornice and pediment, that to the east blocked, that to
the west with panelled door of original design; the entrance
as a whole recessed under a round arch of gauged brick with
double keystone; above each entrance a round-arched window
with broad plain stone surround, recessed under a round arch
of gauged brick; between the bays four windows to three levels
detailed as for the east end; a modillion cornice runs the
full length of the south side; parapet. The north side is
detailed like the east end but with no enrichment and
two-storey parish hall attached under a separate roof. The
west end has a centrepiece under the tower faced with Portland
stone, with brick wings to either side detailed as for east
end; central flat-arched entrance set back under a round arch
with Gibbs surround; round-arched window above set back twice
under round arches and once under a flat arch, with balustrade
and impost bands; round-arched niches to either side with
blank recessed panels above them; modillion cornice and
pediment. The tower is square in plan at the clock and bell
stages, the latter with round-arched louvred openings with
central mullion, imposts, archivolt and keystone; paired
pilasters at each corner; balustraded parapet with urns at
each corner, and then three octagonal stages, the first and
principal having an arcaded order; octagonal spire with ball
finial. Railings to steps to both south entrances with
wreathed handrail and columnar balusters.
INTERIOR: : the body of the church is a single space curved at
the west end. Reredos with pilasters and engaged columns,
triglyph frieze, mutule cornice and central pediment; the
panels of the reredos and two side wall panels painted with
texts in the C19 or early C20; panelled dado to side walls.
Gallery carried on Doric columns, stepped and curved at the
west end; upper galleries flanking the organ at the west end,
of 1822, carried on cast-iron columns with iron balconies.
Architrave and cornice with palmette and guilloche ornament.
Plasterwork decoration to the ceiling in the form of circular
and oval panels with bay leaf and Vitruvian scroll ornament.
Late C18 communion rail with wrought iron ornament; fine organ
with Spanish mahogany case, 1792 by George Pike England,
restored in 1978; east window by Heaton, Butler and Bayne,
1863; wall tablet to Elizabeth, Countess Dowager of Exeter, at
east end of south aisle, 1653. The porch rooms and vestibules
all have architraves, panelled doors and panelled dadoes;
staircase to main gallery has panelled dado, wreathed rail,
open string and metal stick balusters; the stairs to the upper
gallery have wreathed rail, open string and metal irontwist
balusters. There are important wall monuments from the earlier
church of St James in the porch: that to Thomas Crosse, c.1712
in the south porch is a plain tomb chest carrying paired
Corinthian pilasters with busts in front on scrolled consoles,
and between them an inscription panel; above that an armorial
cartouche with floral garlands set within a broken pediment;
that to Gilbert Burnet, also in the south porch, c.1715 by R.
Hartshorne, has pilasters flanking the panel with emblems of
learning under a broken and open pediment; in the north porch,
monument to Elizabeth Partridge of c.1702, cartouche with
bust, weeping putti and death's head. The church's C18
interior has survived in an unusually unaltered state. C19 and
C20 glass includes large Ascension East end (Heaton, Butler
and Bayne, 1863) and the Rose memorial window (North aisle,
1899, by Curtis, Ward and Hughes).
(Eric Willatts: Streets with a story. The book of Islington:
London: 1986-; Historians' file, English Heritage London
Division).