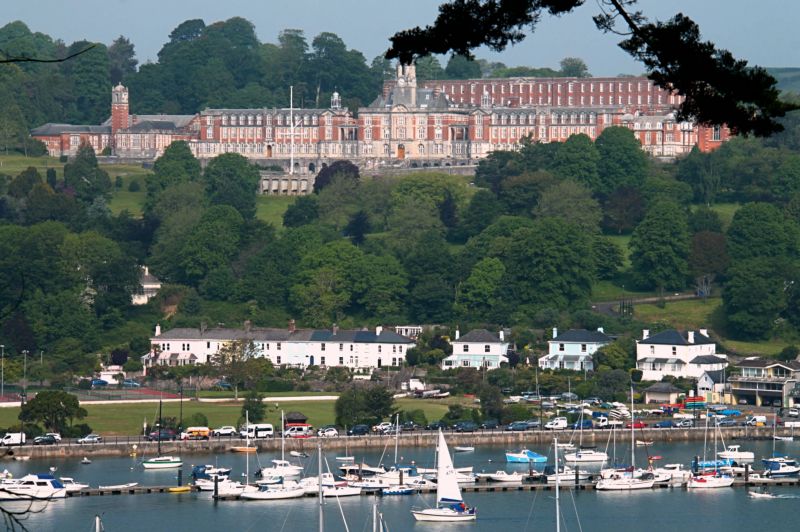 PLAN: central entrance block flanked by long wings which terminate in asymmetrical pavilions. The wings contain offices to the front, with an axial corridor behind giving access to the gun room in the south west pavilion (which also contains the ward room), and the Anglican chapel in the north east pavilion (which also contains the captain's house). A rear centre wing at right-angles contains the great hall, flanked by classrooms, accommodation and service blocks.The c1914 addition is built to the rear (north west). Parade ground in front of and below the main range has an imperial stair rising to the entrance block and is flanked by curving drives.

EXTERIOR: carved with appropriate Royal Naval motifs including lettering, crowns and projecting carvings of historic ships' prows of different dates. Three storeys, plus two tiers of attics to the entrance block. Thirty seven bay main range plus the pavilions, each associated with a tower, and symmetrical except for the pavilions. Five bay entrance block, flanked by three bay engaged porticos, then the thirteen bay wings. Ground floor stone with channelled rustication to the wings, vermiculated to the entrance block; stone mullioned windows with high transoms. Entrance block has deep hipped slate roof, balustraded parapet, stone-banded chimney shafts and stone bands at second floor sill level and below the parapet. Centre bay broken forward, outer bays flanked by pilasters. Centre bay with composite pilasters and half columns to the upper storeys with a tympanum containing the Royal Arms above and large stone cupola incorporating a clock; central round-headed doorway with a keystone; flanking bays have round-headed windows on the ground floor, upper windows flanked by giant stone pilasters. Outer bays have paired two-light ground floor windows divided by mullions with heavy vermiculated rustication. All first floor windows have broken pediments: below the outer windows, panels carved with the names of Drake, Hawke, Howe and Nelson. Under the parapet the inscription: "It is on the navy under the good providence of God that our wealth, prosperity and peace depend". Three bay, two tier porticos flank the entrance block, the rusticated bases of the columns engaged to single-storey blocks with parapets.

Outer bays of the thirteen bay wings have wide pilasters, the bays to the centre of the range each with a broken pediment with carving, cupolas, and a canted bay on the ground floor; the bays at the end each with a balustraded parapet and canted ground floor bay. Centre bay of each wing contains a round-headed doorway and is flanked by pilasters which rise above the roofline. The other bays are regular and divided by stone pilasters with an entablature at second floor level: three-light windows on the ground floor; two-light on the first floor; second floor windows two-light with broken pediments.

The right-hand pavilion (the captain's house) is two storeys and attic, in the same style, set forward from the main range with an entrance on the inner return. The house has domed corner projections and an asymmetrical entrance elevation with a grand pedimented doorway. The chapel tower, with a domed roof, rises to its rear.

The left-hand pavilion contains the ward room, with a tower and a domed roof beyond. The ward room is single-storey with a roof hipped to the front with a balustraded parapet; three bay front with pilasters and massive windows with two tiers of transoms. The parade ground in front and below the main range has round-headed arches with keystones in the terrace wall. The other elevations of the main college buildings are a plainer version of the front and the c1914 block is designed to match.

INTERIOR: partially inspected. The galleried great hall is four bays with a half bay at each end; open timber roof with moulded transverse stone arches with oculi in the gables, the trusses are supported on wall plates with timber brackets carved with naval devices in the centre of each bay. The galleries bow out in the centre of each bay with a wrought-iron balustrade. The north west end wall has four tall round-headed slit windows above a central niche and, in a recess below, a full-size 1910 white marble statue of Edward VII on a plinth signed Hamo Thornycroft.

The chapel has a four bay nave with a tie-beam truss roof joined by longitudinal timbers; vestigial aisles. Round-headed chancel arch; barrel-vaulted chancel roof with a transverse stone arch; five-light traceried east window; east wall with chequerboard frieze flanking the east window and panels of Italian marble on either side of the seven bay carved reredos. The west end has an internal three bay narthex with a gallery over.

Kempe Studio windows of 1907-11 (Pevsner). The Gun Room, to the rear of the ward room, is galleried at the south west end and has a barrel-vaulted roof with transverse ribs decorated with crowns, roses, thistles and the Royal Arms. At each end, the upper half of the wall is filled with a massive twelve-light window with two moulded king mullions and a transom; high-set round-headed windows to each side. Chandeliers in the form of sailing vessels, glass in windows incorporating dolphins in the leading, etc. Ward Room not inspected. The corridor that runs between the Gun Room and Chapel is said to be one of the longest in any European building. It has a vaulted roof and a dado of glazed bricks.

HISTORY: in 1863 the Admiralty stationed HMS Britannia in the Dart as a training ship for naval cadets. In 1865 she was joined by HMS Hindustan. By 1875 it was decided to build a land-based college, but the land was not acquired until 1896. Webb began work on the terraces for the main college in 1898 but, when two cadets died of influenza on Britannia, the sanatorium was built first. Edward VII laid the foundation stone of the college in 1902. The Hindustan was towed down to Plymouth in 1905 but the Britannia stayed until 1916.