A Grade I Listed Building in Clerkenwell, Islington 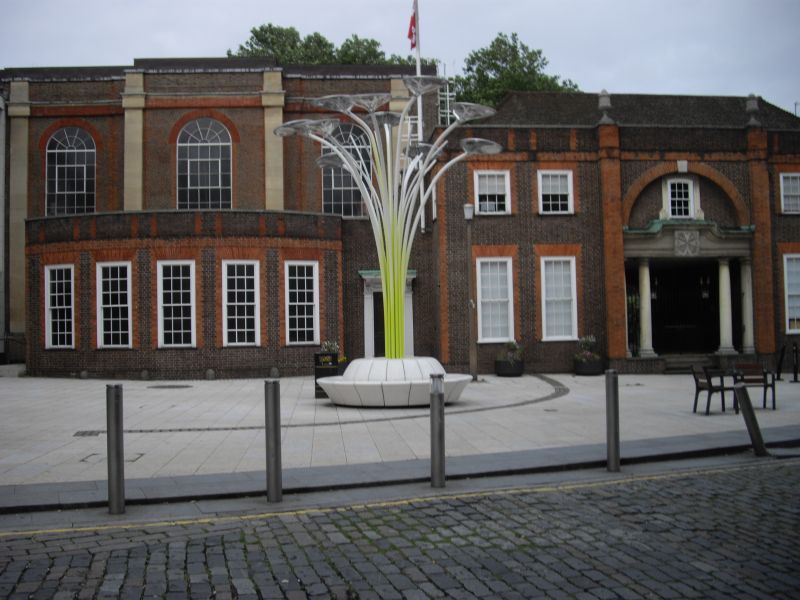 Anglican church. Crypt of c.1140 and c.1180; the main body of
the church partly of C16 and partly of 1723 by Simon Michell;
restored by Lord Mottistone after bomb damage, c.1958. Coursed
rubble stonework and dressed stone, red , purple and yellow
brick set in Flemish bond with dressings of gauged red brick,
roof of copper.
East end: the walls consist mostly of coursed rubble stonework
to the lower parts, of dressed stone level with the windows,
and of red brick above; an entrance below the northernmost
window formed in yellow brick and concrete, presumably in
1958. Three pointed-arched windows with rectilinear tracery
and hoodmoulds, the centre window of five lights, the outer
ones of four; three buttresses flank the two southernmost
windows, with offsets, the northernmost carried up to the
parapet in brick. Parapet with moulded stone string and
coving. South wall of three bays, the pointed-arched windows
having hollow- and wave-moulded embrasures and rectilinear
tracery; medieval rubble buttress to east end with some brown
brickwork above; then three buttresses mostly of dressed
stone, rectangular in plan as far as the offset, then
triangular, the two outer buttresses chamfered with run-out
stops, and the westernmost having stops carved with the badge
of Prior Docwra and a rose; the middle of these three
buttresses inscribed 'This area was constructed, the south
side of the church extensively repaired and the tracery of the
windows renewed 1907'; pointed-arched entrance in middle bay;
stone string above buttresses and parapet of red brick. The
west front has two levels of windows and three-window range,
the middle bay projecting, and the bays divided by stone
pilasters with capitals of simple Doric form; most of the
lower part obscured by the single-storey vestibule added in
1958; segmental-arched window to ground-floor left bay with
head of gauged red brick; upper windows round-arched with
heads of gauged red brick; cornice of gauged red brick;
parapet.
INTERIOR: . The church is now a simple rectangular space;
panelled ceiling dating from Lord Mottistone's restoration of
c.1958, as does the canopy over the altar, the pilasters,
brackets and ornaments, some of which were rescued from the
remains of Simon Michell's work. C12 footings of columns
either side of canopy. Crypt of five bays, the westernmost
barrel-vaulted; then three bays with round arches and
cross-vaults, of c.1140; and a final bay with pointed arches
and cross-vaults, of c.1180; the arches are moulded and ribbed
and spring from triple-clustered shafts; lancet windows to the
three round-arched bays, with deep embrasures. North and south
chapels also of c.1180 with pointed arches and cross-vaults.
Alabaster effigy of Don Juan Ruyz de Vergara, c.1575, in the
body of the crypt, formerly in Valladolid cathedral; plinth of
1915; effigy of Sir William Weston, c.1540, in north chapel,
formerly in St James's church, Clerkenwell.