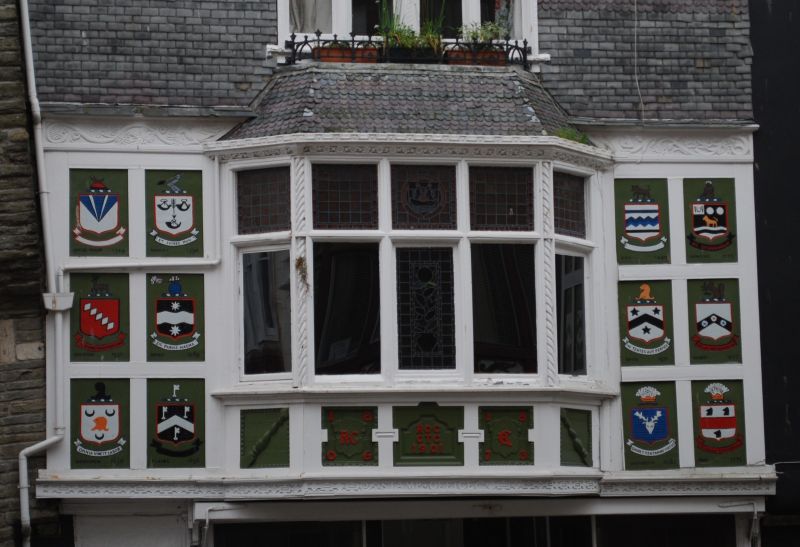 Merchant's house, refurbished as a Stamp Office, now a
cafeteria with house above. Late C16/early C17, refurbished
1901 for RC Cranford, ground floor altered more than once
since for cafeteria. Mixed construction; stone rubble side
walls, timber-framed front and back walls; party-wall stone
stacks with C17 Dutch brick chimneyshafts (star-shaped
chimneyshaft of 1664 shared with No.4 The Quay (qv)); slate
roof.
PLAN: Original house built end onto the street with a 2-room
plan and side passage alongside left (northern) party wall.
EXTERIOR: 3 storeys and attic; one-window front built in the
attractive eclectic Elizabethan style favoured by CR Cranford
(cf. Nos 1-3 Fairfax Place (qv) opposite). Ground floor has
side passage entrance to left, a 6-panel door with plain
overlight. Shop front flanked by posts from 1901 enriched with
guilloche but otherwise altered in the early C20 for cafeteria
with deeply-recessed central doorway. Good 1901 work above.
First floor has central oriel with canted sides and moulded
mullion-and-transom windows containing original stained glass.
Corner posts carved with twists, embattled cornice carved with
flowers and hipped roof of scallop slates up to a second-floor
flowerbox ledge enclosed by an ornamental crest of
cast-ironwork. Moulded small-field framing either side of the
oriel under timber frieze of carved vines, pargetted panels
containing arms of famous Dartmouth sons. Similar decoration
below oriel with centre panel dated 1901 with initials RCC and
CTC. Timber frieze below carved with strapwork and in the
centre "Stamp Office". Second-floor level is slate-hung
including bands of shaped slates. Centre pair of
mullion-and-transom windows containing sashes, guilloche
carving to king mullion. Timber eaves cornice carved with a
blind arcade. Roof parallel to the street with front 4-light
mullion-and-transom gabled half dormer; apex infilled with
ornamental slate-hanging and carved bargeboards on C17-style
carved brackets.
INTERIOR: Ground-floor features of c1901 include circular
open-string stair with decorated brass balusters, the moulded
box cornice could be earlier. Older work survives on the upper
floors: first-floor front has a splendid oak-panelled
chimneypiece dated 1585 with the initials AIC (each in a
separate panel), richly carved with fluted pilasters - it now
contains a good Adam-style chimneypiece. Access to the rest of
the house was not possible, although it is said to have a
newel stair and at least one C17 panelled door.
HISTORY: This plot was leased by the Plumleigh family from
1585 until after 1700. In 1655 this property was leased to one
Anthony Plumleigh whilst the adjoining property, No.4 The Quay
(qv), was leased to Robert Plumleigh, both were mariners.
The property here was built on land reclaimed from the estuary
in the 1580s and thereafter Fairfax Place/Lower Street became
one of the main trading streets in Dartmouth. It connects the
old quay at Bayards Cove with the New Quay around the present
Boat Float.
(Proceedings of the Devon Archaeological Society: Thorp, John
RL: 4 The Quay, Dartmouth: A Devon town-house of 1664: 1983-:
P.107-122).