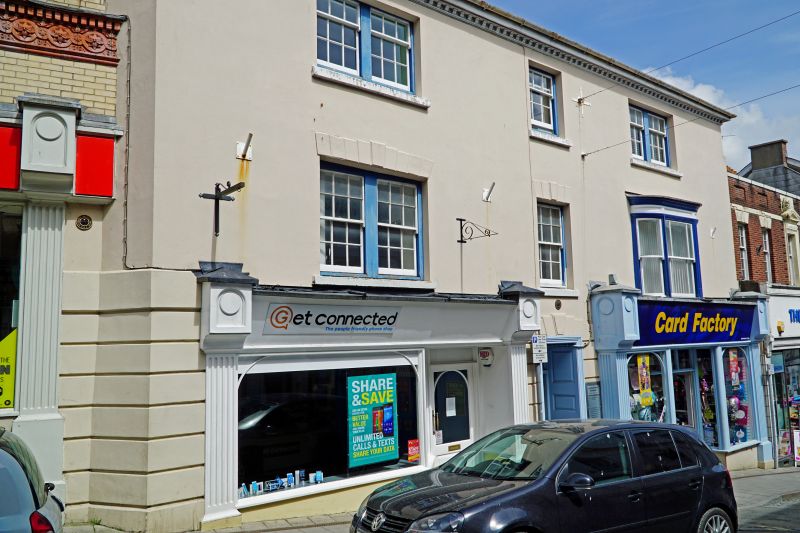 Large house, now shops with flats above and at rear. Early
C17, or possibly earlier; considerably remodelled, and
probably enlarged, in C18 and early or mid C19. Solid rendered
front. Hipped tiled roof to front range. Base of rendered
chimney on right side-wall; other chimneys at rear.
Plan: front range double-fronted and double-depth with central
through-passage. Upper storeys 3 rooms wide, the front and
back rooms separated from each other by a thick wall
containing the chimneys; this is probably the original back
wall, the range having been doubled in depth in C18 and C19.
At the back is a courtyard (largely infilled by a late C20
single-storeyed building) with left and rear ranges possibly
of C18 or before; also short projection which may be the rear
end of a former right-hand range.
3 storeys; 3-window range. Ground storey has two C20 shop
fronts, but small sections of early or mid C19 render with
horizontal channelling remain at left-hand end and to left of
house-door; also one end of a raised band above the
channelling. House-door of similar date to the render:
6-panelled, the 2 lowest panels flush, the top 2 now glazed.
Deep panelled reveals; moulded architrave.
Upper-storey windows have barred sashes, except for late C19
bay window at right-hand end of second storey. Outer windows
wider with 2 pairs of sashes; all are 6-paned, apart from
3-paned upper sashes in third storey.
The 2 left-hand second-storey windows have raised cement
voussoirs and keyblocks with bevilled edges. Bay window is of
3 lights with sashes, the outer ones curved, the middle one
with margin-panes; entablature at the top with panelled
frieze; bracketed eaves cornice.
Rear wall and courtyard ranges have windows with barred
sashes; one in rear range flush-framed.
INTERIOR: shops wholly altered, but through-passage has door
with 6 ovolo-moulded panels. To left of it, between the shop
and the back room, a C19 wooden dog-leg stair with turned
newels and balusters. Second-storey rooms in front range have
C19 panelled doors; one C18 with 6 ovolo-moulded panels having
raised, shaped centres. Right-hand front room has a
high-quality moulded early C17 ceiling with broad enriched
ribs and flowers in the panels. Third-storey rooms have two
C18 2-panelled ovolo-moulded doors with strap-hinges; another
6-panelled door with shaped raised centres to the panels.
No 73 (front left-hand side of building) not inspected, but
rear range (part of No 74) has old roof with collars halved
and pegged to the principal rafters. Other early features, at
present concealed under plaster, could survive in any part of
this building complex.
(Notes from Bridge Trust Records in N Devon Record Office;
Bideford Weekly Gazette: 1892-: 5.7.1892, P4; Wilson's
Bideford Almanack: 1888-: PP.7, 9).