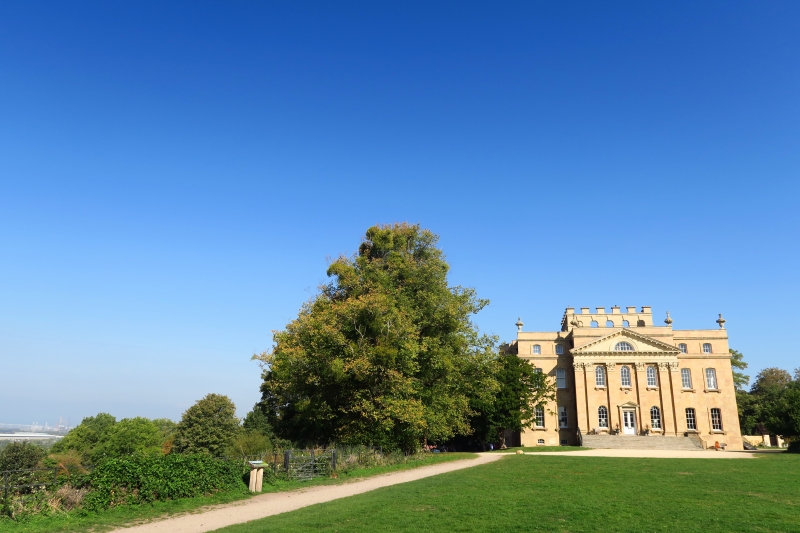 House. 1710-25. By Sir John Vanbrugh. Altered 1764-75 by
Robert Mylne. For Sir Robert Southwell. Limestone ashlar,
ashlar ridge stacks, roof not visible. U-shaped double-depth
plan. Baroque style. 2 storeys, attic and basement; 7-window
range.
An attached portico of 6 giant Corinthian columns, paired at
the ends, steps forward at the top of a flight of steps, with
flanking projecting ends, a cornice band under the attic
storey, and a string below a full-width parapet with large,
flaming corner urns; the small, central pedimented doorway has
tapering pilasters and 2-leaf half-glazed door. The portico
windows have semicircular heads and bracketed cills, with
6/6-pane sashes, and a lunette in the pediment; the ends each
have 2 windows with segmental heads and flat surrounds. A
chimney arcade of square stacks linked by semicircular arches
and an impost band follows the plan of the house.
The SE front has a central section with steps up to a
tripartite rusticated Doric doorcase with a wide, shallow
pediment, alternate vermiculated jambs to a C19 8/8-pane and
flanking plate-glass sashes, with a large key rising through
the open entablature; above is a large window with a cornice
on scrolled brackets, flanked by semicircular-arched windows.
Above the modillion cornice the attic string is broken by a
keyed, semicircular-arched window, below a raised, bracketed
parapet.
The NW front has a slightly projecting centre with a c1770
canted bay. The plainer rear NE elevation has a deep recess,
reduced by Mylne, and the chimney ranges turn in on
themselves.
INTERIOR: decoratively almost entirely of Mylne's
re-modelling, 1764-8, with plasterwork by Thomas Stocking. The
front Stone Hall or Saloon has a flagged floor, plaster
surrounds with garlands to portraits, and a palmette frieze at
the height of the pedimented doorcases, which have half Ionic
column jambs, and a grey marble fireplace by Derall.
The rear Stair Hall is the most unaltered part of the
interior, ground-floor semicircular-arched wall niches, with
paintings of 1719-20, and doorways all round, and a very fine
hanging open-well staircase to the first floor, with turned
balusters, fluted newels, curtail and ramped rail; open
galleries to the first and second floors and 9 late C18 roof
lights; a fine early C18 timber fireplace with fluted Ionic
pilsters and blue tiled back. Most of the other rooms have
neo-classical plaster decoration of the Mylne period. Original
vaulting to the basement.
HISTORICAL NOTE: built for Sir Robert Southwell, on the
foundations of the existing manor house, by George Townesend.
One of Vanbrugh's smallest houses, yet achieving a monumental
effect of great compression and tightness.
(The Buildings of England: Pevsner N: North Somerset and
Bristol: London: 1958-: 469; Architectural History: Downes K:
Kings Weston Papers Catalogue: 1967-).