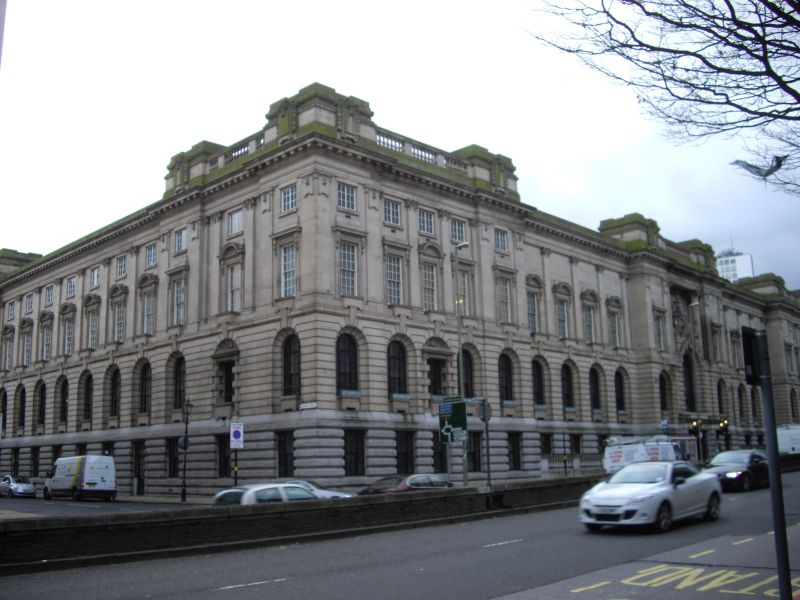 II*
1874-9 by H R Yeoville Thomason. Stone; tile roof. Three storeys plus basement; three bay centrepiece plus eight bay wings whose outer bays are advanced and carry segmental pediments. The centre piece with a wide and deep porte-cochere carrying a balcony behind which a central arch with mosaic tympanum by Salviati flanked by Corinthian piers and columns carrying a pediment with carved relief. Behind this, a dome on a high drum. Either side windows with shoulders and the first and second floors articulated by giant Corinthian pilasters.

Inside, a grand staircase beneath the dome leads up to a suite of three reception rooms on the first floor with Corinthian pilasters and coffered ceilings. The Council Room is small and semi-circular. On the left hand return, the entrance to the City Museum and Art Gallery which occupies part of the same site. 1881-5 and also by Yeoville Thomason. In general design and decoration the building follows the Council House. The entrance up steps within a two storeyed portico with sculptured pediment. To its left 'Big Brum', a tall clock tower with tiled roof. At the head of the main staircase of the museum, a fresco, Corporation Street in March 1914, by Joseph Southall 1915-6. Joined to the main building by a bridge on a broad segmental arch over Chamberlain Square and bounded by Great Charles Street, Queensway B3, Congreve Passage B3, Chamberlain Square B3 and Margaret Street B3 is the Council House extension housing also the Feeney Art Galleries of the City Museum and Art Gallery. 1911-19 by Ashley and Newman. Stone. Two storeys plus basement and attic. In an Edwardian Renaissance rather than Baroque style with banded rustication to the ground floor and a giant order in the upper floors.

HISTORICAL NOTE: in 1913 suffragettes from the militant suffrage organisation the Women’s Social and Political Union (WSPU) launched a spate of attacks on art galleries and museums in Britain. Most took place between March and July 1914, with the majority in London, and a small number of others elsewhere. The attack at Birmingham Art Gallery on 9 June 1914 was carried out by Bertha Ryland, a 28 year old suffragette who had two earlier arrests for militant activities. Ryland used a butcher’s cleaver hidden in her blouse to hack at ‘Master Thornhill’, a painting by George Romney, causing £50 worth of damage. She was arrested at the scene and identified from a note she left giving her name and address and protesting against the differential treatment of suffragette prisoners and Irish militants.