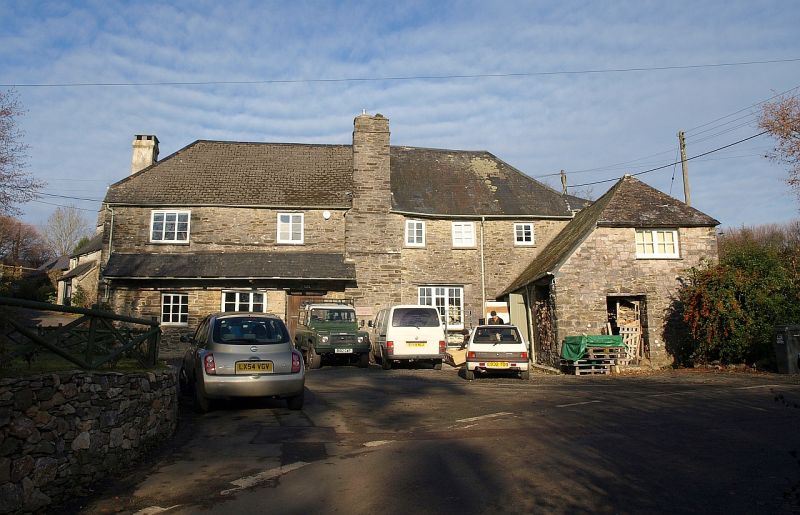 House probably originally the church house. Probably early C16, it is
reputedly mentioned in a deed of 1518; remodelled in circa early C17, and
an outbuilding extension of circa late C17 or early C18. Local limestone
rubble. Steeply pitched slate roof, hipped at right end and hall hipped at
left end. Projecting lateral stacks to front and rear of hall and end
stack to left; truncated lateral stack to left of front.
Plan: 3 room plan, the lower end to the left and a smaller inner room to
the right. The doorway is to the left of centre directly opposite a partly
blocked full height early C16 window which if it is the original hall
window in situ would suggest that either the existing doorway is not the
original or there was a direct entry into the hall. If the house were
partly or entirely open to the roof originally the floors were inserted in
circa early C17. There is a solid wall partition between the hall and
inner room which is unheated. The hall has a front lateral stack and the
lower left hand room a gable end stack. The chamber over the hall was
heated by a rear lateral stack and the chamber over the lower left room
heated from a front lateral stack. Judging by the lintel with bar stops
the inner room had a front doorway in C17 (under it was originally a
window) which leads to an outbuilding which was added at right angles to
the front of the right hand end.
Exterior: 2 storeys. Asymmetrical 5-window range. Small C20 2- and 3-
light casement on first floor and C20 3-light casements on the ground
floor. Two of the ground floor windows are in doorway openings which
themselves are later alterations. Doorway to left of centre with C20 plank
door and door frame. Slated pentice roof over the doorway and ground floor
windows to left on chamfered timber cantilevers. Projecting front lateral
stack to right of centre with tapered top and weathering.
Rear elevation: to right of centre the top of half of a (the hall?) window
survives; it is a 2-light wooden mullion window with roll mouldings and 4-
centred arch lights timber spandrels and leaded panes; a doorway has been
inserted into the bottom hall of the window; the stopped chamber lintel
above is however too long for the opening. Large masonry raking buttress
either side of the doorway. To left of centre a rear lateral stack with
set-off and rebuilt shaft. Various C20 2-light casements with glazing bars
and timber lintels. Wing at right angles to right of front is circa late
C17 or early C18. Outbuilding, the inner (west) side is partly open but
with C20 garage door; hipped slate roof, C20 2-light casement on first
floor of end wall; hipped slate roof.
Interior: The lower left hand room has a chamfered hall-beam in gable end
wall cross-beam and head beam to screen which has been removed. Very long
fireplace lintel with step stops and stone rubble jambs; the front window
lintels are chambered with scroll stops. The hall has 2 cross-beams with
multiple roll moulds with bar stops, the stops are buried in the rear wall;
front lateral fireplace with chamfered lintel with bar stops and stone
rubble jambs. Solid wall between the hall and inner room. The inner room
has a chamfered hall-beam in the end wall and a chamfered front doorway
lintel with bar stops. The first floor left hand room has timber corbelled
fireplace lintel ovolo moulded with scroll stops, on front wall.
Roof: the collars are pegged to the face of the prinicipal rafters and the
purlins are trenched.