A Grade I Listed Building in Southwell, Nottinghamshire 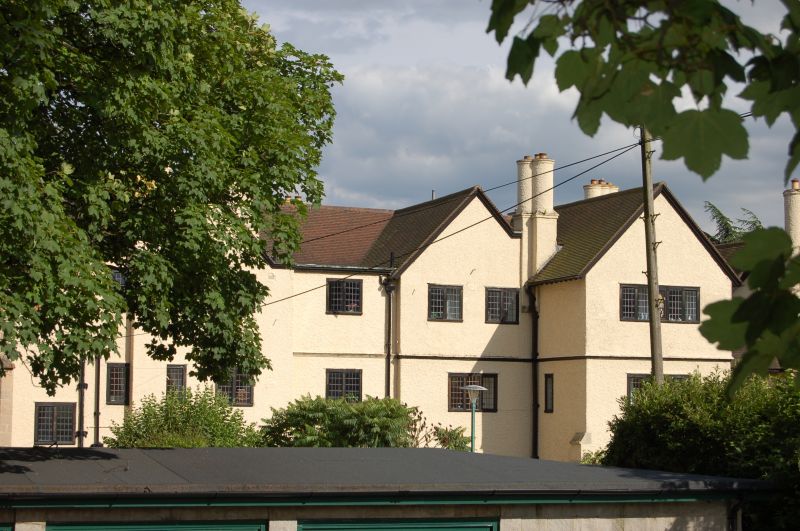 GV
I
Bishop's Manor (official residence of the Bishop of Southwell) and remains of Bishop's Palace. Bishop's Palace probably built for Archbishop Alexander Neville and Archbishop Arundel between c1379 and 1396. Rebuilt and extended for Archbishop John Kemp, 1426-36, and extended for Archbishop Rotherham c1490. Occupied 1647 by the Scots Commissioners and largely demolished. House built in former Great Hall, late C18. Former State Chamber restored for suffragan Bishop Edward Trollope, 1881. Bishop's Manor, incorporating the C18 house and the west range of the former Palace, by W.D Caröe, 1905, in a vernacular revival style.

Bishop's Manor, roughcast and colourwashed, has ashlar dressings and hipped and gabled plain tile roof. Plinth, six side wall and two gable stacks, most of them with round shafts. Windows are mainly mullioned and cross mullioned casements with leaded glazing. Irregular west entrance front, three storeys, eight windows, has an off-centre three storey tower porch with diagonal buttresses and a segment headed doorway covering a door to the screens passage of the original palace.

Rear elevation, C18 house with three glazing bar sashes and above, four box dormers. Below, three round headed glazing bar sashes. State chamber interior has an arch braced triple purlin roof with collars and wind braces, on angel corbels, some of them medieval. North side has a restored moulded fireplace with billeted frieze, and moulded arch with shafts to bay window. East end has a double chamfered C14 doorway each side. Porch has moulded C14 style doorways and C19 stone staircase.

Bishop's Manor interior has the triple arched opening to the pantry and buttery of the original palace, and fragments of the Great Hall west window.