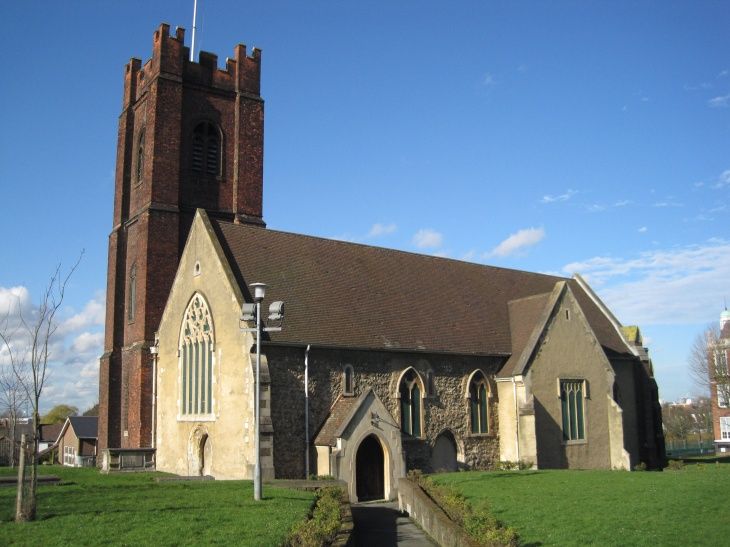 Church. Nave and aisles, west tower and chancel. The present south aisle was the original nave and is of medieval date: the west wall is C12, the south wall C13, with arched doorways and windows within. C14 blocked doorway at east end of south wall. Random rubble masonry with restored parts roughcast. The north aisle was added in C15 to the medieval nave and now forms the present nave. The church was restored in 1867-8 by C.H.Cooke, and enlarged on the north side in 1907-8 by Greenaway and Newberry, in Arts and Crafts Perpendicular style. The new arcade matches the old one. The chancel is of the same period, all of purplish brick with stone dressings. High-pitched tiled roof. Foundations of medieval south transept visible on south side of church. Tower built into the church at the west end, 1664: 3 stages, brownish-red brick with corbelled stone cornice, battlemented parapet and angle turrets. Simple window tracery of moulded brick. INTERIOR: Timber arch-braced collar-beam roof. North aisle: C15 4-bay arcade with hollow-chamfered arches on octagonal columns. Fittings: High altar, altar and baldacchino in north-east chapel, font, clergy and choir stalls all by Stephen Dykes Bower; reredos painting by Donald Towner. East window by Martin Travers. All these date from post-war restoration of the church by T.F.Ford & Partners, 1959. Memorials: some C18 tablets, including one to British Defence Engineer, William Green, Bart. R.E.