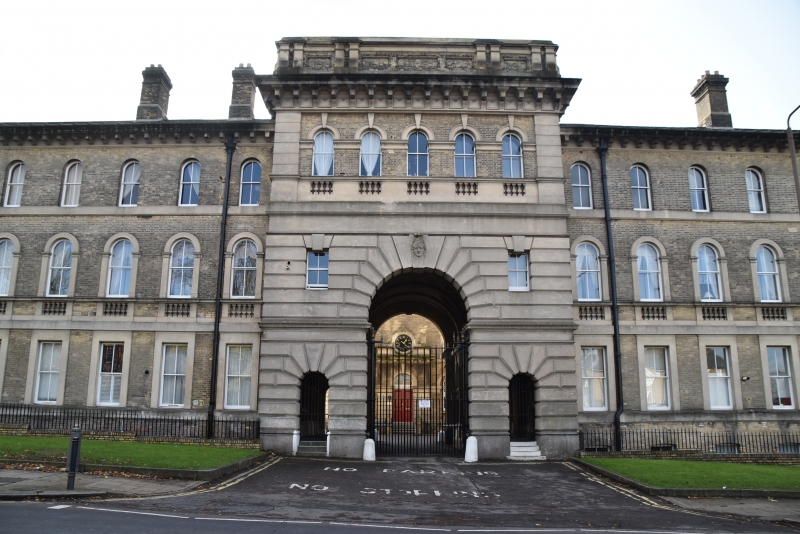 Military hospital, now flats. 1859-65, by Captain Douglas Galton RE, with R O Mennie, Surveyor of Works to the War Department; converted c1992. White Suffolk bricks with Bath stone dressings, fireproof internal construction, and slate hipped roof PLAN: symmetrical plan of a spine corridor witl1 wards off, two each side at the ends, a shorter central rear ward connected to a front chapel and library within a central courtyard, and facing an H-shaped front entrance and administration block to the road. EXTERIOR: Italianate style. Front range 3 storeys and basement; 3:9:5:9:3-window range; pavilion wards 2 storeys and basement; 9-window ranges. Former administration block has ~l1d and central sections set forward with clasping rusticated pilaster strips, plat bands, balustrading under the windows, a deep bracketed cornice and parapet. The centre has banded ashlar rustication to .2 storeys, with a large round through-archway to the central courtyard. Flanking sections have flat-headed ground-floor and round-arched upper windows, the upper ones without architraves. The ward blocks have plat bands and cornice, flat- headed 6/6-pane sashes, with articulated corner sanitary towers containing narrow lights, with a wide round-arched end casement window. The chapel has a 3-window N end with clasping pilaster strips, round- arched ground-floor and second-floor openings with a central doorway, and a central first-floor balcony with a round clock face; the sides have tall round-arched windows. The wards are connected by a single-storey covered way the full width of the building; at the E end is a single storey former isolation ward, and at the W end a 2-storey annexe formerly containing an operating theatre. Open walkways with cast-iron supports connects the front range to the wards and chapel. INTERIOR not inspected, but noted as being of fireproof construction, with iron stairs on trussed girders, and concrete floors. The chapel reported to contain a gallery on iron posts and an elliptical-arched ceiling. Subsidiary features: Quadrant decorative iron railings with cast-iron coping connect ends of front range with piers and large cast-iron lamps, and extend approx. lOOm to the Wand approx. 7OOmm E along Shooters Hill Road, Well Hall Road and Broad Walk to the Wand rear; a battered retaining wall encloses a terrace to the S of the former hospital. HISTORY: The Royal Herbert was the first large-scale hospital to embody the pavilion concept of separate, cross-lit wards, well ventilated, with wash rooms and lavatories separated by a lobby in the corner towers. The plan of this seminal building was of great importance in the development of hospital design. It included advanced systems of construction, heating and ventilation, and marked the ascendancy of the sanitary reformers led by Florence Nightingale. She described the Herbert as 'by far the finest hospital establishment in the United Kingdom, or indeed Europe' (quoted in RCHME Report). The pavilion principle dominated hospital design in England for the next fifty years. The front range included offices, accommodation for the Governor, and nurses' dormitories. This is a remarkably complete building, notably so for a hospital, set within its original grounds, and is one of the most important examples of its type in the country.
(RCHME report, NMR, Swindon)