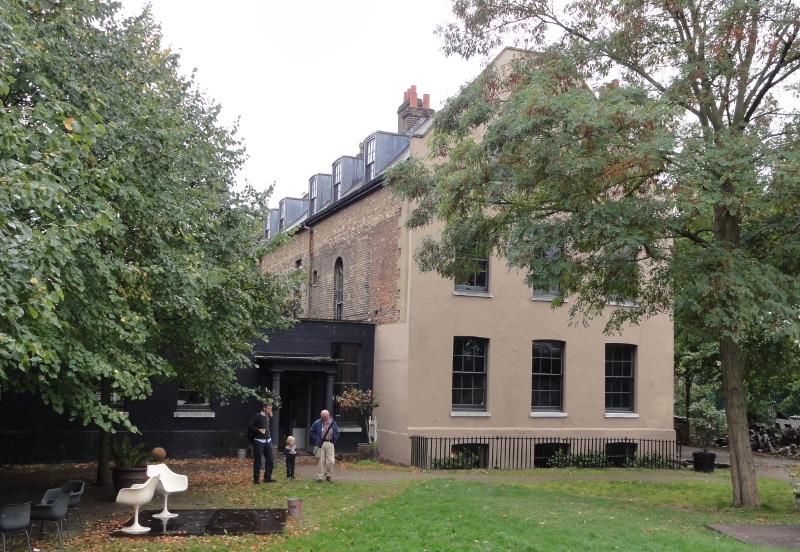 GV II*
House, built 1708 as the residence of the Master Shipwright to the Royal Naval Dockyard, Deptford, on the site of an earlier building. Probably designed by Joseph Allin, appointed Master Shipwright in 1705. Single-storey range added to the NE in 1710. House and NE range remodelled c1805-9. Two-storey extension added to end of NE range in 1809. Refurbished late C20 and early C21.

PLAN: The original internal plan, comprising a series of rooms to the north and south of the entrance hall and principal stair, is unclear, having been extensively remodelled including the removal and insertion of chimneystacks and changes to the room plan, creating larger spaces on the N side. Rooms in S part of the house arranged along a spine corridor. The attic was divided into seven small servants' rooms.

EXTERIOR: Aligned N-S with gable-end facing river, the house would have had views across the whole dockyard. Two storeys high plus basement and attic. The steeply pitched M-roof is asymmetrical, with the higher portion on the front (W) side; the eaves on the E side are higher. Principal elevation of eight bays arranged 2:1:5 with the entrance in the broader single bay. Windows have flat gauged-brick arches, those to the basement have segmental arches. Plat band between storeys, a break in which above the entrance indicates the position of a tall doorcase. A lighter silhouette in the brickwork indicates that there was a lower, later-Georgian doorcase, of which the architrave and panelled lining remain; panelled door is a recent reinstatement. Entrance has short flight of steps with an iron handrail. There are two late-Georgian 6-over-6 pane sash windows on the upper floor; the remainder reinstated to match. Parapet is a late-Georgian addition. Five segmental-headed dormers to attic, remade in the 1990s.

The N elevation facing the river originally had two doors and irregular fenestration; the shaped gable, by 1705 a somewhat old-fashioned feature, was possibly intended to disguise the asymmetrical roof profile. This elevation was stuccoed and remodelled in the late C18 or early C19, and given a symmetrical three-window façade with two windows at attic level, and the gable given a coped parapet with a flattened head which does not quite disguise the unequal eaves heights.

Rear (E) elevation has a stuccoed ground floor with extensively patched brickwork above. There are areas of red brick laid in English bond. The fenestration is irregular and of different dates, with a tall round-arched late-Georgian window lighting the main stair. There are five segmental-headed dormers, largely remade in the 1990s. S elevation, abutting the Office Building, has one exposed bay; there is a later French window at ground floor and an early-C19 panelled door at basement.

NE range has an early-C19 porch on N elevation carried on Doric columns, and curved bay window on S elevation; sash windows have recently been reinstated.

INTERIOR: Open-well principal stair, rising from ground to first floor, has an open string with silhouette tread ends, ramped handrail and inner string, twisted balusters (some on the bottom flight replaced), Doric newels, and a curtail step. Basement flight removed, probably in early C19; a door surround that was at its head survives. The secondary stair, located in the rear of the next bay to the south, may be a later insertion (there is a trimmer, possibly for an angle stack, in this position in the roof); the handrail is typical of the later C18/early C19 while the turned balusters are old-fashioned for that period. The flight to the attic is clearly early C19. The oak roof structure is original; its asymmetrical form is unusual and consists of five trusses bearing undisrupted sequences of carpenters' marks. The principals are cranked on the east side, resulting in the higher eaves level, possibly to provide greater headroom.

There is extensive survival of late-Georgian joinery at all levels, including panelled doors, architraves with reeded decoration, and shutters; a number of features have been reinstated to match. Doorway on N side of main stair landing has curved panelled jamb on one side. Access to basement is via a stair from NW corner of E wing, probably inserted in the early C19. N basement room was (and still is) a kitchen and has a stone-flag floor and C19 range. Some plain early-C18 panelling in area beneath the entrance hall, brick shelving and an early-C18 door with glazing bars. The attic rooms have a number of early-C19 cast-iron basket grates.

The E wing, the remodelled brewhouse, has a barrel-vaulted cellar. The two-storey extension has an upper-floor room with plain panelling.

HISTORY: Deptford was established as a centre for naval shipbuilding by the late C15. The accession of Henry VIII (1509) marked a massive programme of naval expansion: Woolwich Dockyard was established in 1512, and in 1513 Henry began the development of Deptford by building a great storehouse; by the 1540s the 'King's Yard' at Deptford had become by far the most important royal dockyard nationally for the construction and repair of warships. Sir Francis Drake was knighted here in 1581, and his Golden Hind was exhibited here for over 70 years. In the C17 Deptford was the second major centre for shipbuilding after Chatham, established under Elizabeth I, gained pre-eminence in this respect; the navy board appointed a Master Shipwright in both places. It was to Deptford that Tsar Peter the Great came for three months in 1698 to learn shipbuilding techniques, and its proximity to the Navy Board Office in the City of London meant that it was frequently chosen for experimental construction. However, the shifting of hostilities to France and Spain in the C18 meant that Portsmouth and Plymouth gained pre-eminence. A number of well-known vessels were fitted out at Deptford, including Captain Cook's Endeavour and Discovery, as well as ships used in Nelson's campaigns. Despite navigational difficulties due to the silting up of the Thames, and the yard's consequent inability to service larger ships, further expansion took place in the C18 when the yard reached an area of some 30 acres. It fell into decline after 1815, closing in 1869, when the site was acquired by the Corporation of London for use as London's Foreign Cattle Market. The handsome late-C17 officers' terraces which stood to south of the Master Shipwrights House and Offices were demolished in 1902. The dockyard suffered massive destruction in WWII, and was redeveloped as warehousing known as Convoy's Wharf in the 1950s, when the bomb-damaged Tudor storehouse was demolished. The buildings to the S of the Master Shipwright's House and Office range, probably rebuilt in the C18, were also destroyed.

The Master Shipwright's House and adjoining Office Building stood in the dockyard's NE corner, alongside the great Double Dry Dock. An annotated sketch plan of 1623 by the diarist John Evelyn, who lived at Sayes Court to the west, and late-C17 plans, indicate that the present buildings occupy the site of a single-storey range; a plan of 1698 shows a 'builder's dwelling house' on the approximate site of the present Master Shipwright's house. The Master Shipwright was the senior technical officer in the Dockyard with considerable responsibility. He was expected to live in the dockyard and a house was provided with the job. Joseph Allin, appointed Master Shipwright to the Dockyard in 1705, petitioned the Navy Board for permission to rebuild his 'ancient and decayed' quarters; plans were approved on 13 February 1707/8 to build a new house 'on the ground where the old house now stands' at an estimated cost of £525; the building was completed in the spring or summer of 1708. The house was built by dockyard employees, probably to Allin's design. Whether it was entirely rebuilt or substantially remodelled - the latter possibility being suggested by the irregularity and asymmetry of the elevations and plan, and (possibly) earlier brickwork on the rear elevation - is unclear; a survey by Edward Dummer, Surveyor to the Navy however indicates that the earlier house was timber framed as does a plan of 1698 showing a multi-gabled, weatherboarded building. The adjacent Office Building to the south was rebuilt in 1720. The present house is identified on a detailed plan of 1753 as the 'Master Shipwright's Apartment'. A plan of 1774 shows the range comprising (from south to north) 'the pay offices; the 'Tap House'; boatswains lodging and garden; Officers Offices and the Master Shipwrights Lodging and Gardens'. Views of the house show that it had a shaped north gable, which a model of the Dockyard of 1774 indicates was repeated on the south elevation.

A single-storey brewhouse range was added to the NE in 1710, reusing bricks from demolished buildings on the site. The house's rear wall was also the dockyard boundary wall until at least the 1760s, when houses to the E, in what was then King Street, were purchased and demolished and the land allocated to the house. The house was remodelled, possibly in more than one phase, in the late-Georgian period. Internal alterations are recorded in 1805 under Edward Holl, Chief Architect to the Navy, following the appointment of Sir Henry Peake as Master Shipwright in 1803, and timber marks estimated to date from 1804 and 1809 have been identified; internal features are stylistically consistent with this date. The brewhouse range was also remodelled as a garden room and entrance hall, and a two-storey extension added at the east end, dated by timber marks to 1809.
Research suggests that these timber markings are the first tangible evidence for new timber management systems introduced under the reforms of Sir Samuel Bentham, appointed Inspector General of Naval Works in 1796.

REASONS FOR DESIGNATION: The former Master Shipwright's House at the Royal Dockyard, Deptford, is designated at Grade II* for the following principal reasons:
* Architectural interest: although altered, a handsome Queen Anne house remodelled internally c1804, retaining significant fabric from both phases
* Rarity: early-C18 naval buildings are rare nationally; it is also the only surviving example of a purpose-built Master Shipwright's residence in a naval dockyard nationally
* Interior: retaining fittings from 1720, notably the principal stair, and extensive joinery from the c1804 remodelling
* Historic interest: the house and adjoining Office Building (qv) are the sole remaining buildings of the C18 and early-C19 naval dockyard, occupying the same site as their Tudor/Stuart predecessors, in one of the earliest sites connected with Britain's emergence as a world naval power; this historic interest is evident in the house's carpentry and construction which ties it explicitly to the naval dockyard
* Group value: with the adjoining former office building (qv) and the scheduled site of the Tudor Store House, which is located 40m to the north-west.