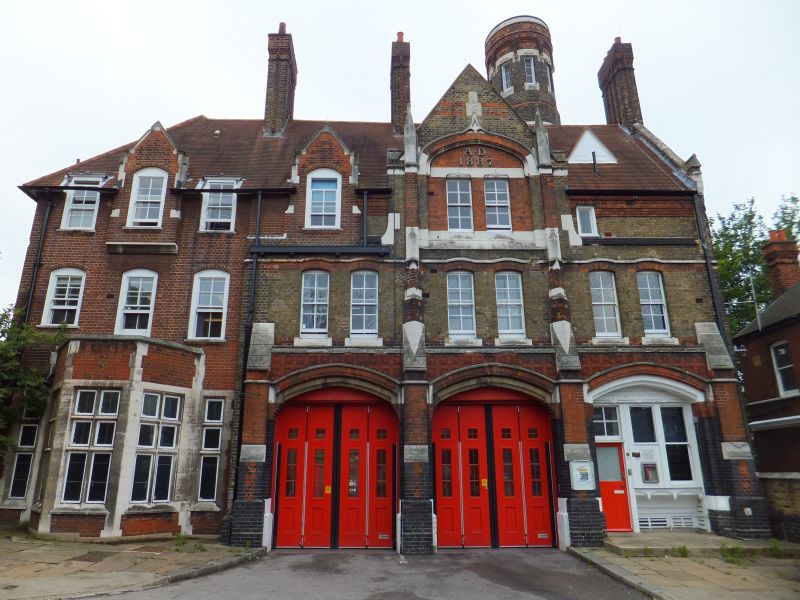 EXTERIOR: The façade has the original block of three appliance bays to the right and extension of one bay to the left, containing a canted bay window with stone mullion and transoms. The appliance bays have moulded segmental arched openings, with terracotta diapering in the spandrels, and are flanked by buttresses with stone pinnacles; the central two openings are still appliance bays, although the doors have been replaced, and the bay to the right was converted some time ago into a public entrance and control room. The first floor contains pairs of sash windows in the 1887 section, a trio in the c1910 section. A fourth pair of sashes sits in the central gable in the older section, flanked by red brick pilasters or ribs terminating in pinnacles, which continue on the same vertical line as the ground floor buttresses. Metal lettering affixed to the gable reads 'AD / 1887', set into a segmental arch of rubbed red brick. The two gabled dormers breaking through the eaves, one in the extension and one in the adjoining bay of the older portion, are both additions of 1910. All the windows are modern timber sashes, replicas of the originals. To the right, behind the roof ridge, rises the striking watchtower. The five-storey, round tower is on an octagonal base and has windows under moulded heads; it is a rare surviving feature and notable for its height. To the rear, the tall sash windows with rubbed red brick flat arches on the northern return and sections of the rear ground floor date from the 1887 build. The upper storeys appear to have been rebuilt when the station was extended in c1910; the window openings here have headers arranged in a segmental arch and tile sills. There are single storey storage sheds in the yard which retain their original doors and contribute to the special interest of the building.

INTERIOR: The main areas which contribute to the special interest are: the ground floor of the c1910 extension, formerly the mess room, which has arched alcoves which may once have contained seats, a large arch to the bay window, dado panelling and a fireplace with tiled surround; the appliance room which is lined with glazed bricks with a frieze of decorative tiles; the staircase which retains its original handrail; the sliding pole houses with some of their original doors; the accommodation on the first and second floors which retains its plan form (comprising both individual rooms for single fireman and small apartments for married fireman and the station officer), a number of fireplaces with timber surrounds, some built-in cupboards and a safe; numerous original timber doors which also survive. The tower is of particular interest and retains its timber hose-drying chamber, cleverly positioned in the central well of the staircase by which the lookout post is reached.

HISTORY: Fire services in London emerged principally from the need for insurance providers to limit their losses through damage to buildings and property in the period after the Great Fire of 1666. Initially each insurer maintained a separate brigade that only served subscribers until the foundation of an integrated service in 1833, funded by City businesses. In 1866, following an Act of Parliament of the previous year, the first publicly-funded authority charged with saving lives and protecting buildings from fire was founded, the Metropolitan Fire Brigade. Under its first Captain, Eyre Massey Shaw, the Brigade undertook an ambitious expansion programme of which a station at Woolwich, built near to the present station in 1868 but now demolished, was a part. By the 1870s, a distinctive fire station-type of identifiable, landmark building had emerged from the previous practice of adapting or emulating domestic buildings. The use of the Gothic style became more elaborate in the 1880s under the influence of MBW architect Robert Pearsall who, after 1889, headed the new Fire Brigade Section of the London County Council. Woolwich Fire Station of 1887, which replaced the earlier station, is a good example of Pearsall's work and now quite rare as only a small number of his stations survive. Derived from the influential plan of Southwark Station, Woolwich is romantic in its detailing (which includes pinnacles, buttresses and terracotta decoration) and has a striking watchtower. Of other Pearsall stations Holborn, West Norwood, Kentish Town, Shadwell, North Kensington and Camden Town have all been demolished; only Tooley Street, Bishopsgate and Stoke Newington survive and all but the last are listed Grade II.

REASONS FOR DESIGNATION: Woolwich Fire Station is listed at Grade II for the following principal reasons:
* special architectural interest as a surviving example of an MFB fire station by Robert Pearsall;
* attractive façade of 1887 with romantic detailing and distinctive tall watchtower;
* sympathetic extension of c1910 by the LCC Fire Brigade Division.