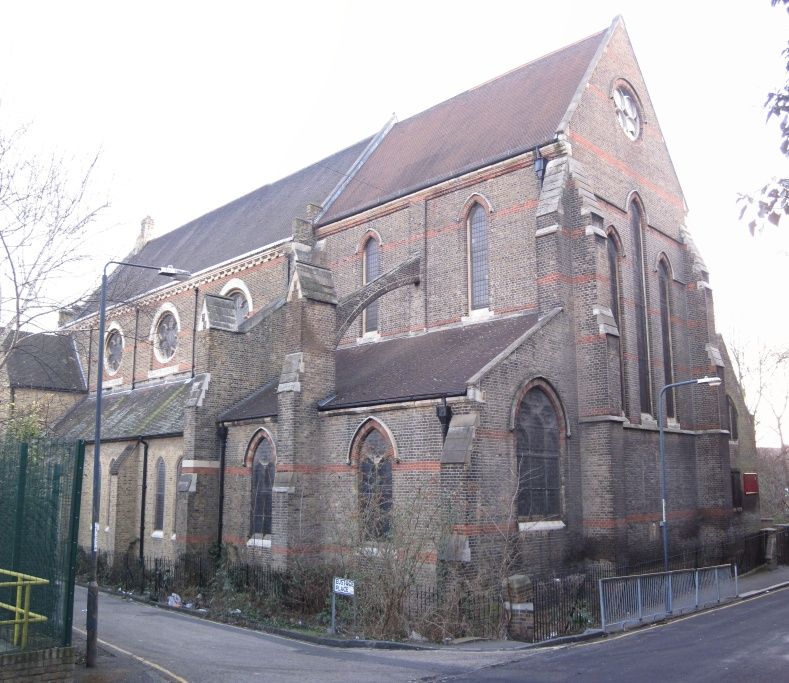 BORGARD ROAD SE18
Church of St Michael and All Angels

II
1875-77: chancel, chancel aisle, organ chamber and vestries by John William Walter. 1888-89: three and a half bays of the nave and arcades by William Butterfield. 1898-99: west front by W.D Caröe to Butterfield's design. 1955: narrow south aisle by Thomas Ford and Partners.

The church is oriented north-north-west/south-south-east so all directions are given here are liturgical.

EXTERIOR: This is a tall, powerfully designed church in a C13 style. The detailing is quite simple and the building was intended to create a grand effect without great expenditure. The two bay chancel which butts on to the road has tall lancet windows, two on the south, one on the north and three graded ones for the east window. Above the latter in the gable is an oculus with tracery. The south chapel has two two-light south and a three-light east window, all with Geometrical tracery. A prominent buttress divides the chapel into two bays, rises through the eaves and is linked to the chancel by a flying buttress. A further larger buttress occurs at the south aisle/chapel-nave/chancel junction but is solid, having no flying component. The nave, which runs at the same height as the chancel, is dominated by three huge circular sexfoil clerestory windows. The lean-to south aisle is more unassuming with three bays with pairs of plain lancets and a tall but still plain two-storey west bay with three lancets at ground level and two tall narrow lancets above. The north elevation is unfinished, the north aisle never having been built. A large area of vertical tile hanging forms a `temporary' finish for much of the middle part of this north wall. At the west end there is a large five-light Geometrical window and in the gable chequerwork at the apex.

INTERIOR: The inside of the church is an impressive space. The nave has four bays with circular piers and octagonal capitals. Perhaps the outstanding feature of the interior is the wagon roof over the nave with sexpartite divisions in each bay and a great deal of now faded decoration. The chancel and south chapel are vaulted in brick. Between the nave and chancel is a tall chancel arch with shafted responds.

PRINCIPAL FIXTURES: The fittings reflect the strong Tractarianism of the church's founder. The south chapel acquired a second altar in about 1880 and has tripartite reredos with low-relief figures. In a corner is a sacrament house of 1927 by Cecil Hare who made various changes to the church about that time. The reredos over the high altar is grander and was made in 1892 by Cox and Buckley to the designs of the architect-priest Ernest Geldart in Low Countries taste. Of marble, alabaster, blue Corsham stone and slate, it has angels statues (made in Bruges) left and right of a central painting of Christ enthroned. Geldart also provided low arcading left and right of the reredos, replaced with panelling by Hare in the 1920s. Elsewhere in the chancel surviving fittings of 1878 include the oak choir stalls made by Harry Hems of Exeter, and the encaustic tile pavement by Webb and Co. of Worcester. Below the windows of both chancel and nave there are friezes in rectangular panels with biblical scenes. The painted decoration in the chancel and over the chancel arch is of various dates, the insipid figures against the east wall (by F.A Jackson of Ealing, working under Hare) arriving as late as 1928. The lower part of the sanctuary walls are decorated with ashlar work and zig-zag tile patterns of 1890. In the nave both font and pulpit are typical Butterfield fittings as are the low benches. The unusual wooden lectern is probably not his. The largest item is the elaborate oak chancel screen and rood of 1903 (designer unknown) which are a memorial to the founder of the church. Of later fittings the most significant are the war memorial altar, dossal and large crucifix on the south side at the west end by Ninian Comper, 1919. Following war damage most of the older stained glass has gone. The Lady Chapel windows are by Goddard and Gibbs.

SUBSIDIARY FEATURES: A remnant of the associated school to the north west of the church.

HISTORY: The origin of the church was a High Church mission to the poor, of the kind that ministered to other deprived parts of Victorian London. The instigator was the Rev. Hugh Ryves Baker (1832-1898), a fervent Tractarian, who came from a family in Co. Limerick and who was ordained as a priest at Exeter in the 1850s. He worked to the north of the Thames at St Mark, Silvertown before coming to Woolwich in 1865. He secured the site for a 'tin tabernacle' church and a timber-framed and corrugated iron-clad schoolroom which went up on the future church site. Permanent schools were built in 1870-1, designed by J.W Walter, the architect for the first phase of the new church. Fund-raising for this started in 1873 and the foundation stone was laid on 15 July 1875 by the Bishop of Rochester. Building, by the firm of Kirk and Randall went on until 1877. The consecration was in 1878. Apart from St Michael's the only other surviving building identified as being by Walter is a Battersea board school, Westbridge (formerly Bolingbroke Road) School of 1873-74. His output in England was limited by the fact that he went to the United States in 1880 with Peter Paul Pugin, presumably to help with some of Pugin and Pugin's church commissions there.

Walter's departure for America meant that another architect had to be involved for the completion of the church which was being considered in the 1880s. This was William Butterfield (1829-1899), one of the greatest of all C19 church architects, but then nearing the end of his long career. His designs were quite different from Walter's and provided a nave of great visual strength externally. Even so the church was not finished then and the west end had to wait until 1898-99 and the involvement of another major church architect, W.D Caröe (1857-1938). Caröe also produced a highly ambitious scheme for building a tower but this never proceeded further than the drawing board. The idea of building one aisle was mooted in late 1913 but the Great War scotched any hopes of this and the final building phase was eventually in 1955 when the south aisle was added by Thomas Ford and Partners.
The resulting church, although the work of a series of different architects, is a fine building in the great tradition of church-building in poor areas of London whereby a large imposing building was the aim but using economical materials and design

REASONS FOR DESIGNATION:
The Church of St Michael and All Angels, Borgard Road, Woolwich is designated at Grade II the following principal reasons:
* It is a large, imposing multi-phase urban church begun in the late C19 with progressive additions until the mid-C20.
* It has a number of fixtures by significant designers and craftsmen of the late C19 and early C20.