A Grade I Listed Building in Brooke, Rutland 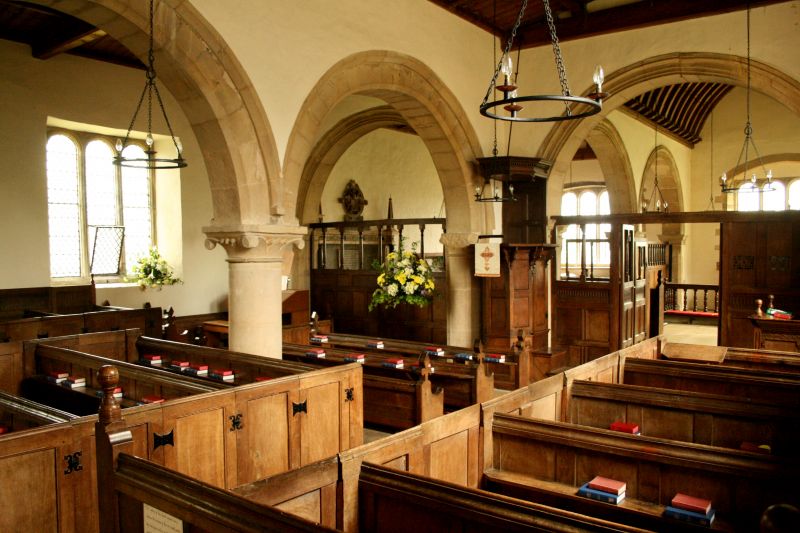 Small parish church partly of C12 but with C13 west tower, perpendicular
S. aisle, and N . aisle and chancel of c 1579. It was restored in 1888,
but this apparently had little effect on the interior. Coursed squared rubble
throughout. West tower, nave with 2 aisles, chancel. Tower of 3 stages with
2-light plate traceried opening to bell chamber, with pierced wood shuttering
and foliate capitals to shafts. Lancet windows in 2nd stage, and embattled
parapet, corbelled out, above. Buttressed S. aisle with square headed windows
restored C19. South porch has plinth and round headed archway beneath a coped
gable. The South doorway has outer arch of C12 with twisted rope hoodmould,
and double zigzag arch. The inner arch is pointed, though formerly round,
supported by slight shafts, each arch being roll-moulded. The chancel is
higher than the nave, and of ashlar, with square headed windows, made up
of round arched lights. North aisle and chancel aisle also ashlar, with steep
coped gables. 2-light window with squared hoodmould in west wall.

Inside, North arcade of 3 bays, norman, with double chamfered arches on
circular shafts with volute capitals and square abaci with chamfered corners.
Pointed early English arch to tower, with triple chamfer and 2 slender shafts.
N. aisle as wide as the nave with door (blocked externally) round arched
with ornate door furniture including scorpion-like hinges. Chancel arch and
2 bay arcade between chancel and N. chapel, are Elizabethan, moulded round
arches on chamfered square shafts.

Chancel roof is C19 - a wagon roof with good timbering.

Elizabethan furnishings and fittings throughout - in the chancel, are 2 box
pews with square panels and a frieze - ornate snake-like hinges on the doors.
Over the frieze, and open-work band with turned balusters. The South pew
has been made into a tiny vestry and this openwork filled in with fretted
woodwork. Wall panelling in S. wall has scrolly and ornate arabesque-style
frieze. Altar rails with turned balusters, and the alter table, chancel screen
and that between chancel and N. chapel are panelled with a widely spaced
balustrade above. In the nave a lectern and pulpit with sounding board, box
pews and wall panelling with frieze and ball finials.

In the North chapel, a large memorial to Charles, son of Andrew Noel d 1619
aged 28. Alabaster recumbent effigy in flat aedicule: blank columns capped
by obelisks above the cornice, which has lozenge and foliate decoration,
and coat of arms in the centre. The figure is in armour, and lies on a woven
pallet. Behind and below the figure are tablets bearing epitaphs. The monument
is painted in red, green, gold and black.

Front is C12, a square basin on square base, arcaded, and with pyramidal
wood cover.