A Grade I Listed Building in Sidbury, Devon 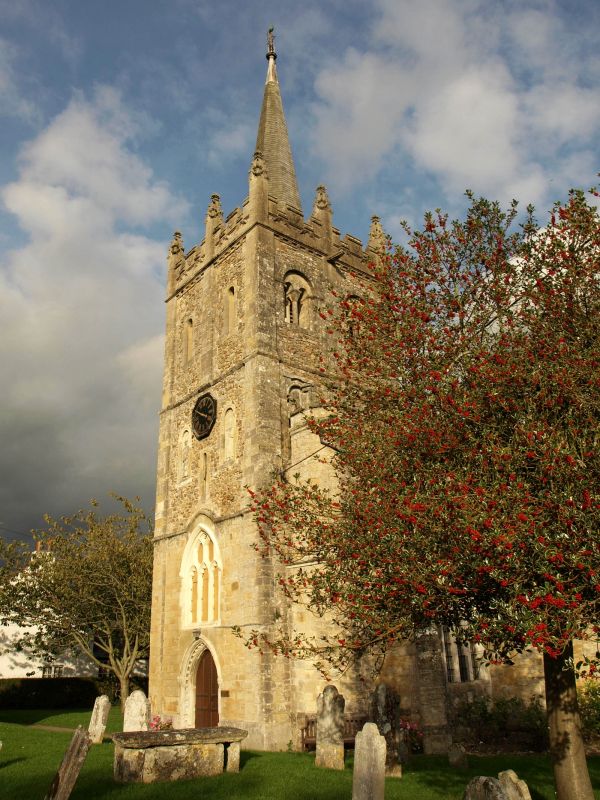 EXTERIOR: The church is an imposing building in the centre of the village, displaying work of various periods, and is surrounded by a churchyard. At the W end is a large and important Norman tower. It is of three stages with very shallow pilaster buttresses at the corners. The S face has a later polygonal, embattled stair turret rising to near the top of the second stage. The ground storey has a pointed W doorway and above it a three-light Perpendicular window. The second stage has pairs of small Norman windows, those on the W face containing two full-length standing bas-relief figures of a bishop and a saint discovered in 1843 and probably dating from the 12th century. The belfry stage has pairs of two-light openings, separated by a flat pilaster. The openings have belfry windows have round-arched lights with a shafts in between (the E face has a single-light opening). The embattled parapets and eight pinnacles date from 1884-5 as does the slender, recessed shingled spire. Otherwise the S elevation presents the two-storey embattled S porch in the second bay from the W, the gable of the S transept and the Norman chancel. The porch has a plain outer doorway and diagonal buttresses: in the second stage is a sundial. A stoup is cut in the wall E of the entrance and two table tombs abut its S walling. Inside the porch is stone vaulted between its two stages and has a large carved boss in the centre. An embattled polygonal stair-turret is placed in the angle of the aisle and W face of the porch. The aisle has three three-light Perpendicular-style panel tracery windows (with 19th-century tracery). A similar, taller window is located in the S face of the transept. The E face of the S transept has a three-light grouped and graded lancet window. A fragment of Saxon interlace, perhaps of the 10th-century, is built into the exterior of the S transept W wall.

The Norman chancel is faced with ashlar blocks and has a corbel table of grotesque heads round it at eaves level. It has a small round-headed single-light window on both N and S elevations. On the S side there are also a two-light Geometrical window (at the W), a plain priest¿s door and a two-light Perpendicular window towards the E which is set above an empty tomb recess. The E window is of three lights with 19th-century panelled Perpendicular tracery. Below it is a highly unusual area of Norman chequerwork decoration cut into it in situ. On the N of the chancel is a vestry under a catslide roof and having a series of reused Norman heads in the corbel table. There is a two-light Geometrical window corresponding to that on the S. The E window of the transept also corresponds to that on the S and a similar window is found in the N wall. The aisle N wall has three three-light panel-tracery windows (tracery 19th-century).

INTERIOR: The walls are plastered and whitened. There is Transitional work in the chancel arch and three-bay arcades. The S arcade with large round piers, octagonal capitals and double-chamfered pointed arches is of c1200, the N one similar but perhaps a little later. One of the N piers has been replaced by a Perpendicular one with four shafts and four hollows. There are further single arches to the transepts with engaged shafts. The arches from the aisles to the transepts have ornate decorative work of the Perpendicular period, the soffits being carved with a foliage trail. The wagon roofs over the nave, aisles and transepts also have decorative enrichment to create a similar effect but with different detailing. In the tower there are large, unmoulded diagonal vaulting ribs: they rest on four early 12th-century carved corbels with two lion masks, a lion and a crouching Atlantean figure. Between the transepts and the chancel are pairs of squints. There are many fragmentary remains of wall paintings. Those on the N side of the chancel have painted columns with stiff leaf capitals and there is another similar piece, much worn, in the N transept. Over the tower arch is what may be a St Christopher. In the gable over the chancel arch is a 16th-century vine-trail.

Beneath the chancel and approached via a trap door is a crypt, 2.82m E-W and 3.2m N-S. This is appears to be pre-Conquest, having been filled in when the Norman chancel was built. The walling is plain, stands to c0.9m and is of chert with quoins of Beer stone.

PRINCIPAL FIXTURES: The barley-sugar altar rails are Jacobean. The octagonal font, decorated on its bowl with quatrefoils and panelling on its base is Perpendicular: its plain cover, of ogee shape, is Jacobean. At the W end of the nave the gallery survives, dating from 1620 but altered in 1754. There is a good set of chancel fittings designed by Walter Cave whose family lived at Sidbury manor: the stalls are of 1899 and have small inset gesso panels. The altar is also of 1899 and behind is a reredos of 1904 with gesso panels and a depiction of the Crucifixion. In the SW of the church is an attractive alms box and panelling behind with gesso panels of 1899, again by Cave. At the W end of the S aisle are four 17th-century charity boards. The nave seats are attractive, well-made square-ended benches of oak. There is stained glass of 1899, 1902 and 1906 by Kempe. The E window is of 1913 and was designed by Cave.

SUBSIDIARY FEATURES: W of the southerly churchyard gates and built into the churchyard wall is a fountain and drinking trough of 1887 under a gabled head, commemorating Queen Victoria's Golden Jubilee.

HISTORY: The structural history of the church appears to be traceable for a thousand years. The small crypt under the chancel is thought to be Saxon and probably represents a relic chamber. There is important and extensive Norman work which suggests the church had attained its present length in the 12th century. The transepts appear to be of the 13th century while there is a late medieval imprint too, as is usual in this area. Post-Reformation activity can be traced through the W gallery and font cover. Much restoration took place in the 19th century. In 1843 John Hayward was responsible for rebuilding the upper part of the tower and placing a pyramid spire on it. This was removed and the top of the tower altered during the 1880s restoration by J T Micklethwaite and Somers Clark. Micklethwaite also worked on the chancel at the end of the 1890s at around which time Walter Cave was responsible for some highly attractive furnishings.

The architects: John Hayward (1808-91) was a leading church architect in Devon in the mid-19th century. His practice was based in High Street, Exeter. He also designed the Royal Albert Museum in Exeter, built in 1865-6.

John Thomas Micklethwaite (1843-1906) became a pupil of G G Scott in 1862 and commenced independent practice in 1869. He was partner with Somers Clarke (1841-1926) from 1876 to 1892. He was an expert ecclesiologist, a learned antiquary and a strong High Churchman. Important books by him are Modern Parish Churches of 1874 and The Ornaments of the Rubric of 1901. He is buried at Westminster Abbey.

REASONS FOR DESIGNATION:
The church of St Giles and St Peter, Sidbury, is designated at Grade I for the following principal reasons:
* It is of outstanding interest as a church with a long structural history, probably stretching back to Saxon times as represented by the crypt.
* The church contains important Norman and Transitional fabric along with work of the 13th century and the Perpendicular period. The vaulting in the tower, the treatment of the arches from the aisles to the transepts and the decoration of the roofs is of particular interest.
* It contains various fixtures of interest, notably the W gallery, font and cover and a series of high quality items of c1900 designed by the architect Walter Cave FRIBA whose family lived at nearby Sidbury Manor.