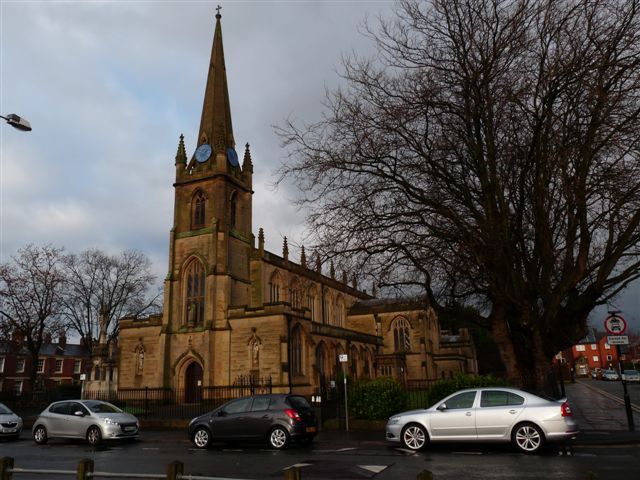 Roman Catholic church. 1833-6, by J.J.Scoles of London,
chancel and chapels added 1858 by J.A.Hansom; altered 1885-6
by M.E.Hadfield & Sons, and G.Webster. Chisel-dressed
sandstone ashlar, slate roofs. Nave on north-south axis with
east and west aisles; south tower with spire, flanked by
chapel and baptistry (added 1912), east and west transepts,
and chancel with east and west chapels. Perpendicular style.
The tower, of 3 unequal stages with set-back buttresses, has
the main doorway recessed in a 2-centred arch with inner and
outer moulding and a crocketed ogee crest, above this a tall
2-centred arched 3-light window with Perpendicular tracery and
a pedestal-mounted statue on the sill, a set-back belfry stage
with louvred 2-light windows, an embattled parapet with
crocketed corner pinnacles, short flying buttresses from these
to an octagonal spire with clock-faces, lucarnes,
roll-moulding to the angles, and an apex cross. The flanking
baptistry and chapel are square, with parapets, each with a
niche statue in the front wall and a large traceried 3-light
window in the side. The nave is tall and narrow, the aisles
low and broad, both of 5 bays, the aisles with buttresses and
wide Tudor-arched 3-light windows and the nave with pilaster
strips and large 3-light clerestory windows, all these windows
with Perpendicular tracery and hoodmoulds, and both with
parapets, those of the nave with tall crocketed pinnacles
(some missing). The transepts, slightly lower than the nave,
have large 4-light traceried windows, and in the angles with
the aisles small added porches. The chancel, 4 bays beyond the
transepts, has pilaster strips and 2 traceried clerestory
windows in each bay except at the north end which has only
one, and various gabled side chapels on both sides in similar
style.
INTERIOR: 5-bay aisle arcades with clustered piers and moulded
2-centred arches, inner shafts carried up to meet slender wall
shafts of roof trusses, which have cusped open-arcading; organ
loft in tower, with choir gallery projected into nave; large
transept arches in similar style, and confessionals at the end
of each (added 1885); 3-bay chancel with arcades also in
similar style but with annular caps to the shafts, hoodmoulds
to the arches, and angel-corbels to the wall-posts; sanctuary
with large transomed window; inner and outer chancel aisles,
with chapels at the north ends, various elaborate reredoses
etc.