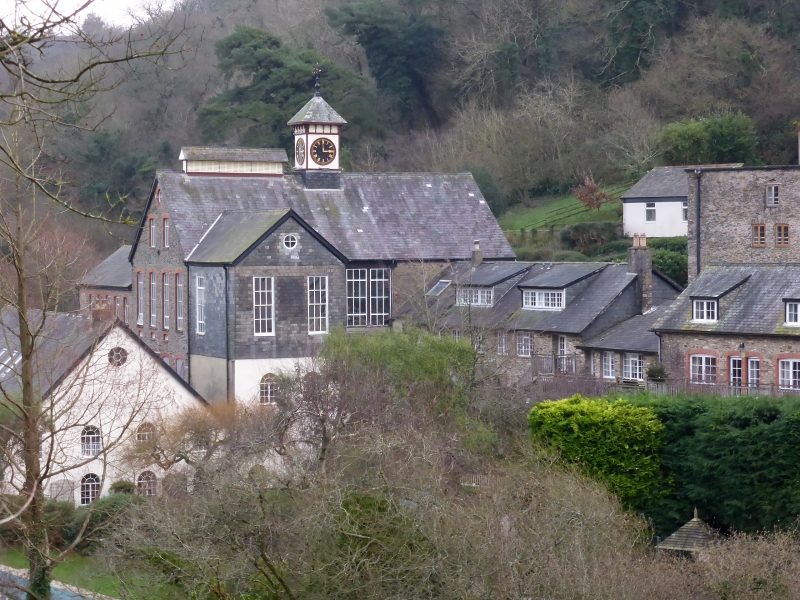 Paper mill converted into holiday accommodation. Dated 1889 (datestone
H.S. 1889); converted into holiday accommodation in late C20. Mainly
slate rubble with red brick window and doorway dressings. West elevation
of north range is rendered with ashlar joint lining and partly slate hung.
Welsh slate roofs with gabled ends and black glazed ridge tiles. wing on
Plan: The main block in on a NNW-SSE (say N-S) axis has a broad wing on
the east side and a low narrow wing on the west side. At a lower ground is
level across the north end is the vat house and in the angle to the east is
a single storey detached range.
Exterior: Built on a steeply sloping site on various levels with range of
1, 2 and 3 storeys. The tall main block is south gable at higher ground
level has 3 large segmentally arched windows with keystones and 2 smaller
similar windows above with datestone. H.S. 1889 in between and bullseye
above in the gable. This block has similar n orth gable end, its west
elevation is partly glazed with a large 4 light window from eaves to the
second floor level and a slate hung gable-ended slightly lower wing to left
(North west) Over the ridge of main block a large Italianate clock
turret, square on plan hung at its base, boarded above and with a clock
face on each side with small louvres above under the deep bracketed eaves
and hipped slate roof with an ornate metal finial and weathervane. To the
north of the turret on the ridge of the main range a louvred ventilator
with a gable-ended slate roof, segmented headed windows on the north and
south sides and in the gable end wall a bull's-eye.
At the lower level across the north side of these 2 blocks a gable-ended
single storey range with round headed cast-iron frame windows with glazing
bars, end walls have 2 storeys of these windows and a bullseye in gables,
the west end is rendered and east end has wide round-arched doorway to
right with keystone and C19 6-panel double doors with a fanlight above.
Also at east end, in the angle with main range, a small single storey
gable-ended building with large round-headed windows with keystones, frames
and a doorway, with fanlight with glazing bars and plank double doors.
Also in north east angle a single storey detached range with round-headed
windows and a lunette and west gable end and bullseye in east gable both
with keystones. At the south west side of the main block is a long and
irregular single storey range which on its north side is built on a
revetment and has C20 casements and raking roof dormers.
Interior: The north rage was complete late C19 roof of soft wood the
trusses with both king and queen-posts with struts and with boarded roof.
The other roof also seem to retain their late C19 roofs.
Note: This building appears to be an extension to the earlier paper mill
(Tuckenhay Mill (qv) which is said to have begun work in 1829. It produced
high quality hand-made paper and was the only surviving 'vat'-mill in Devon
(Hoskins).
Source: W H Hoskins, Devon (published 1954) page 322 (under Ashprington
parish).