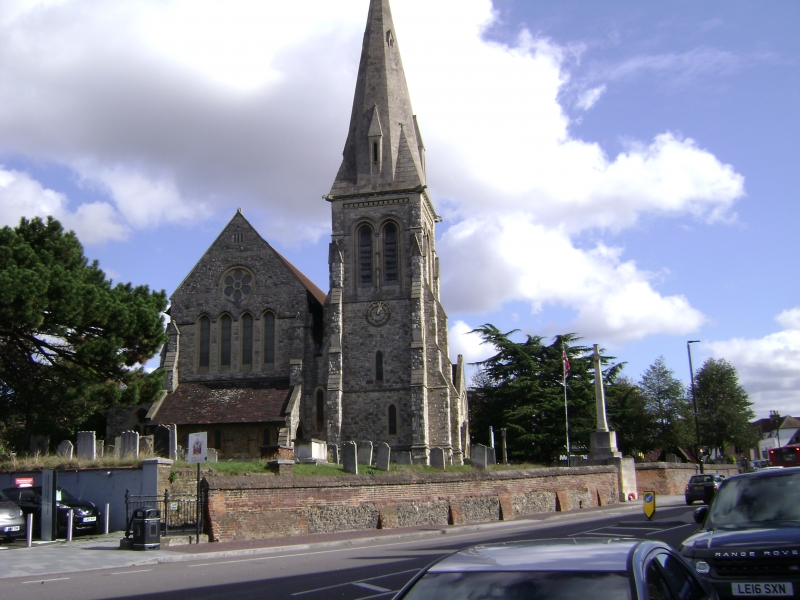 EXTERIOR: A large Early English style church on a prominent road crossing in the centre of Eltham, and of good proportions and massing. The most conspicuous elevation is on the south and its most prominent feature is the southwest steeple which doubles as a porch. It is of three stages and has large angle buttresses. The two lower stages are quite plain while the third has pairs of large lancet belfry windows with a slender shaft with shaft rings between them. The tower supports a broach spire with tall broaches and low-set, elongated lucarnes on the cardinal faces. Higher up on the intermediate faces is a small set of lucarnes. There is a large clerestory to the five-bay nave with the westerly windows having four lancets set under a superordinate arch. The middle two lancets are of equal height and are flanked by lower ones. The east bay has a single light. The aisles have lean-to roofs and their bays are demarcated by off-set buttresses, each bay having a pair of lancets. A large south transeptal chapel leads off the southwest part of the chancel. Its south window has three graded lancets under a superordinate arch. There is a similar arrangement at the east end of the chancel but with five lancets. At the west end there is a lean-to narthex-porch (now church office) with north and south entrances and lancets alternating with blind arches in the west wall. Above is a row of equal-height lancets and above these a sexfoil circular window. Added to the north of the Victorian vestry is a plain parish room of c.1980.

INTERIOR: The interior is tall, spacious and rather spartan, due in large measure to all the surfaces being painted white. The nave and aisles are separated by five-bay arcades with double-chamfered arches carried on circular piers with moulded capitals and bases. The chancel is of the same width as the nave and the two are demarcated by an arch also with double chamfering and springing from tapering corbels and a short semi-circular shafts. The same style is use for the arches from the chancel to the organ chamber (north) and the chapel (south). The five-sided nave roof has tie-beams and crown-posts while that in the chancel is keel-shaped.

PRINCIPAL FIXTURES: The aisle walls have a number of monuments from the previous church. None are of particular distinction but as a collection they add much to the character of the building. The oldest is late C17 and is at the east end of the north wall of the north aisle. Adjacent, on the east wall, is a C18 tablet to J. Bott with a weeping woman by a sarcophagus, designed by J. Bacon and made by S. Manning. Several fixtures remain from the 1870s rebuilding. The font, originally at the west end of the north aisle, now at the west end of the nave is a typically robust mid-Victorian piece whose bowl has gently rounded lobes carried on a shafted polychromatic base. At the east end the church has a plain wall but there is said to be tiling under the white paint. The pulpit is wooden and has open tracery-work. The pews have shaped ends and are not original to St John's but came from St Mary, Lambeth after this church was turned into the Museum of Garden History. The east and west windows contain glass of the 1950s by B.E.E Barber and B.Thurston and is typical of its time. Victorian stained glass survives in a number of side windows.

SUBSIDIARY FEATURES: Immediately south of the south transept is a grey granite cross on steps, a memorial to Richard Mills, 1901. At the southeast corner of the churchyard is an attractive timber and tiled lych-gate on a stone plinth. The churchyard wall to the south and east is a separately listed (Grade II) structure dating from the C16 and C17.

HISTORY: Plans to rebuild this, the old parish church of Eltham, seem to have begun in 1872. By that time Eltham had acquired a new church, Holy Trinity, and new National Schools, and the existing building was considered most inadequate. The application for funds to the Incorporated Church Building Society contained the usual kind of complaint about the old church which was the product of much rebuilding in the late C17: 'The Building is most wretched - built of plain Stock Bricks very thin walls and the Windows plain window frames'. The north aisle, reported as being added in 1670, was 'in a very bad style and the Nave is in a decayed state'. The new church was consecrated on 3 August 1875 and included 716 seats, 120 of them for children. The architect, Arthur W Blomfield (1829-99) was one of the busiest Victorian church-builders. He began practice in 1856, and had a career spanning nearly half a century. He was knighted in 1889 and was awarded the RIBA Royal Gold Medal in 1891. The interior was given a major transformation in 1973-4 under Thomas Ford. The result is that the interior is now very much a hybrid of the late C19 and the late C20. The work has involved stripping out of the Victorian reredos, chancel screen (part of it resited in the northwest nave arcade arch), subsidiary screens, painting all the surfaces, and flooring the building with carpet.

REASONS FOR DESIGNATION:
The church of St John the Baptist, Eltham is designated at Grade II for the following principal reasons:
* It is a large, mid-Victorian church by a well-known architect and whose fabric is largely intact.
* It has retains some fixtures from the C19 rebuilding as well as wall tablets from the previous church.