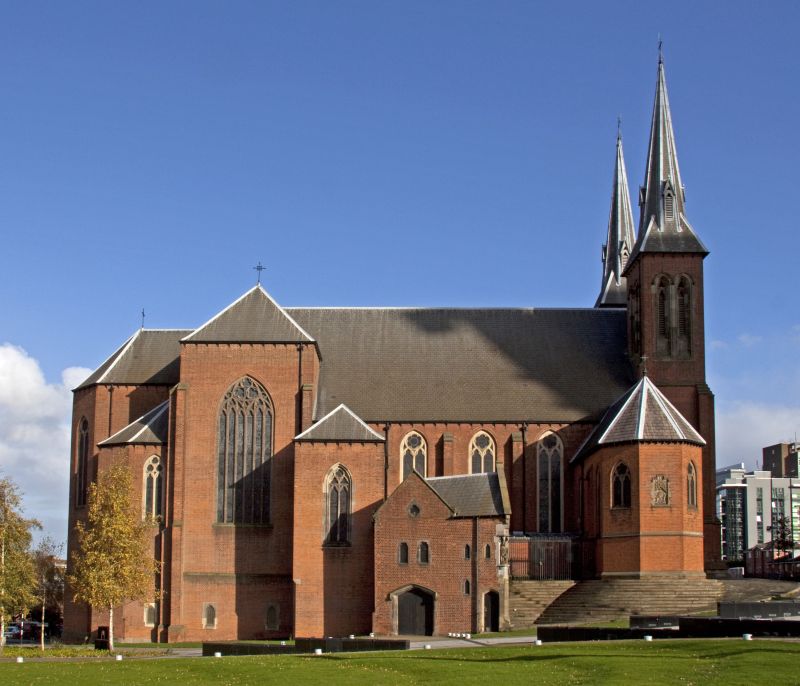 Roman Catholic. 1839-41, by Augustus Welby Northmore Pugin but very much mutilated both in itself and in its setting. Red brick; slate roof. In a C14 German style with a short chancel with flanking small north Lady Chapel and south vestries, an aisled nave apparently with shallow transepts, a north baptistery with stairs down to the crypt below and a north-west chapel of 1933 and 2 thin west towers with needle spires. Arcade of 5 bays with immensely tallslender clustered shafts; a sixth, taller and broader bay marks the 'crossing', Modern west gallery with organ. Their steeply pitched timber roof embracing nave and aisles and suggesting a crossing by means of lateral hips. Tall 2-light windows to chancel and nave. The furnishings now mostly gone. The concave-sided hexagonal pulpit with statuettes of Doctors of the Church is a piece made by Pugin from one of circa 1520 obtained probably from St Gertrude's Abbey, Louvain. The Archbishop's Throne and the stalls incorporate late C15 carved woodwork from St Mary in Capitol, Cologne. Still surviving some of Pugin's stained glass made circa 1845 by W Warrington and there is other glass by Hardman and Co of circa 1865. Also by Hardman and Co, brass to the Rev John More +1856; he stands but has a pillow behind his head. In the crypt only the arch of the easternmost chapel now has any of Pugin's painted patterning. In the crypt, too, monument to Bishop William Ullathorne OSB+1889. He lies in episcopal vestments with, on the wall behind him, a large painted tablet showing him being presented to the Virgin and Child by St Bernard and an angel.