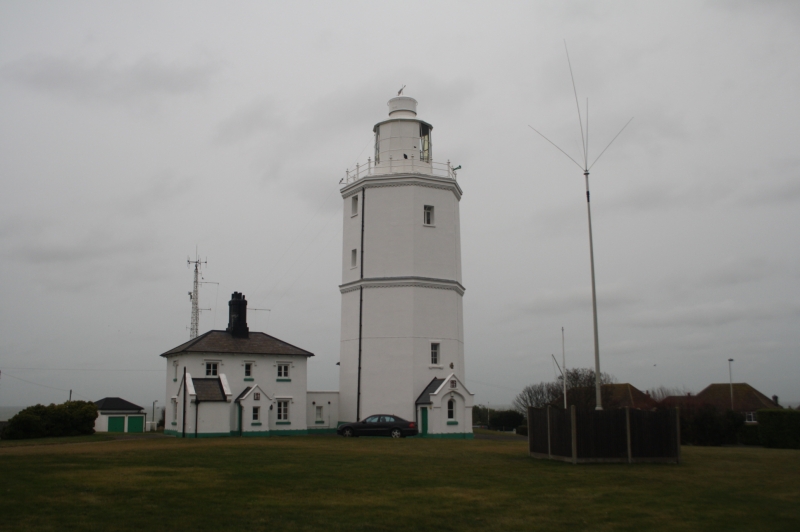 Lighthouse with two attached Lighthouse keepers houses. Lighthouse built in 1691 increased in height in 1793 and again at the end of the C19. Lighthouse keepers houses added c1860. Lighthouse comprises stuccoed octagonal tower of two stages, battered to base with moulded cornice at the top, moulded band half way up and plinth. The height of the tower is 57 metres. Circular lantern house above with platform round it added in 1890. Gabled porch with kneelers, slate roof and crest was probably added in the later C19. The Lighthouse is flanked by the two Lighthouse keeper's houses attached by one storey stuccoed windowless corridors. These are stuccoed with hipped slate roofs with clustered central brick chimneystacks with four flues each. Two storeys; three windows. Wide bracket eaves cornice. Casement windows with hoodmoulding and central gabled porches with kneelers and crest. The windows to the rear elevation are blank.
HISTORY: A light was first used at the North Foreland in 1499 but the first real lighthouse was built by Sir John Meldrum in 1636. This comprised a two storey structure of timber lath and plaster with an iron coal burning grate on top and was destroyed by fire in 1683. A twelve metres tall tower was built in 1691 constructed of brick, stone and flint, later rendered over. Originally coal-fired, the fire was enclosed in a glazed lantern in 1719 but this was removed in 1730 after complaints from shipping. In 1793 a further two storeys were added and the coal fire replaced by 18 oil lamps. Trinity House purchased the lighthouse in 1832. The lighthouse keepers cottages were in use from c1860 to 1995.