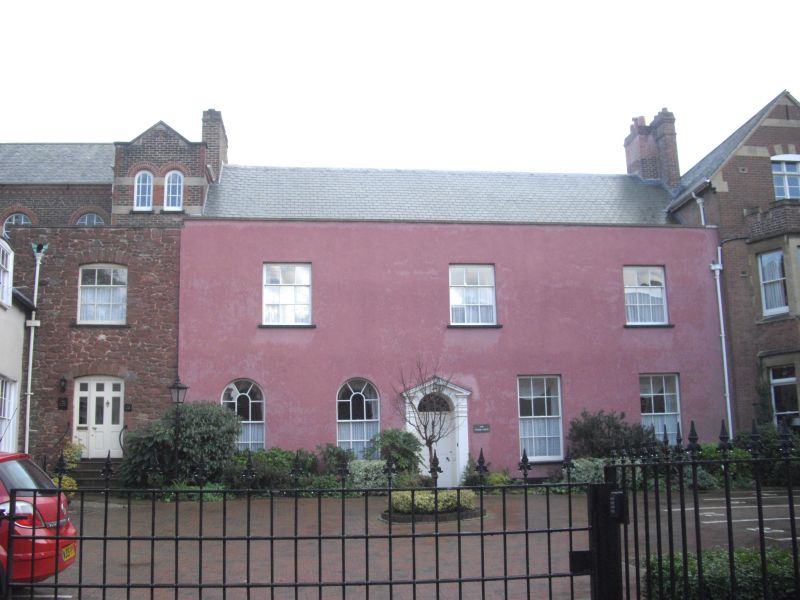 School, formerly the house of the Archdeacon of Exeter. Mid/late C15, with C16
north-east service wing and various C19 additions and alterations, principally c1830, when older ranges remodelled and C15 extended by a parallel range to front; 1928 extension including chapel. Rendered over local stone rubble, with 1928 range of brick with stone dressings; C19 brick stacks to slate roofs. PLAN: L-shaped plan, the main block on a roughly NE-SW axis with C16 wing projecting to NW (left of front); the C15 roof lies in central range of main block, in range which faces SE onto rear garden, with a c1830s parallel addition facing onto front (NW) making a double-depth plan; at right angles and to right (SW) of front, is a late C19 wing which abuts a mid C19 range, roofed parallel to main block and facing onto rear garden; 1928 range including upper-floor chapel to
left (NE) of front, with an early/mid C19 block separating this from the C16 wing which projects to NW.
EXTERIOR: 2-storey central block, with early C19 addition having 3-window Parapetted front facing NW towards Palace Gate; 3/6-pane first-floor sashes, over 6/6-pane sashes to right and semi-circular arched glazing bar sashes to left of
open-pedimented doorcase, with panelled reveals and door.
Taller late C19 gabled bay to right, with plate-glass sashes and stone mullions to canted bay. Similar early C19 sashes to bay on left of central range. Projecting C16 wing, of one storey and attic: 3-window front, remodelled c1830, has 3/6-pane sashes to half dormers, 8/8-pane sash in wooden architrave to first-floor left, above 6/6-pane sash and adjoining flush-panelled door with overlight in similar architrave; half dormers are roughly set over tripartite early C19 sashes to right, flanking panelled door set in heavy doorcase with bracketed canopy. The rear, garden, front has 2-storey 3-window central range, with C19
glazing bar sashes, bowed oriel with C20 glazing to left and semi-circular arched doorway with Gothic smith tracery to half-glazed double doors. Mid C19 2-storey range to left (SW) has 2 full-height canted bays with horned plate-glass sashes. Tall 1928 addition to right (NE) includes projecting 3-storey porch with alternate stone voussoirs to arch,semi-circular arched windows to chapel with deep ashlar impost band and canted sanctuary end. INTERIOR: includes early C19 staircase, joinery including panelled doors and shutters, marble fireplaces and decorative cornicing; C16 roof to NW service wing. The principal feature of the building is the exceptionally fine mid/late C15 six-bay side-purlin roof, designed as a series of variant base-cruck trusses with intermediate trusses.
Richly moulded detail below tie beam level, with evidence for bosses at junction of intermediate trusses, purlins and windbraces, and for carved decoration on cusp terminals. Main trusses have arch braces set under tie beam, which rests on massive square-set arcade plates and is supported by a straight blade set into a projecting sole plate. More slender A-frame trusses above the tie beam with curving arch braces. Spandrels created between the wall plate, lower blade and arch brace and between the lower blade, tie beam and arch brace are infilled with boards pierced with decorative cinquefoil-headed mouchettes. Much slighter intermediate trusses, each fixed to ashlar post and underside of a common
rafter couple. At the bottom they are cusped and widened to clasp the underside of the arcade plate, where it is joined to an upper curving brace to the upper common rafter A-frame. Some original common rafters survive, the north-east bay (to right of front) having the seating for a smoke louvre or lantern. One of the finest C15 roofs in southwest England, of national importance and distinguished by its base cruck form, upper roof construction and the quality of its moulded and carved detail, the latter bearing strong similarities to a local group of high class late medieval roofs - including the Deanery and the Law Library in the Cathedral Close.
(Report by Keystone Historic Buildings Consultants, August 1992).
This item was also formerly listed as item 6/362A, Part of the Convent of the
Presentation of St Mary, Palace Gate.