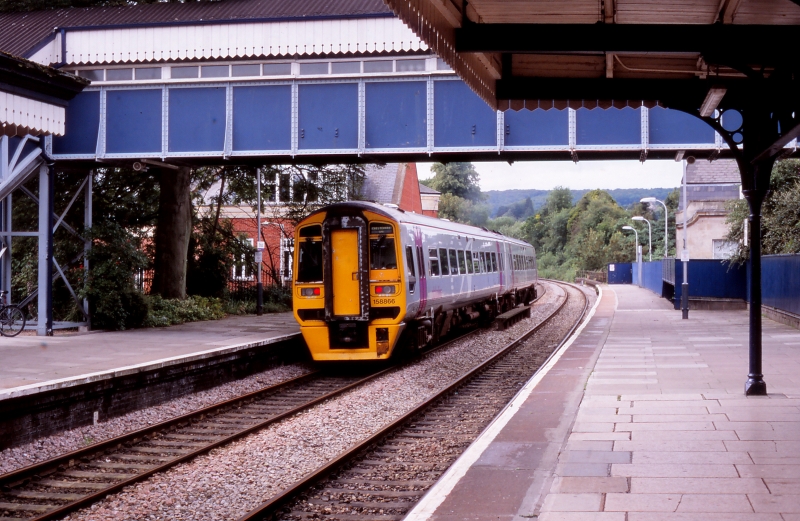 STATION ROAD
SO 8405
5/504
Railway Station
and footbridge
II
Railway station and footbridge c.1845 with additions of 1890 and 1914. Probably
by I K Brunel, for the Cheltenham and Great Western Union Railway, additions for
Great Western Railway. Limestone rubble and ashlar with Welsh slate roofs. The
up platform is a Brunel 'cottage' with extensions of 1890 and 1914. Bridge to
down platform probably 1914. Earliest building (up side): Coursed ashlar
limestone on chisel dressed limestone plinth projecting chisel dressed limestone
quoins and raised ashlar dressings to windows. Ashlar chimneys, (one partly
re-built in reconstructed stone) with high level drip course mouldings. Parapets
to gables and blue Welsh slate roof. Platform canopy-with dogs tooth or chevron
timber fascia, supported partly on cast iron cantilever brackets with circular
motif. Down platform building c.1914: coursed ashlar limestone with projecting
details, plinth and ashlar surrounds to flat arched doorways, all generally
detailed to match earlier building on up platform. Platform canopy and low mono
pitched roof with modern felt covering. Various chamfered timber mullion and
transom windows with some opening casements to both buildings. Original up
platform building is rectangular in plan with projecting wing on north-east side,
with extensions to re-entrant angle, and at both ends. Down platform building is
rectangular plan with bay window at south-east end. Interior of both buildings
divided into various station offices, waiting rooms etc, with no features of
particular interest. Steel and timber covered footbridge links up and down
platforms at north-west end. Platforms at north-west end carried over valley and
roadway on bridge and blue engineering brick viaduct. Group value with viaduct,
railway goods shed (q.v.) and Hill-Paul Mill building to south-west. Building
originally for C and GWUR with Brunel as consultant engineer. Taken over by GWR
in 1844. (GWR Magazine July 1946, AGM Report 1936 for C and GWUR).