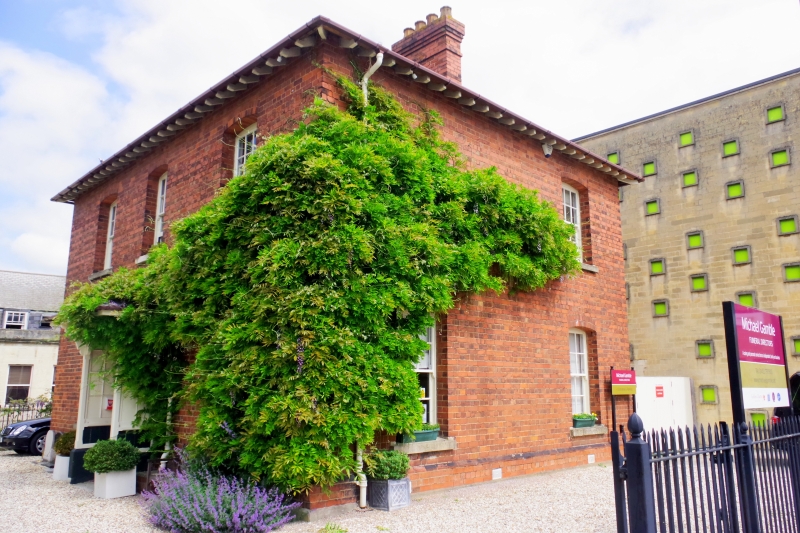 A station master's house of c.1883-1901, built to the Great Western Railway's Standard Class `C' house design. A house of three bays and two storeys, of red brick with moulded brick plinth, with shallow hipped roof and projecting eaves, and paired lateral stacks of red brick.
PLAN : The building is roughly square on plan, of double depth with two rooms each to front and rear, and an attached single storey wash house to the rear of the building.
EXTERIOR : Main elevation, facing the railway, has central entrance door with timber porch on chamfered vertical timbers, with glazed sides and hipped roof; entrance door has glazing to upper panels and fielded panels below, with a triple light window above. Windows to ground and first floors have segmental headed openings with brick voussoirs and stone cills; those to the ground floor are six-over-six sashes, those to the first floor are eight-over-eight. The wash house to the rear has an apex roof projecting forward to provide a covered entrance to the rear of the building, with hardstanding of engineering bricks set as paviours. The rear entrance has a plank and batten door in a segmental arched opening with brick voussoir.
INTERIOR : The ground floor has a central staircase hall with principal rooms to either side. That to the right has original black marble fire surround with cast iron fireplace; both rooms have original moulded cornice, doorcasings and skirting boards, and four panelled doors with mouldings. The stair has plain stick balusters set obliquely, with moulded handrail, and the staircase hall is panelled below the stair. To the rear, the kitchen retains its high fire surround and skirting boards. The scullery has a plank and batten door with ventilation holes to the understairs cupboard, and another plank and batten door to the walk-in pantry, which has a row of wrought iron bacon hooks in situ. To the first floor, the principal bedrooms have original skirting boards, doorcasings and ornate wooden fire surrounds with oval-mirrored overmantels and cast iron grates. The rear bedrooms have smaller, moulded timber fire surrounds and iron grates, and their original skirtings and doorcasings. The bathroom retains its cast iron claw footed bath, and original basin and lavatory. Doors to the first floor are also four panelled, but without mouldings. Several of the timber sash windows retain their fittings for blinds. The wash house to the rear has a two light, six pane timber casement to the front, with a plank and batten door; the interior has a built in 'copper' with its original plank and batten lid.
SUBSIDIARY FEATURES : the plot in which the station master's house sits is bounded on the east by the cutting carrying the adjacent road under the railway, and on this side the plot retains its original brick retaining wall and iron railings.
HISTORY : The station master's house is part of a group which also includes Stroud's GWR railway station, (listed Grade II), and the Goods Shed (listed Grade II*) and the Imperial Hotel (unlisted). The station was built c.1845 to I K Brunel's design for the Cheltenham and Great Western Union Railway, later taken over by the Great Western Railway. The Goods Shed is also by Brunel, and also dates from c.1845. The plot on which the station master's house stands was purchased by the Cheltenham and Great Western Union Railway in 1843, two years before the station opened, but a building does not appear on the site until some point between 1883 and 1901 (map evidence). The house is built to the design of the GWR's standard Class `C' house, and remained in the ownership of successive railway companies until 1985.

SUMMARY OF IMPORTANCE : In order to meet the criteria for designation, railway structures dating from post-1840 must demonstrate some historical or technological significance; architectural interest; intactness; rarity; and group value. The former Station Master's House is a rare, virtually intact survival of a standard Class `C' house for the Great Western Railway, dating from the 1880s. The house is a robust building of historic interest in its connection with the GWR, and with some architectural pretension. Station House also demonstrates clear group value with Stroud's station buildings (1845 and later), erected to Isambard Kingdom Brunel's design (listed Grade II), and the Goods Shed (1845 and later), also by Brunel (listed Grade II*).