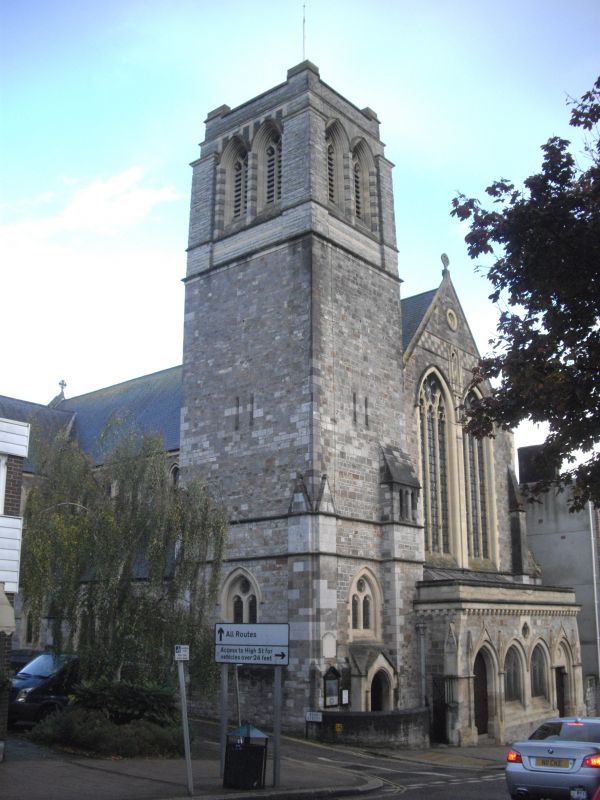 Roman Catholic Church, of 1883-4 in the Gothic style by Leonard Stokes, in partnership with C E Ware.

Roman Catholic Church, of 1883-4 in the Gothic style by Leonard Stokes, in partnership with C E Ware.

MATERIALS: constructed of purple grey sandstone with dressings, probably of Bath or Portland stone, under slate roofs with coped gables.

PLAN: fronting onto the street and orientated south-west to north-east. It has a roughly cruciform plan with an apsed chancel at the east end and a tower at the north corner.

EXTERIOR: the tall gabled west front to the street has a low porch or narthex with a pair of three-light pointed windows with elaborate tracery, flanked by two entrance doors. There is a dentil cornice. Above the narthex, lighting the west end of the nave, are two three-light windows with tracery and hoodmoulds. Set between the heads of the windows is a statue niche and above this is a band of alternating coloured stone blocks and an occulus. There is a further entrance in the base of the tower and above it a two-light window with a quatrefoil in plate tracery, and a similar window to the north face. Above the lowest stage, the tower rises sheer to the bell-stage which has pairs of two-light traceried windows to each face and a plain parapet. The north aisle fronting Bear Street has pairs of two-light traceried windows matching those in the tower, while the nave clerestory has triplets of plain lancets with a continuous hood mould. The clerestory is continued on the transept side walls. The gable wall of the north transept has three tall lancets with a large traceried rose window above. The sanctuary has an apsidal end with a hipped roof and nine tall windows of single lights with geometric tracery.

INTERIOR: there is a low-vaulted narthex and a tall broad nave with five-bay arcades of chamfered and moulded arches carried on octagonal columns of polished Portland and Pocombe stone with moulded stone capitals and bases, and an open timber roof. The north aisle is wider than the south. Both the south aisle windows and those of the clerestory have inner arcades. The baptistery has wrought-iron gates and railings; the font is modern. Beyond the crossing, the tall, pointed sanctuary arch is flanked by narrower bays with pointed openings at lower levels with canopied images and pairs of canopied images above under a blind pointed arch. In the east walls of the transepts are pointed arches opening to the side chapels. Both the chapels and the sanctuary itself have elaborate floors of inlaid wooden blocks of Italian origin. The nave has a vaulted roof which was replaced in 1989, and the sanctuary has a seven-sided roof with arched braces.

FITTINGS: the church is richly fitted out; the furnishing include elaborate reredoses in marble and alabaster to the high and side altars designed by Scoles; a north transept altar with a similar reredos set against a mural painting of West Country saints by Bernard Collier (1894); marble sanctuary rails with enamel panels to the railings and gates; a wrought-iron rood screen depicting the crucifixion scene (1886) in the tympanum of the sanctuary arch; a large quantity of stained glass mostly attributed to Devon glassmaker Frederick Drake; some of the glass in the north aisle was installed in 1934 to commemorate the golden jubilee of the opening of the church. The organ dates from c1893 (restored in 1988) and was built by Hele and Company, and the single bell which was hung in 1884 is dedicated to St Boniface.

Mass was said in Exeter more or less continuously from the mid-C18 in a series of rooms in secular premises. The present Church of the Sacred Heart is built on the site of the Bear Tavern, the former town house of the Abbots of Tavistock, which became an inn after the Dissolution. Its west end fronts directly onto South Street, which slopes markedly from north to south. The adjoining presbytery, a red brick town house, to the south side is listed at Grade II.

The Roman Catholic Church of the Sacred Heart was designed in 1881 by the architect Leonard Stokes in partnership with C E Ware, a local engineer, and was built in 1883/4 at a cost of approximately £10,000. It is the earliest surviving work by Leonard Stokes, when he was in partnership with Ware, and before his mature style developed. Stokes's first work, also built in 1883, was St Patrick's Church School in Woolston, Hampshire which was demolished in 1969. Pevsner described the Church of the Sacred Heart as 'not worthy' of Stokes; it does appear to be a little cramped on its site in South Street, with the slope making the building appear rather squat.

The church tower was not completed until 1926. The original design included a spire but this was not added.

The Roman Catholic Sacred Heart Church, which dates from 1883-4, designed by Leonard Stokes in partnership with C E Ware, is listed at Grade II for the following principal reasons:
* Architectural interest: a well-detailed and executed example of Gothic Revival architecture with good detailing and use of materials;
* Architect: the earliest surviving work of Leonard Stokes, one of the leading figures in the move towards a freer interpretation of Gothic in the late C19;
* Furnishings: a rich collection of late-C19 fittings including several ornate reredoses, sanctuary rails with enamel panels; a wrought-iron rood screen, and a large quantity of stained glass;
* Group value: it forms a good grouping with the adjacent presbytery and a Baptist church of 1823, both of which are listed.