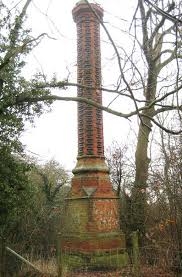 Stench pipe. Probably mid C18 and part of the C18 sewage system for the now demolished Belhus
Hall. It comprises a tall octagonal Tudor-style chimney built of hand made bricks with occasional
black brick dressings, moulded to top and bottom and standing on a chamfered rectangular plinth
of 3 stages. A brick built culvert runs from the site of Belhus Hall to the foot of the south side of the
chimney and an opening on its north side lies beside a rectilinear earth channel. To the east and west
of the chimney the channel is revetted in brick. The chimney probably acted as a foul air vent for
sewage flushed into and then pumped along the culvert. From the culvert the sewage was possibly
deposited into the earth channel where after settling it was spread onto nearby fields. The chimney
also acted as an eyecatcher. Included as an unusually elaborate and ornamental example of a rare and
interesting building type.