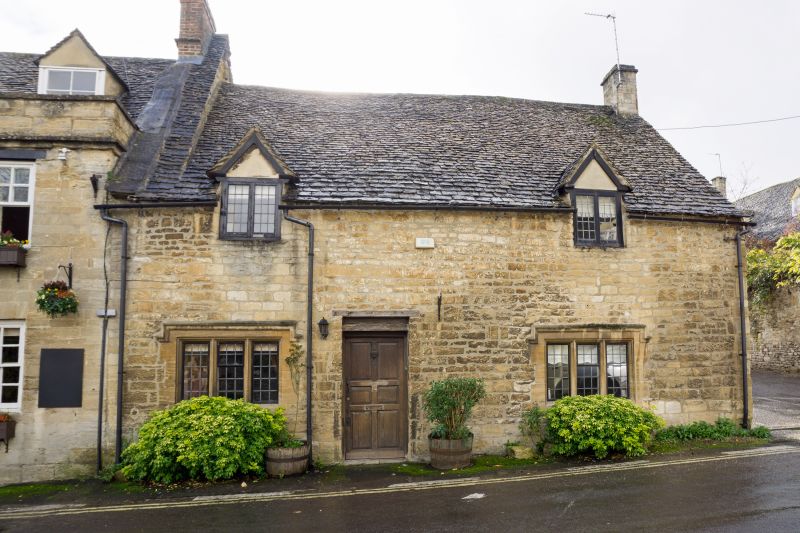 Mediaeval house. Early C14, altered in C15 or C16, later part of stables
of Bull Hotel (q.v. in High Street) and converted to dwelling late C20.
Front remodelled C17 and mid-C19. Coursed rubble with Cotswold stoneroof.
Plan unclear, basically L-shaped. Single storey and attic; gabled half
dormer to left, two C20 3-light mullion windows on ground floor with
drips, 6-panel door with wooden lintel to left of centre. Gable to west
at different pitch with shaft emerging from chimney-piece below and base
of (lost) mediaeval chimney. Gable to East has blocked openings including
a reused jamb stone with bead-mould. Lower extension to rear. Rear has
2:1 windows and hipped C20 porch in angle masking a fine pair of late C13
or early C14 doorways set L-wise. The interior is remarkable. The walls
in the front part are later insertions. The plan is a large room with not
directly opposed doorways and a kitchen wing to rear. The front room has
an arcade of 4 bays (interrupted by C19 chimney) against the (skew) west
wall, below were shelves, above were cupboard doors; the ceiling is
carried on unconvincing joists; above is a room with against west wall a
fireplace whose jambs have the same ovolo mouldings as the cupboard arcade
below and whose lintel has a crenellated top (later adapted as joist
bearers) from which a single ovolo moulded shaft rises to apex of
gable. Squint in wall to left of fireplace to quatre-foil (blocked)
gable-light. The back room is reached by on each floor a stone, formerly
pointed arch, doorway with ball flower ornament, the upper one is not in
line and is presumably reset, this bay must have been open to the roof,
raised cruck with arch braced collar and evidence of wind braces; blocked
opening to east, perhaps (lost) stair turret. Blocked hatch at ground
floor between the two parts. Evidence of disturbance to 1st floor south
windows. A drawing of 1840 shows the front with an arched and moulded
doorway and a left-hand window with ball-flower in the left-hand jamb,
perhaps this was re-used for 1st floor door to kitchen wing, note however
that like the ground floor doorways it has a segmental-headed rere-arch.
The arcade of shelves and cupboards in the ground floor room is surprising
and presumably to do with the display of merchandise or storage of it.
One assumes this was a wealthy merchant's house to judge from the detail,
but could it have been something else perhaps collegiate - eg a lazar
house or hospice - see the buttery serving hatch?
See M. Laithwaite; Perspectives in Urban History (1973 ed. Everitt).