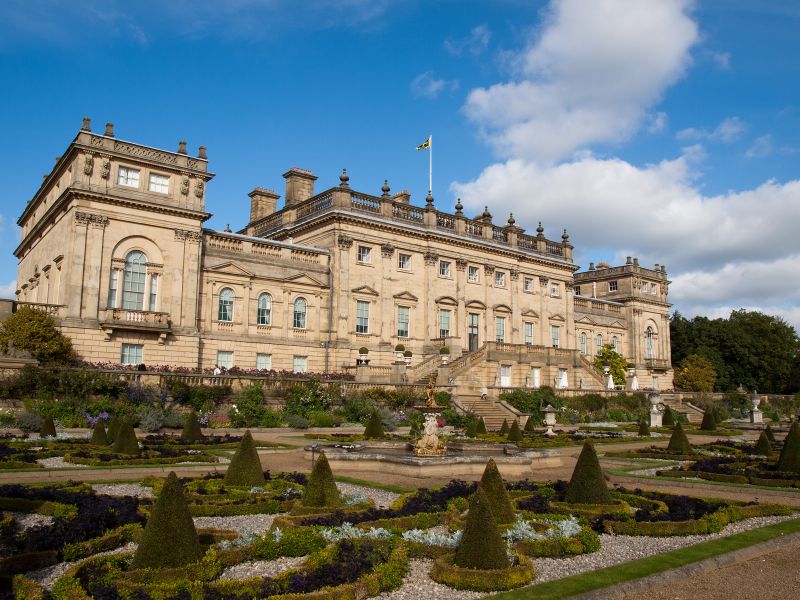 I
Country House. 1759-71, the central part of the house by John Carr, the two lateral extensions and wings by Robert Adam (Swarbrick, p. 194). Interior 1765-77 by Robert Adam for Edwin Lacelles, 1st Lord of Harewood; altered and heightened 1843 by Sir Charles Barry for the 3rd Earl of Harewood in an Anglo-Italian style; interior modernised and some alteration c1930 on a scheme by Sir Herbert Baker executed by Brierley and Rutherford (York) for the 6th Earl of Harewood and his countess, Mary, Princess Royal.

INTERIOR: Carr's Palladian plan was altered and modified by Robert Adam with a semicircular court which was abandoned in 1762. Adam decorated the house in a Neo-classical manner. The Entrance Hall is in form the least altered of Carr's designs and has giant Roman Doric demi-columns, painted wood to look like porphyry; opposite the entrance is deeply-recessed archway flanked by niches; stucco panels by Collins and medallions by Rose, one with flag inscribed 1767, the date of completion. Opening out to west the Great Staircase: stone double-flight cantilevered from the half-landings has delicate iron balustrade by Maurice Tobin incorporating a honey-suckle design, carved ramped mahogany handrail (Adam's drawing c1769), top-lit by oval glazed dome. Adam employed specialist artists and craftsmen, amongst them the plasterers Dodgson, Rothwell, William Collins and in particular Joseph Rose and his assistant Richard Mott, who did the state rooms; John Devall, master mason to George III, who did many of the marble chimney pieces, the finest perhaps that in the Music Room; the mural decorators Antonio Zucci, Angelica Kauffmann, Giovanni Borganis and Biagio Rebecca; Thomas Chippendale the cabinet maker for frames for mirrors and paintings as well as suites of furniture to Adam's and his own designs. Together they created rooms of high quality decoration. Particularly fine are the Old Library, a well-proportioned room with Corinthian pilasters flanking arched recesses filled with bookcases, and a superb fireplace; Princess Royal's Sitting Room, originally the state bedroom, with Ionic columns distyle in antis flanking bed recess now reduced and filled with fine Chippendale mirror; Spanish Library, with fine ceiling; the Rose Drawing Room and the Music Room, both with fine ceiling complemented by Adam's original carpets echoing the ceiling design. The climax of the house is the Long Gallery which fills the west angle pavilion, lit by Venetian windows on three sides; set between windows large mirrors with oval above painted by Kauffman, and carved wooden window valances to resemble blue taffeta by Chippendale. Superb ceiling with alternating ovals and octagons has border with 18 paintings by Rebecca. In 1989-90 the pillars and pilasters framing the windows, and the original fireplace, all of which had been removed by Barry, were replaced. Barry's most successful alteration is to the Saloon, which he made into the main Library, filling Adam's apsidal recesses with mahogany bookcases; fine chimney-pieces by Van Gelder with pedimented overmantels holding circular medallions by Collins; superb coved ceiling. Less successful alteration by Barry is the Dining Room: Adam's original room and ceiling were destroyed and replaced by an unimaginative pedestrian design with a coved ceiling incorporating the monogram 'H.H.' decorated by John Wagget. Barry also installed new kitchens and domestic offices in the basement. In the 1930s Sir Herbert Baker created a charming pastiche of the Adam style in the Princess Royal's Dressing Room, with plaster decoration.

SUBSIDIARY FEATURES: The main gateway, lodges and linking walls on Harrogate Road, the stables built by Carr to south-west of the house, the bridge over roadway between stables, the double terrace built by Barry to south front of house, the dolphin fountain to west of house, and the terrace cottage to south west of house are all listed.

HISTORY: Harewood House was built by Edwin Lascelles (1713-95) with a fortune inherited from his father, Henry Lascelles (1690-1753). Henry's immense wealth had been accumulated through business connected with the West Indies. He was the fifth son of a Yorkshire landowner - both his father and grandfather had been MP for Northallerton - Henry made his own fortune. Having arrived in Barbados by 1712 to work as a merchant, he married the daughter of a local merchant and slave trader. He prospered as a Barbadian customs collector between 1715 and 1734, despite being accused of corruption, and was employed to supply troops stationed in the Caribbean during the Wars of Jenkins' Ear (1739-42) and the Austrian Succession (1742-8). He established a London business importing sugar, as well as loaning money to West India planters. With a partner he formed a syndicate of merchants to establish a fleet of vessels permanently moored off the Guinea coast to receive slaves for shipment to the Caribbean. He owned one plantation, the Guinea Estate in Barbados, bought in 1738 and sold in 1758. After 1732 he conducted his business from England, where he invested in land, and served as MP for Northallerton from 1745-52. Henry Lascelles established his second son, Daniel, as inheritor of his business, assigning to him vast West Indian loans. By 1748 his eldest son Edwin had been installed as lord of the manors of Gawthorpe and Harewood, bought in 1739. Henry Lascelles's mercantile activity in the Caribbean had provided the income on which the transformation of his family into one of Yorkshire's principal aristocratic dynasties was founded.

In 1784 Daniel Lascelles died, childless, and Edwin inherited an immense portfolio of West Indian property, as planters defaulted on loans and were forced to surrender their plantations. Between 1773 and 1787, Edwin acquired more than 27,000 acres in Barbados, Grenada, Jamaica and Tobago, together with 2947 slaves. When Edwin died, also childless, in 1795, Harewood was inherited by a Barbadian-born cousin, Edward Lascelles (1740-1820), later 1st Earl of Harewood. The owners of Harewood gradually reduced their interests in the Caribbean, although in 1833, the year of the Slavery Abolition Act, Henry Lascelles (1767-1841), who had become 2nd Earl in 1820, owned six plantations and 1277 slaves, for the loss of whom he received £23,309 in compensation.

Henry Lascelles was MP for Yorkshire with William Wilberforce from 1796-1806; in the election of 1807, fought shortly after the passing of the Abolition of the Slave Trade Act, Wilberforce was returned but Lascelles was beaten; one of several issues on which the election was fought was candidates' attitude to slavery, and Lascelles was known to be a plantation owner. He later spoke strongly against the emancipation of slaves. Nevertheless, his relations with Wilberforce were, at least at one time, amicable; the great abolitionist accompanied the slave-owner to inspect sugar-cane growing in the Harewood kitchen garden, and in 1799 Wilberforce's famous singing voice was heard at a concert of sacred music in the Harewood Music Room.

REASONS FOR DESIGNATION
Harewood House is designated at Grade I for the following principal reasons:
* Outstanding country house, displaying the talents of three architects of stature: John Carr, Robert Adam, and Sir Charles Barry
* An exceptional series of neo-classical interiors designed by Robert Adam
* Decoration and furnishings by Antonio Zucci, Angelica Kauffmann, Biagio Rebecca and Thomas Chippendale
* The house is of particular historical interest in view of its well-documented connection with the slave trade; its existence is due largely to the fortune amassed by the Lascelles family in the West Indies. This amendment is written in 2007, the bicentenary year of the 1807 Abolition Act.
* Group value with a number of subsidiary buildings and structures, including Carr's stable block, Barry's southern terrace, and the main gateway and lodges