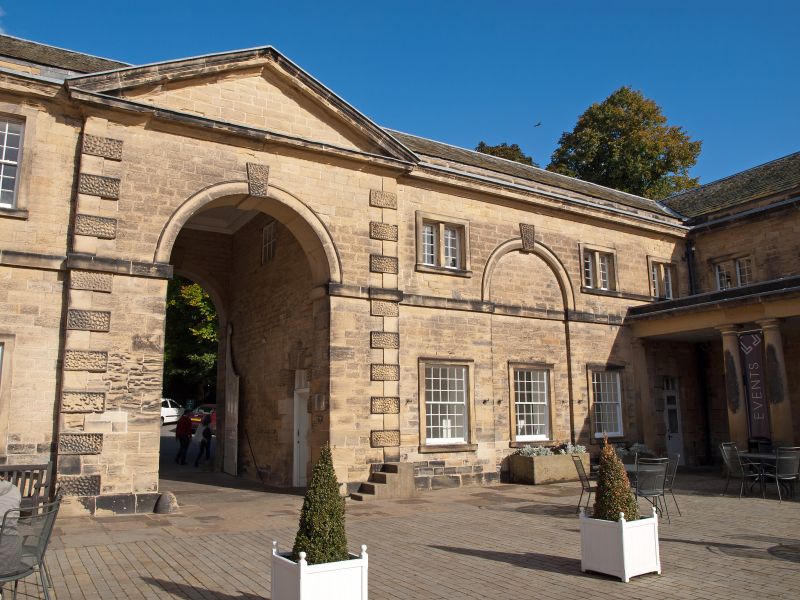 Whittaker (p168) attributed the stables to Sir William Chambers and Pevsner (p247)
too gives the same atribution regarding them as chambers first independent work
c 1755-6. It is known that Lascelles commissioned a design for the proposed house
and stables from Chambers in 1755 and the design for the stable still exists
illustrated by Harris (plate 43) but this heavily rusticated over-elaborate design
was never executed. Mauchline (p24) and Linstrum (p 74) agree that the stables
are by John Carr and point to the existence of an engraving, "A perspective view
of the stables at Gawthorp. Built by Edwin Lascelles Esq 1748", signed "J. Carr,"
which was engraved from a drawing by William Lindley, Carr's pupil (Wakefield Art
Gallery), which seems to settle this long-confused point. Mauchline (p23) gives
convincing evidence however that the stables were not begun until 3 April 1755.
The stables are important in as much as they were an exercise in building by
Lascelles 4 years prior to the building of Harewood House (q,v.),and he could
consider the work of Carr and that of the Muschamp family who were the master
masons, the head joiner James Sanderson and the leadwork of Mr. Rhodes(both
estate workers) - he was happy to employ them all in the construction of
Harewood House. J. Harris, Sir William Chambers: Knight of the Polar Star,
(1970) p40, pls. 43-5. D. Linstrum, West Yorkshire Architects and Architecture
(1978). M. Mauchline, Harewood House, (1974). N. Pevsner, Yorkshire West
Riding (1974). Wakefield Art Gallery and Museums, Drawings and engravings
illustrative of the County of York, x, pl. 7. T.D. Whittaker, Loidis and Elmete,
(1816).