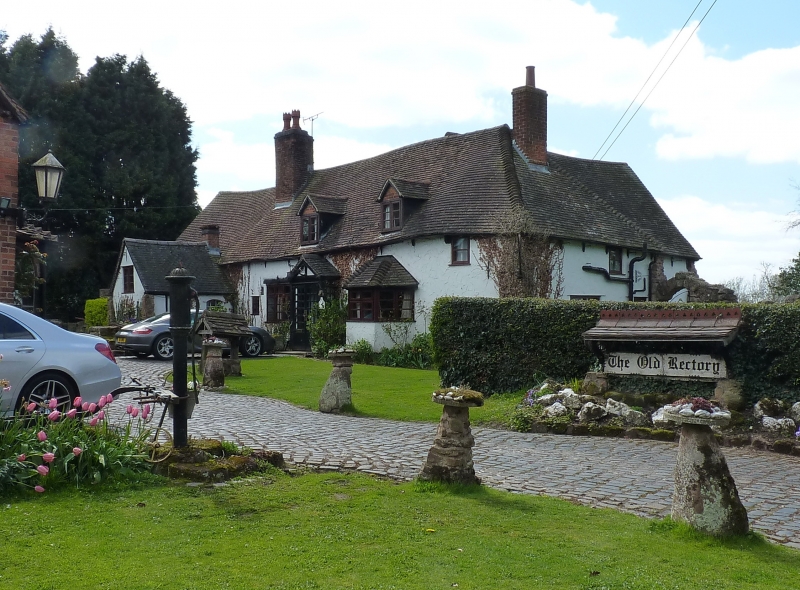 SHUSTOKE SHAWBURY LANE
SP2490 (West side)
Church End
14/199 The Old Rectory
11/11/52 (Formerly listed as Old
Rectory (now cottages))
GV II
House. C14 with C17 additions. Cruck built, on sandstone plinth. Rendered walls,
C20. Plain-tiled roof hipped at north-west end. Two internal stacks of red
brick. Main north-south range with cross-passage away from the hearth and 2
later gabled wings at rear. One storey and attic. 2 modern gable dormers with
wood casements. Ground floor has late C20 bow and canted bays on either side of
doorway to former cross-passage. Small casement to north end. Modern doorway and
door. To south-east end a single storey, C20 extension forms a porch. Interior:
Two full cruck roof trusses of the original open-hall house are visible. Both
have closed walls. The one at the north end was probably the gable end. The
other forms the end wall of the open-hall. Together they are a complete bay of
the original house. The purlins are the only members of the roof structure of
the original building which provide evidence of the extent of the original
house. They extend for at least a further bay which would have been the
open-hall. The crucks rest on a sandstone plinth. They are joined by a yoke
which is surmounted by a King-post and a ridge piece laid flat. One pair of
blades has a rail part of which has been removed to make a doorway. The roof has
principal rafters with paired and curved wind bracing. The braces are laid one
over the other on the back of the principal rafters and secured by a peg. The
purlins are laid over the back of the blade in a shallow trench. They are
inclined. A lower spur is also housed over the blade and carries the end of the
principal rafter on its upper edge. Apart from a chamfer none of the timbers is
moulded. Despite restoration it seems likely that this end bay was floored when
built. The King-post is longer than that at the Bothie, Botts Green, Over
Whitacre (q.v.). However the yoke is probably not as long as the collar or
tie-beam linking the 2 blades of the base cruck at Priory Farmhouse, Bixhill
Lane, Shustoke (q.v.). The house was the birth place in 1605 of Sir William
Dugdale, the antiquary.
(J.T.Smith: Cruck Distributions: An Interpretation of Some Recent Maps
(Vernacular Architecture, Vol.6, 1975))